Could this be RA?

How do I know whether I have Rheumatoid Arthritis? 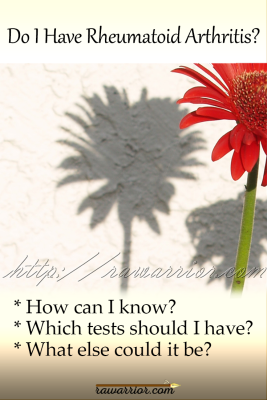 What doctors are looking for is a collection of symptoms or pieces of evidence which point to Rheumatoid Arthritis. They make an RA diagnosis according to guidelines recommended by professional organizations such as the American College of Rheumatology (ACR) and the European League of Rheumatism (EULAR). In October 2009, the guidelines used by ACR and EULAR were updated. The previous guidelines, published in 1987 are still used by many doctors in various countries.

Frequently, Rheumatoid Arthritis symptoms include sharp pains which may migrate through various joints or settle into a particular joint. There may be swelling, stiffness, redness, or weakness associated with the pain. More often than not, the joint attacks are symmetrical. Flu-like fatigue, low-grade fever (about one degree above normal), and a loss of appetite are also common.

What tests help me ask, do I have Rheumatoid Arthritis?

Another antibody measured by a blood test, the anti-CCP (anti-cyclic citrullinated peptide), is more specific to Rheumatoid Arthritis. It is important to run this test if RA is suspected. About 95 to 98 percent of people who have a positive result with this test are diagnosed with RA . And the false positive rate is lower.

There are other more complicated or invasive methods to test for the presence of Rheumatoid Arthritis activity in the body.  This includes various scans or the extraction or examination of tissue. Sometimes, doctors even identify RA with their own eyes during surgery, but that is not a preferred method of diagnosis.

Get thyself to an RA specialist ASAP

Some doctors consider suspected RA diagnosis to be an emergency. Think about this: There is no cure for Rheumatoid Arthritis and early treatment is considered the best hope for avoiding a severe disease course or achieving remission. The time between onset of symptoms and disease treatment ranges from a few months to several years. If you have an opportunity to be a lucky one who is in the shorter end of this continuum, I hope you will.

What else could the diagnosis be if I do not have Rheumatoid Arthritis?

This may be the next question after asking, “Do I have Rheumatoid Arthritis?” There are some other diagnoses which can mimic Rheumatoid Arthritis onset. It is possible for RA symptoms to flare and remit over a period of years without causing detectable damage. This is sometimes referred to as Palindromic Rheumatism or Palindromic RA. Some of these patients eventually are diagnosed with RA.

Parvovirus b-19 or “Fifth disease” symptoms are similar to Rheumatoid Arthritis. Parvovirus symptoms can last for months in rare cases. However, Parvovirus almost always resolves on its own. The symptoms are treated for the comfort of the patient, but there is no need for disease treatment in most cases.

There is a group of autoimmune arthritis diseases which are called “spondyloarthropathies.” They include Psoriatic Arthritis, Reactive Arthritis, and Ankylosing Spondylitis, and some forms of Juvenile Rheumatoid Arthritis. Although outward symptoms may be similar, spondyloarthropathies attack the body differently than Rheumatoid Arthritis. Blood tests and DNA tests can be used to help distinguish them from RA.

More information related to the question Do I Have Rheumatoid Arthritis?

110 thoughts on “Do I Have Rheumatoid Arthritis?”