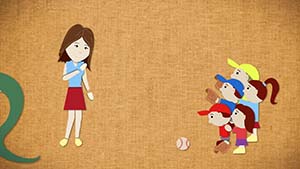 Last year, I got a call from a woman named Courtney floating a trial balloon on creating an animated video for RA patients. After some discussion, I agreed it could be interesting, but with a few “ifs” like if it’s positive, honest and realistic, and if its not insulting to patients. Courtney’s company was hired by Genentech (maker of Actemra and Rituxan) to create the video, and she came up with a draft script, based on our discussion. There were more phone calls, sometimes tense, as I corrected stereotypes and misconceptions that could offend patients – the way most advertisements do.

There were more editing emails and phone calls, and eventually – a final script. And then an audio engineer came to my house to record my reading. And today, I can show you the finished video. Watch the RA Veterans animated video below!  More information about the RAise Your Voice video series is on the RheumatoidArthritis.com website.

Why would we celebrate the inadequate “a” word?

This week, I smiled as I read my friend Elizabeth’s notes for her part in our session at the ACR Oct 29th. I was both startled and delighted to read: “This is an absolutely vile disease.” Maybe that’s how y’all feel sometimes reading my blog – it was a serious document – but I felt validated. Yes, it is a vile disease. Elizabeth’s frankness is refreshing and if we lived in the same city, I’m sure we could get into a lot of trouble together. She has a gentle Georgia drawl and unique insight into medicine, having played different roles in her life: PRD, clinician, and caregiver (her mother had RD).

Anyway, Elizabeth is right – RD is awful and insidious. Its most well known symptom is joint inflammation or “arthritis.” But Rheumatoid is not really a type of arthritis, so as I wrote back in October 2010 (see below for the fascinating history of World Arthritis Day on RAW), it doesn’t have much to do with World Arthritis Day. The day may actually be counter-productive, confusing people about what RD really is – it is a vile disease.

RHEUMATOID DISEASE DOES HAVE A DAY!

Shout it from the rooftops. RHEUMATOID AWARENESS DAY, FEBRUARY 2, is our day! A day to educate and overcome confusion. I hope you’ll get involved in bringing RD awareness to your community or country. Meanwhile be sure to subscribe to the RPF blog so you don’t miss any news.

2013 – Release of new RA Veterans animated video (below), a RAise Your Voice video from Genentech

2012 – Never Mind! 3 Lessons for Evidence-based Medicine and RA, a very important post, but essentially ignoring both Columbus and the “a” word

2011 – Happy Birthday #Rheum for World Arthritis Day, explaining why I created “#rheum” as a hashtag and how it has benefited rheumatology patients and others. (By the way now that hashtags are spreading from Twitter, did you notice it on Facebook?)

2010 – Twitter & a #rheum for the Rheumatoid Online Community, the post which created the hashtag “#rheum” to begin a rheumatology community on Twitter, based in part on the #DOC (diabetes online community)

2010 – BUT FIRST… I published What Does World Arthritis Day Have to Do with RA? on October 11 – very fun to read what I was thinking three years ago & see your 57 responses!

2009 – Columbus Day and World Arthritis Day: Is There a Connection? – Part of a series on historical mysteries and diseases that are similar to RD

17 thoughts on “An Absolutely Vile Disease, the “a” Word, & New RA Animated Video”