It’s bedtime here. How about a bedtime story? Once upon a time in Philadelphia-

After being diagnosed with Rheumatoid Arthritis in 2006, I read some articles from reliable hospitals like Johns Hopkins. Sometimes I looked up symptoms online or read patient comments on large websites like Health Central or WebMD. Eventually I entered discussions with others, mainly to encourage them or link them to helpful information.

The need seemed so great. I found people who were hurting and confused. There was so much conflicting or wrong information and inadequate medical help that some patients felt like they were “atypical” or “crazy.” I decided to create a website, Rheumatoid Arthritis Warrior, with a blog that could speak to the reality of RA from a patient point of view. In May 2009, I began RAW, and by fall the first version of the site was complete.

The American College of Rheumatology scientific meeting was in Philadelphia that year. I was absorbed by the few news reports online. A friend who attended encouraged me to someday bring the patient voice to ACR. We can blame him for the rest of this – really. 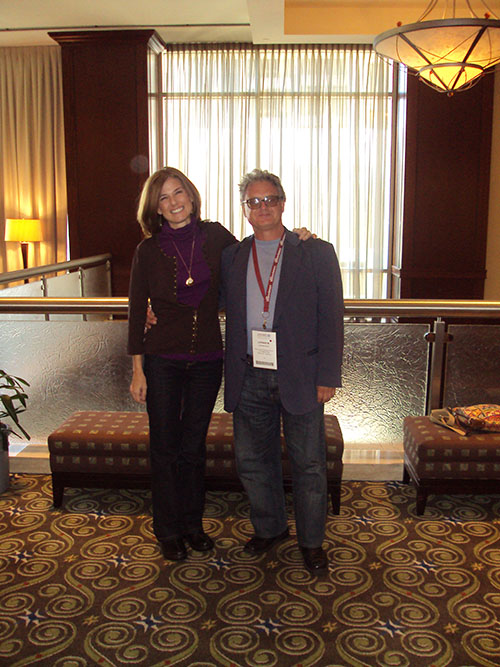 In 2010, I applied to ACR for a press pass to cover the meeting for our growing patient community. It took a little wrangling, but I got it. To prepare to be the patient with a press pass, I spent weeks resting up, working from bed, getting injections (spine and fingers), and new medications. I had to buy closed shoes (God forbid).

During that week in Atlanta, KB and I got to talk face to face with some top researchers, as well as people I’d met online including a rheumatologist from the other side of the world (the first ever #RHEUM TWEETUP!) and a patient who became a dear friend. I also had good meetings with pharma peeps and an ACR official.

Did I learn some things about Rheumatoid Disease and medical research? Yes. But the most significant result was an enduring conviction about the critical need for the patient voice to participate in rheumatology. Within a few weeks the Rheumatoid Patient Foundation that friends had dreamed with me about was born. 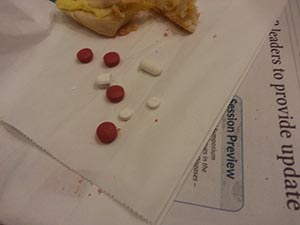 In November 2011, I reported from the ACR meeting in Chicago and the RPF presented its first exhibit with about a dozen volunteers from around the country. We passed out brochures and posters and met with people from industry and organized a fabulous 2nd ever #rheum Tweetup with patients, doctors, and industry peeps. It’s not possible to tell you in a few short words how hard it was and how much work was required. But we knew we’d taken huge steps for rheumatoid-patientkind. 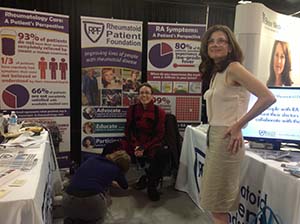 In November 2012, the RPF presented new brochures and posters, and expanded its exhibit with beautiful vertical banners. We videotaped two healthy volunteers wearing the arthritis simulation suit, including Dr. John Davis, our advisor from Mayo Clinic. A friend in industry organized the 3rd #rheum Tweetup, expanded to over 25 people – a groovy mix of doctors, patients, and industry reps. 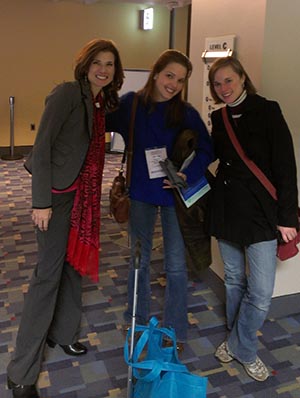 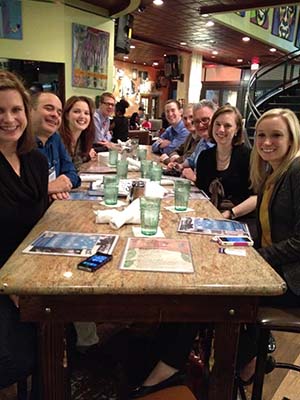 From even this extremely brief overview, you can see that each year, we’ve expanded the presence of people with Rheumatoid Disease (PRD) at the ACR. This year, we’ll present

3) Three brand new RPF brochures, including ones on methotrexate and treat to target.

And this year I’ve persuaded our dear friends at AI to participate with an exhibit. The San Diego Convention Center won’t be exactly overrun with PRD, but there’ll certainly be more than there ever was at ACR before.

The story is yet to be told of the 2013 meeting coming up in just 10 days. But there’ll be at least two plots:

1) The scientific sessions and the flashy pharma exhibits.

2) How a few PRD gave a voice to millions of PRD who might have once upon a time felt alone or crazy.

NOTE: The 1st video is the short report at the end of ACR 2010. I didn’t plan what to say, but after I turned off the camera, KB and I wept as we were overcome with knowing that history had changed. The second video is an interview with the Mayo Clinic about why patients would want to attend the ACR meeting.

24 thoughts on “Gatecrashing: The Story of Rheumatoid Patients at the ACR Meeting”