After the tofacitinib FDA hearing, the votes are in, false perceptions persist, and patients still need relief.

Some estimate that tofacitinib could be approved by the US FDA within a few months after mixed votes and mostly inaccurate press reports. It’s fitting this discussion takes place as rawarrior.com begins its fourth year of reporting the patient point of view Thursday. Many are hopeful for a new treatment and never was the patient perspective more essential! 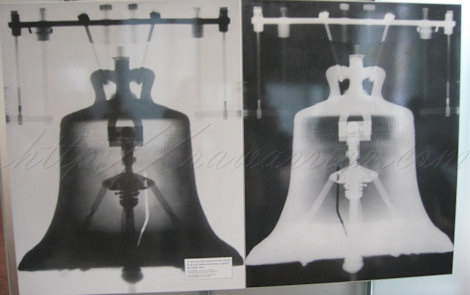 The PANEL: 4 distinct votes about approval of tofacitinib

The FDA Arthritis Advisory Committee (AAC) actually took four votes on tofacitinib at the end of the meeting May 9th. They voted 2-8 on the first question, finding that Pfizer has not sufficiently demonstrated that tofacitinib stops radiographic damage. Pfizer hopes forthcoming clinical trial results will address this concern, according to one source. The second vote was unanimously in favor of Pfizer, that the clinical trial data provide substantial evidence of the efficacy of tofacitinib for the treatment of moderately to severely active Rheumatoid Arthritis. Another vote, with regard to the JAK’s safety profile, was split: 7, yes; 2, no; 1, abstain. Finally, 8 of 10 recommended approval for use after failure of one or more DMARDs.

One of the two dissenting voters, Dr. Sharon Gabriel of Mayo Clinic, explained that she would support the application if the language were more restrictive so that an RA patient might not move directly from failing a weaker DMARD such as Plaquenil directly to the new JAK inhibitor. With the long track record of methotrexate, Gabriel’s point is valid. The wording will likely be modified so that patients will have to try more than one disease modifying drug before getting access to tofacitinib.

Although Pfizer’s tofacitinib application will likely be approved, it may not be approved as a first-line DMARD yet, but either a second or third-line drug. When approved, Orencia and Actemra were used similarly; patients had to have insufficient relief from DMARDs and TNF inhibitors.

The PRESS misses the mark because they have no idea

We watched a variety of TV reports Wednesday evening to see how the tofacitinib hearing was handled. We’ve also read a few news articles over the last few days. Clearly, most of the press know as little about Rheumatoid disease as the rest of the public knows; they remain confused about what the disease is or how badly new treatments are needed. None were completely accurate; some are funny even if they’re sad.

Pretty good: Medpage Today has a good article about various points considered by the AAC as they debated and voted on the NDA for tofacitinib.

The bad: The Wall Street Journal gave the following as their entire explanation of RA: “Rheumatoid arthritis is a chronic inflammatory disorder that usually affects small joints in the hands and feet.” Wouldn’t it be nice if Jennifer Dooren were correct, but alas, she’s not. One wonders whether she did her research by reading Woman’s Day magazine.

The ugly: An article on EmaxHealth takes the cake. “Although individuals suffering from rheumatoid uterus (serious proofreading error – yikes!) are anxious to try a new medication, which might provide them with relief, they might be trading the possible improvement of their arthritis with another, possibly serious problem… Arthritis sufferers who have not tried aspirin should discuss its use with a healthcare professional, ideally a rheumatologist.”

Does anyone believe the press would recommend aspirin (or Tylenol) as a treatment for Lupus, MS, or Lymphoma? This happens to RA patients because the disease is misnamed Rheumatoid Arthritis. We know that RA is not a type of arthritis, but that arthritis is only one symptom of a serious disease that can affect vital organs; but these reporters apparently do not.

The PATIENTS, the principal stakeholder, have no vote, no press agent

Patients are the reason for the decade plus of research leading to tofacitinib. Patients are the biggest stakeholder in this decision and the only ones with a full appreciation of what the disease entails. We are not “anxious to try a new medication;” rather, we deserve effective treatments that will stop disability and premature death as much as victims of any other diseases do.

Postblog: Victim is a word seldom if ever used on this blog; however, it seemed to fit this context best.

EDIT 5/15/12 2pm ET: After several negative comments on his site, prompted no doubt by this posting, the author of the emaxhealth article has edited his page so that it no longer reads “rheumatoid uterus.” However, the obgyn doc stands by his erroneous statements about RA treatment. Unfortunately, our community’s attention to their site is likely benefitting them financially. Below is a screenshot from Google, showing the rheumatoid uterus quote.

I hope the inadequate way the Wall Street Journal defined RA will not be lost in this discussion. This is far more grievous given the trust readers have in their publication and the size of their readership. 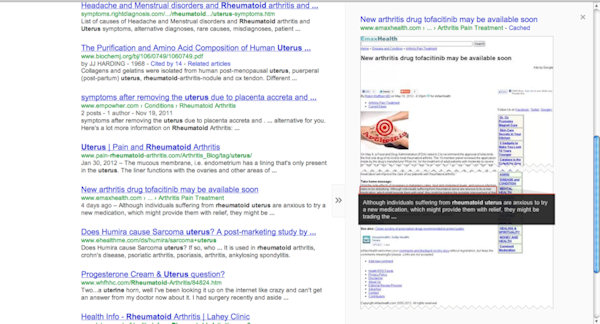 44 thoughts on “Aftermath of the FDA Vote on Pfizer’s RA JAK Inhibitor, Tofacitinib”