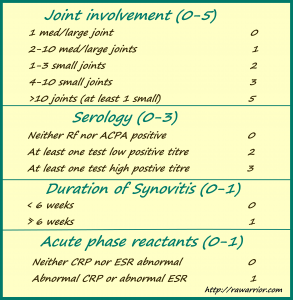 An early Christmas present from the ACR?

The American College of Rheumatology (ACR) announced this week new criteria for diagnosis of Rheumatoid Arthritis. Yesterday, we discussed some of the possible impetus for the change. Today, we’ll look more specifically at the changes.

We need to know

What is different about the new criteria? Will it be any easier to diagnose RA? Will RA patients be diagnosed and treated any earlier?

How does the new model work?

The new model is a point system similar to that used for diagnosis of other diseases such as Psoriatic Arthritis. Here is an example on MedicalCriteria.com near the bottom of the page. Points are accrued in each of 4 categories. In this case, a score of 6 constitutes a diagnosis of Rheumatoid Arthritis.

Blackjack: how can you get a score of 6?

If you like to play card games, you are probably already thinking: what is the easiest road to 6? When would you have hit six? Was it early in the progression of your RA?

As Andrew pointed out yesterday on the Facebook page, there are lots of patients who are seronegative who would have a very hard time getting a six. They would have to have more than 10 joints involved and some swelling (synovitis) before being treated. (Coming soon: We need to examine how the points are added and how the terms are defined. But, Andrew’s point is valid.)

The Journal of Rheumatology reports that 35-45% of all Rheumatoid Arthritis patients will have “normal” blood test results throughout the course of their disease. That includes ESR, CRP, and Rf. All of the three will remain negative for as many as 28% of people with RA.

Adding the anti-CCP test (ACPA on this chart) to the criteria is something which I have demanded for months. It is as important and valid as the Rheumatoid factor (Rf). So, it is significant that the ACR is willing to place anti-CCP on equal footing with the Rf. However, with this scoring method, it may not help many in this large group of Rheumatoid Arthritis patients who are seronegative for this reason: patients with a negative Rf are more likely to also have a negative anti-CCP.

Two things are absent from the new criteria. Gone is the emphasis on hands and wrists. It is replaced with an emphasis on “small joints,” which I surmise elevates our feet. (Pun intended; we need it.) Gone from the list are erosions and rheumatoid nodules, both of which are usually seen as evidence of long term disease. The ACR are hoping to diagnose before those appear.

What about your RA?

What’s your score today? And what would it have been early in your disease progression? Would you have been diagnosed differently?

Is there way to improve the improved guidelines? How could we increase early diagnosis without increasing false positive diagnoses? Let’s look at that next time: American College of Rheumatology Redefines Rheumatoid Arthritis, Part 3