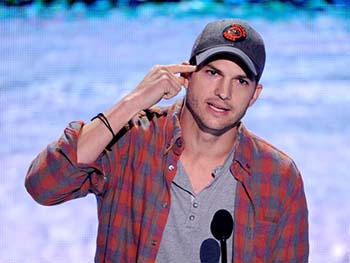 I watched the video of Ashton Kutcher’s short speech last night during dinner. A couple of hours earlier, in the ophthalmologist’s waiting room, Katie Beth showed me an article her boyfriend sent her on her phone. It used the RPF as an example of an organization that recognized the importance of changing language to portray a true message – that Rheumatoid Disease is not a type of arthritis, but a systemic inflammatory disease that can have destructive affects on any part of the body. The whole article is on Cracked.com – click here (profanity warning).

1) Opportunity: “I believe that opportunity looks a lot like hard work. When I was 13 I had my first job with my dad carrying shingles up to the roof. And then I got a job washing dishes at a restaurant. And then I got a job in a grocery story deli, and then I got a job in a factory sweeping cheerio dust off the ground. And I’ve never had a job in my life that I was better than. I was always just lucky to have a job, and every job I had was a stepping stone to my next job, and I never quit my job until I had my next job. And so opportunities look a lot like work.”

2) Being sexy: “The sexiest thing in the entire world is being really smart. And being thoughtful. And being generous. Everything else is crap. I promise you. It’s just crap that people try to sell to you to make you feel like less. So don’t buy it. Be smart, Be thoughtful. And be generous“

3) Living life:  “Steve jobs said that when you grow up, you tend to get told that the world is the way that it is and your life is to live your life inside the world and try not to get in too much trouble, maybe get an education, get a job and make some money and have a family; but life can be a lot broader than that when you realize one simple thing – and that is that everything around us that we call ‘life’ was made up by people no smarter than you. And you can build your own thing; you can build your own life that other people can live in. So build a life. Don’t live one; build one.”

It’s a universal truth, but Steve and Ashton said it well. Each one of us does matter and can make a difference. We change the world by living in it. We impact others – and the future – for good or bad. If we see something that is wrong, we can say something or do something about it. We don’t have to just live life inside the world and try not to make too much trouble.

We don’t have to sit down and shut up just because others decided long before we were born that saying “rheumatoid arthritis” benefitted their goals. And I don’t feel like it’s my job to convince someone to change. We can build our own thing as Kutcher says. That’s exactly how I see the work of the RPF. It’s the first patient foundation for Rheumatoid Disease, building something new that other people can live in.

5 thoughts on “Ashton Kutcher on Opportunity, Being Sexy, & Steve Jobs’ Advice on Life”