My brief story about ciprofloxacin and Rheumatoid Arthritis 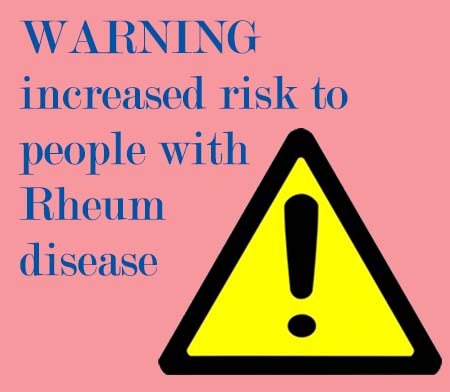 I got a kidney infection shortly after starting Enbrel. It was Good Friday 2009. My kidney hurt and fever spiked to 104.5, after 3 days of UTI. Before then, I’d only had a minor UTI  with pregnancy. This is when my GP got the nickname “Good GP” because of responding quickly with an antibiotic. In two days, the infection symptoms were gone, but something was wrong with my Achilles tendons: they were inflamed and too painful to walk on. Living with Rheumatoid, I’m used to walking through lots of pain, but I knew something was wrong. When the sensation didn’t subside, I called a few pharmacists, describing my situation. There was a consensus to stop the ciprofloxacin, and I did. The tendons recovered. Monday, I called the rheumatologist (Dr. Dolittle) who had prescribed the Enbrel. I’d seen him only once, after 3 years of Dr. KBC. I called to find out whether to take the Enbrel and whether he thought I needed another antibiotic. He told me: “That’s not a real side effect.” I could tell he didn’t believe me, and I shouldn’t have, but I went back there one more time.

Others’ stories about fluoroquinolones and Rheumatoid Arthritis

A few patients have sent me emails about the dangers of ciprofloxacin and other medicines in the fluoroquinolone class, asking me to discuss the issue. One patient I know believes Levaquin, a fluoroquinolone, triggered her Rheumatoid Arthritis diagnosis. I tend to believe patient stories, since my kids and I have been disbelieved so many times and turned out to be right (examples in an article I wrote for e-patients.net a few years ago). But I’m also a healthy skeptic and lover of evidence. First, let’s look at some medical literature, then an astonishing conversation between a doctor and dozens of patients.

Cipro, made by Bayer (generic name ciprofloxacin), is the most commonly prescribed fluoroquinolone antibiotic. The National Institutes of Health website has an article that’s written in a friendly question and answer format: “The Risk of Fluoroquinolone-induced Tendinopathy and Tendon Rupture What Does The Clinician Need To Know?” There are 48 footnotes of previous studies, dating back to 1979, declaring, “Risk factors associated with FQ-induced tendon disorders include age greater than 60 years, corticosteroid therapy, renal failure, diabetes mellitus, and a history of musculoskeletal disorders.”

“(I)t is possible that FQs have a direct cytotoxic effect on enzymes found in mammalian musculoskeletal tissue… In-vitro studies in cultured tendon cells have confirmed the clinical observation that FQs can increase the risk of tendon rupture.”

What happens if FQ damages tendons?

“Because rupture can occur even late in the course of treatment or after discontinuation of FQ use, patients receiving a FQ should be counseled to seek medical attention immediately if symptoms, such as redness, pain, swelling, and stiffness, develop. Tendinosis usually recovers over a time course of weeks, usually within two months, after cessation of FQ therapy. Early diagnosis based on recognition of symptoms suggestive of tendinopathy, followed by FQ discontinuation and supportive treatment, may prevent tendon rupture and tendinitis.”

The FDA.gov page places less emphasis on musculoskeletal risk, but does say to tell your doctor if “Have rheumatoid arthritis (RA) or other history of joint problems,” or take anti-inflammatories, or take steroids, or take methotrexate, or take omeprazole or a list of other drugs. There are further warnings, but these commonly pertain to people with Rheumatoid disease.

The “IMPORTANT WARNING” describes an increased risk of tendonitis and tendon rupture and lists specific populations at greater risk: “Tell your doctor if you have or have ever had a kidney, heart, or lung transplant; kidney disease; a joint or tendon disorder such as rheumatoid arthritis (a condition in which the body attacks its own joints, causing pain, swelling, and loss of function)...” Also, “Tell your doctor and pharmacist if you are taking oral or injectable steroids.”

I was about finished with this post last week when I saw a doctor’s conversion worth showing you:

Side effects have often been a point of doubt, so that patients are not always warned in case they might imagine or exaggerate. Obviously, I think people who become patients can be trusted with as much information as they feel comfortable with. On this blog, I’ve always been cautious in mentioning adverse events so that I don’t frighten others (while Enbrel gave me hives and Orencia severe bronchitis, many have taken them safely). Reporting any side effects to your doctor is important, and doctors should take it seriously. The case of Cipro / FQ’s shows sometimes doctors are unaware of serious possible side effects.

In 2008, a doctor complained on his blog that the FDA had “caved” to consumer groups to add the boxed warning about tendon rupture to Cipro. He said a small number of people had been affected and the warning was unwarranted. About 150 comments followed, including much published data and testimonials, several from medical professionals who had become victims of adverse events. Eventually, the doc posted: “Based on your posts and post by others experiencing severe consequences from fluoroquinolones, it appears there may be more to the story.” After more comments, a year later he said, “Based on the responses to this post, there may be more to the Cipro issue than the FDA is letting us know. However, withot data, it is impossible to make a decision for a patient…. However, we also need to accept that there are some pills that may help millions of people but hurt a few in the process.”

I’m glad he changed his mind, but doctors and patients both need to be informed. Usually, the patient will know best his/her complicated health profile with a chronic disease. Since my Cipro – Achilles tendon incident a few years ago, Dr. GP and I make medication decisions together. In my electronic chart, doc has a list of which meds I shouldn’t take; we look at that and doc asks, “Can you take _____ for _____?” out loud and looks it up online to check for warnings. A Medline search can be done in seconds.

After four years of comments on his blog, the doctor who had complained about the FDA warning wrote, “Truly sorry for your suffering and the effects you may have suffered from Cipro. Sadly, despite the now known dangers caused by Cipro, how these medications lead to these damages is unclear.” He repeatedly stated that all drugs have risks, and as I kept reading, I kept thinking that was not the main issue. A commenter said it perfectly: “I hope you learned something from the discussion on the fluoroquinolones. Doctors need to become much better educated about medications and stop being so dismissive of patient complaints about their experiences on prescription drugs.”

Apparently there are books, support groups, and citizen protests opposing this class of antibiotics. The PBS NewsHour even did a segment about quinolone antibiotics. There may be some hype in some of the campaigns, but it is clear that after a surprising number of adverse events, the FDA increased the warnings, and people with Rheumatoid Disease are identified as having greater risk.