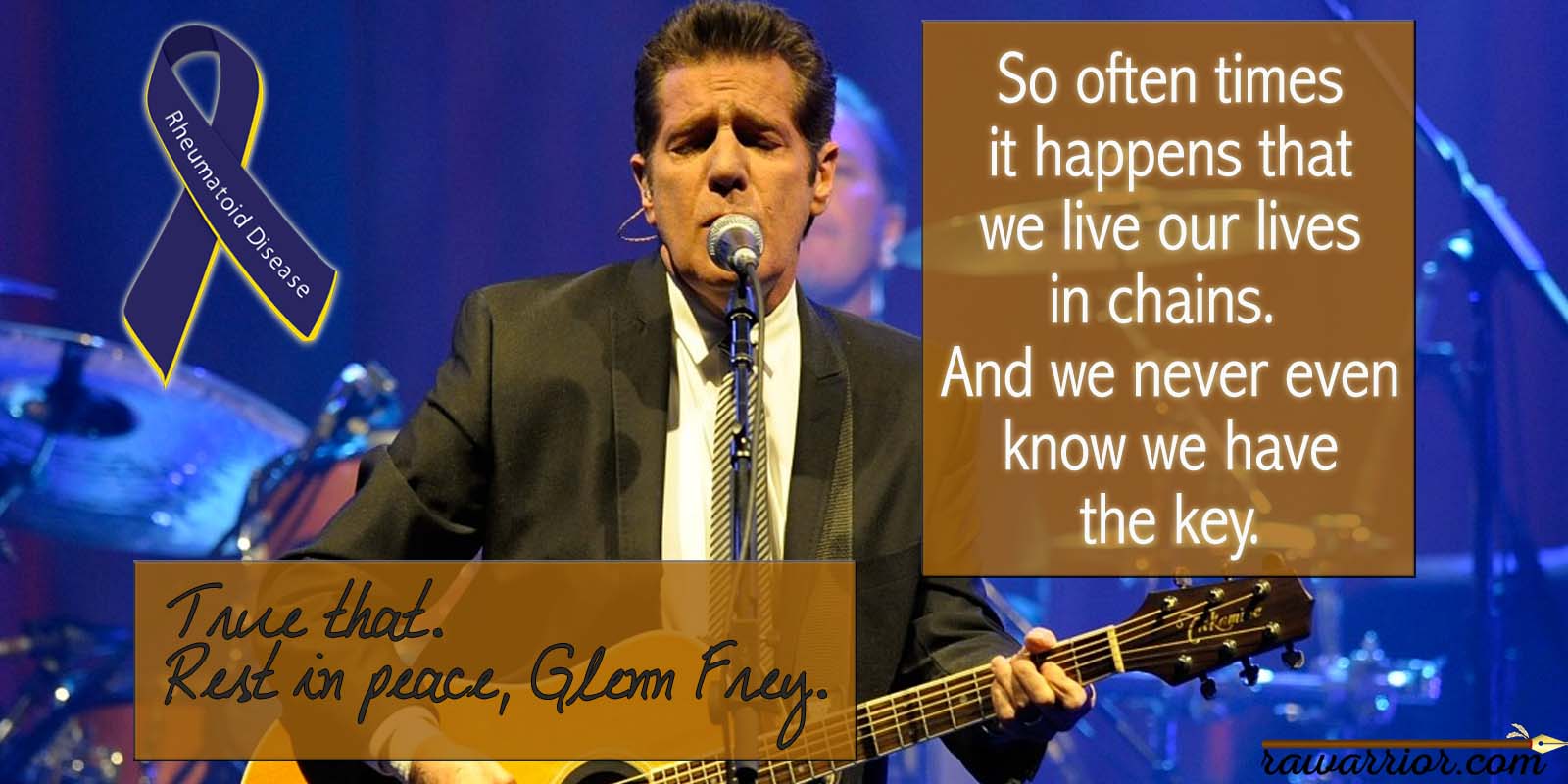 Rheumatoid disease is not for the faint of heart. Just as 3 heartrending comments reminded me what a struggle it can be to keep fighting, RA Warriors began to grapple the shocking news of Glenn Frey’s cause of death. The Eagles’ website: “Glenn fought a courageous battle for the past several weeks but, sadly, succumbed to complications from rheumatoid arthritis, acute ulcerative colitis and pneumonia.”

What should we make of Glenn Frey’s cause of death? 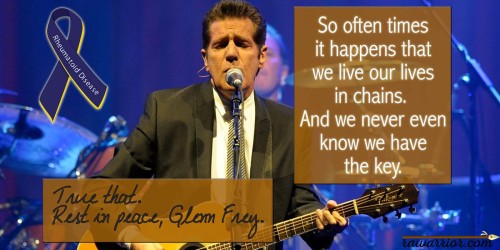 The passing of Glenn Frey and his family’s revelation that his death was in part due to the rheumatoid arthritis he struggled with for many years hit the #rheum community hard. When I shared the news on Facebook, people expressed surprise that Glenn’s diagnosis was hidden from his fans, and that the press minimized the disease even though it was listed in his cause of death.

Rheumatoid Arthritis is just a little something that causes swelling in the hands and feet… Now where have we heard that before? Try here. Or check out RAW’s Rheumatoid Disease Hall of Shame.

So the shock of Glenn’s death combined with amazement that it was in part due to the same diagnosis many of us or our loved ones share was intensified by the media’s usual insistence that this disease is really nothing to worry about. Some Eagles’ fans living with RD wondered aloud if maybe Glenn Frey’s cause of death could help awareness of RD. I remembered what I’ve written so many times: People will understand if we make them listen. No one will do it for us. We’ll have to join together and be our own celebrities and make this disease famous instead.

Blame the RD or the medicines? 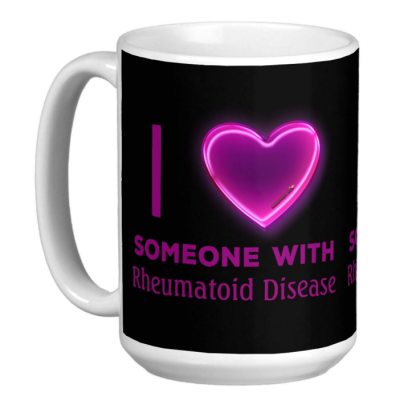 People wonder what exactly to blame as Glenn Frey’s cause of death. Were the comorbidities caused by the RD or by the RD medicines? We may never know the details. Some say it shows we shouldn’t even take these medicines since they may have played a role. Either way, comorbidities in RD raise the death risk as a recent study confirmed, finding circulatory disorders, like stroke and myocardial infarction, increased mortality risk among PRD by 60%. Medpage Today summarized the issue: “Patients with RA have a well recognized increased mortality compared with the general population relating to their underlying disease, but the influence of comorbidities is less clear.”

As a Christian, I believe death is our enemy. Some things are out of our control, but I’ve always urged warriors to fight for life – your best life, as much as you can get. Part of that is being informed, making choices, doing what seems best. That’s doubtless what Glenn and his doctors did.

Meaning in Glenn Frey’s cause of death?

The Eagles’ music has meant so much to me. Every song seems to help me make sense of life when it doesn’t make sense. Roo can tell you how passionately I sing Eagles’ songs driving my truck. I’ll cry with Hotel California because “you can check out but you can never leave,” feel validated with Desperado, then soar high with Take it to the Limit, or smile with Already Gone. There’s so many!

As for many of you I’m sure, music like the Eagles’ can help me keep fighting when I don’t think I can do it any more – those times when you really don’t think you can face one more day of severe pain, full shoulders of responsibility, meds that don’t help, and people who won’t get it.

We had a few warriors in that situation this week. Three were men. That’s unusual because RD is rarer in men; men are less likely to admit they’ve hit bottom with an illness; and men are even less likely to share on social media. So how many men do these three represent? And how many women feel the same way?

~ V. posted twice on my Facebook Page that he is tempted to take his own life because he can’t take it any more. We’ve seen more than one suicide due to RD.

~ Then there’s J. who commented on a blog post that he’s “seriously close” to the end of his rope.

I remember crying the first time I thought about RA hearing Hotel California “you can never leave.” My hand was swollen up like a balloon. I’d just left a large research meeting where no one seemed to grasp the plight of people with rheumatoid disease (PRD). I went home and wrote about ivory towers: how can they ever understand? Now, I wonder how we could ever show the world that RD is more than just a little swelling in the hands and feet when a beloved musician dies from RD-related complications, and it’s still shrugged off?

For today I have two answers.
1) Do what I can together with you through the Rheumatoid Patient Foundation.
2) Of course, I am going to go home and play Eagles CDs again tonight.

What can WE do NOW for awareness of the REAL rheumatoid disease?

1. MARK YOUR CALENDAR for Rheumatoid Awareness Day Feb 2! Read here about what folks have done to celebrate in past years.

2. Or get a new t-shirt or mug to spread awareness. Lots of new hearts just in time for Valentine’s Day! This link takes you to the new heart goodies. To check out the rest of the store, click on my picture. If you want to see everything, click RA Warrior Wear, and then Products.

40 thoughts on “Glenn Frey’s Cause of Death”