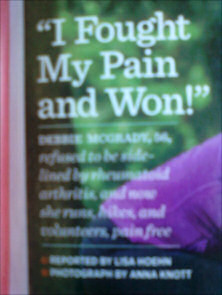 My daughter Mary Khris texted me from a tennis tournament a couple weeks ago. She said, “Momma, this is worse than Woman’s Day.” She texted me this image and read aloud to me the article which had upset her. She ended, “It sounds like it was her mom’s fault. RA is not anyone’s fault.”

It was an article about RA called “I Fought My Pain and Won!” in Prevention magazine which she received as a result of her tennis scholarship. The story was about Debbie McGrady who claims to have put her Rheumatoid Arthritis in remission with diet and exercise.

I’m so grateful that my daughter tries to understand and does not blame me for this unrelenting RA. She calls me a fighter: “You always give your all and you never give up. Your hard work and positive attitude have been a continuing inspiration to me.”

My responses to Debbie’s claims

Of course I don’t mind if Debbie’s RA is in remission. Or if she believes whatever she wants to about that. But only five or six percent of people with RA get remission. And someone needs to write about what the rest of us experience.

“When my knee swelled in my late thirties, I dismissed it. At forty-four, I developed foot problems, and deep down I knew why. My doctor confirmed: I had one of the most aggressive cases of RA he’d seen. Left untreated, I’d be in a wheelchair in eight months.   Through the tears, all I saw was my mom losing the life she had loved. When my eyes dried, I grew determined to keep from suffering her sad fate.”

My knees have hurt for five years and been so swollen for the last month that I can’t straighten them. Some days, I can barely walk. Is that because I cannot dismiss it?

In most people, RA gets to a point where it cannot be dismissed. They can no longer do things they want to do. Most move past that point when their flares pause. Or a treatment helps them. Some are not that lucky and stay at that initial crisis status, never having a good day.

“With RA and your joints, it’s use ’em or lose ’em. So boy, I use ’em. Though I’d always been active, I stepped it up. I work out five days a week—thirty minutes of cardio and lifting light weights.”

Every article I read about joint protection says to rest joints that are in flare. Exercise is safe with joints which aren’t affected by RA or if a person is not experiencing a flare.

“My favorite snack was potato chips; now it’s apples—my husband jokes that I’m going to overdose! I buy only organic fruits and vegetables and hormone-free meat.”

My friend Jay says a vegetarian diet cures RA. But he knows it takes 36 years to do it. He knows because he has followed it for 35 years already.

“…my RA is in remission. Though I take the new prescription meds, I’ve met others on the same drugs who still suffer. I know it’s my attitude and lifestyle that let me live pain free.”

How does she know that is the difference between her and them (me)? Only 20% of people in clinical trials (best case scenario) improve up to 70%. Even when that happens, the improvement can be temporary since the treatment often stops working. Is that the patients’ fault?

82 thoughts on “I Fight My Pain and Blog”