Does livedo reticularis have anything to do with Rheumatoid disease? 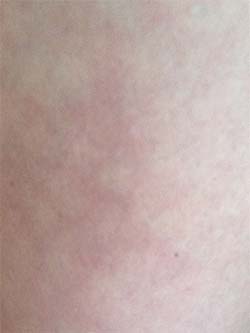 Livedo reticularis is a purplish-colored lace pattern under the skin. There is no raised or itchy rash on the surface of the skin, but the light and dark areas resemble a net-like pattern. The causes and treatments for livedo reticularis are not fully understood, however it is believed that when some small blood vessels are blocked or no longer feed surface tissues, other vessels enlarge to compensate, creating the netted pattern. (See explanations for livedo reticularis on DermNet.)

Although some sources do not assert any connection to Rheumatoid Arthritis, others do including Wikipedia, listing vasculitis due to Rheumatoid Arthritis and GP Notebook, again listing RA and SLE as possible causes. A Mayo Clinic article lists Lupus as a possible cause, but not Rheumatoid disease. Part of the confusion is this same term is used to refer to a harmless pattern on the skin that is common in cold weather and a more lasting symptom related to vasculitis or other more serious conditions. The condition can also be caused as a side effect of some medications such as amantadine (for Parkinson’s disease) or interferon (for melanoma).

For well over a year, I’ve had this vascular rash across the front of my left leg. I asked Dr. GP about it last summer, but it didn’t look very severe that day and I’d already asked a few questions… so nothing was done. Eventually, I asked Dr. Tylenol (a rheumatologist) about it when we went back there last month. Doc looked puzzled, said “Hmm.” I politely insisted it be examined closely, but Dr. Tylenol still shrugged.

I was sure it was vascular because it’s below the surface of the skin. Over the past few years, I’ve had symptoms of vasculitis and my first rheumatologist had noted that in my chart. So I was determined to get some doctor to answer me – even Dr. Google.

Well if you Google “vascular rash” like I finally did and look at Images, you’ll see a thousand rashes, but nothing like my leg. Eventually, I figured out how to describe my leg leaving out the word rash. And I immediately found pictures of livedo reticularis caused by vasculitis related to Rheumatoid disease (or Lupus). Some of them look like my leg, many more severe.

Armed with that information and more pictures of my leg, we saw the GP again last week and doc decided to do a biopsy. The non-rash recently appeared on the other leg as well so I’ll be glad if I have an answer soon – maybe. I asked the GP who treats vasculitis if that’s what this is and the answer was “the rheumatologist.”

Have you had a rash or non-rash like the one in the picture?

What did your doctors say about it?

86 thoughts on “Livedo Reticularis & Rheumatoid Arthritis: Nothing Rash about It”