Click here to view a complete listing of Rheumatoid Arthritis stories on this site with disclaimer.

This is Jay’s Rheumatoid Arthritis story, in his own words. 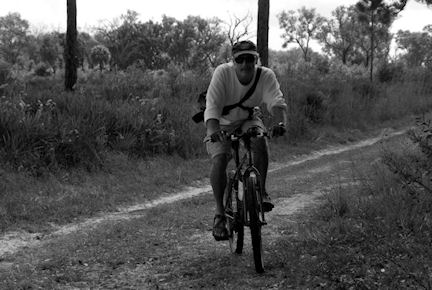 My onset of Rheumatoid Arthritis was completely overnight.  On a Friday in spring 2006, I told my favorite bartender (my FB friend Kristi) that Roxanne and I were leaving Florida that weekend for a camping trip in the North Carolina Mountains but I wasn’t feeling good and hoped I wasn’t getting sick. My right wrist was sore, too, but I thought I might have sprained it a bit jumping a curb on my bike. We started the 12 hour drive and one side of my throat started getting sore too. About the time we stopped for the night in a motel, my sprained right wrist had moved to my left wrist and the sore throat changed sides too.

We got to the campground early the next day and I got the tent up okay, but could tell something was way wrong. During the night, I became wracked with pain in every joint and stumbled out once thinking I would even throw up because of pain. I turned around and then couldn’t find the tent, but finally did which was good because it was nearly freezing.

In the morning, after the awful night we drove to the Emergency Room in Brevard and I got shot up with enough things to survive a few days there yet before driving back to Florida. The ER doc asked about family history and I said my mom had lupus and he said, “Oh really”. He was real close. I suspected then that I had lupus but so far I’m negative for lupus; I only have Rheumatoid Arthritis.

I got in to see a rheumatologist and it took two blood samples for me to test positive for Rheumatoid factor.  We were hoping it was viral and temporary.  My great rheumy called me at home on a Friday night to tell me the results and he said “it’s a good thing really” because I was really in complete misery and now I could get treatment.

However, now life is different. I have gone through three biologics and am on disability and I had the greatest job in the world as a marine biologist. They let me keep an office and I’m still a volunteer. I seem to have been clobbered more quickly than other people I’ve read about.  It would be nice if it disappeared as quickly, but I’m not expecting that.

This is Sue’s Rheumatoid Arthritis story, in her own words. 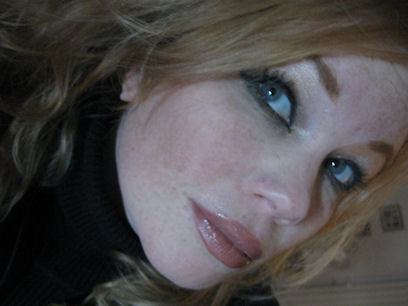 Last fall, I noticed pain in my hands while driving. It wasn’t the typical achy pain I’ve grown used to with the fibromyalgia, it felt inflamed. I attributed it to writing my senior thesis (30 pages of research) and the additional assignments that a writing intensive campus heaps upon its students.

Hell, I thought-it’s gotta be carpal tunnel. I HAVE been using my hands/wrists a lot, tapping away at the computer keyboard. When it didn’t subside with bracing, alternating heat and cold, and the requisite NSAID treatments, I called the doctor’s office.

They scheduled me for an afterhours visit. Brendan and I sat in the exam room, feigning huge injuries ala Family Guy and waited for the doc on call, who is also my osteopath. Good, I thought, this is up his alley. He’ll examine my wrists, pronounce it an injury of overuse and lecture me about the issue of excess weight and joint health.

That’s not what happened. He looked puzzled, said “I don’t know what it is.” Tests were ordered, a Lyme titer, sedimentation rate, rheumatoid factor. The office called a day or 2 later and gave me the preliminary results: the rheumatoid factor was elevated, indicative that I had ‘inflammatory arthritis. Part of me was ecstatic – the tests showed I wasn’t out of my mind. The other part of me knew this wasn’t something that was going away; there are at least 100 types of arthritis and this one was serious.

Fast forward to my being referred to the rheumatologist: more tests and a physical exam.”Squeeze my fingers”, they say. I do this.”Hard as you can; it won’t hurt me.” I reply, “Yes, but it WILL hurt me.”

The blood tests reveal I have Rheumatoid Arthritis and a vitamin D deficiency; who doesn’t in northern New England?

My mind reels.”You’re so YOUNG”, the doctor says sympathetically. I nod. This disease affects women more often than men, with an average age of onset between 30 and 50. I’m 37. Part of me wonders what awful thing I am repenting for, to be hit with this, with my mother being seriously ill herself – I don’t want to burden her. I try to be cheerful.

The fatigue is overwhelming. I end up taking incompletes for 3 classes. Between the pain and fatigue many simple things are literally beyond my grasp. The gas cap proves to be too much one morning, and finally admitting defeat I drive to a full serve station.

I see the worry in my children’s’ eyes and assure them that it will not kill me. I am sure that I don’t appear sick, but no one sees the swirling maelstrom beneath my skin, the storm of inflammatory cells in my synovial fluid. My ultrasound makes a lovely picture. All colors of the rainbow are represented, a tsunami of cytokines.

People offer me “solutions”; just take this vitamin/juice/powder and you’ll feel like a million bucks! They tell me it has cured their cancer, shrunken brain tumors… Okay, that is my exaggeration – I’m too tired to tell them to bugger off. I graciously decline.

It sounds so terribly emotional, but no one understands this illness unless they live it. The disease becomes a jealous mistress, stealing time, thoughts, actions, joy. It wants you all to itself. I worry about income, bills, school. I have no passion for my classes anymore; learning has become one more chore. There is guilt for being underemployed. I feel selfish for devoting so much time and energy to just functioning; I used to take care of everyone first. I allow some time to feel sorry for myself, and then I force myself to snap out of it. Too much to do, and I’m stubborn. I make dietary changes. I start doing yoga again. I add supplements to my daily cocktail of medications: omega 3’s, glucosamine / chondroitin / hyaluronic acid, flax seed, vitamin D3. I give up diet soda for tea. I decide that I need spiritual healing as well, so I decide the UU church will help to nourish the spirit. I’m not so averse to saying ‘I need help’.

I’m looking forward to when the right balance of medications gives me better quality of life, and I will not lie down and be miserable.

Putting this out there is scary for me; I’m admitting vulnerability. Maybe, though, someone will read this and find that they are not alone. Blessed Be.

This is Carol’s Rheumatoid Arthritis story, in her own words.

About seven years ago I had relocated from New Orleans to Atlanta and ended up with a second choice house that needed work while still putting in 10 hours a day. I was painting a bedroom one weekend. Even though it was really cold outside, we had the windows open for ventilation. I kept getting colder so I took a break and went downstairs to warm up. My husband put his hand on my head and insisted I take my temp – 102F. I went to bed thinking it was a virus and I’ll be okay in a few days.

Three days later my fever was spiking to 105F. Had just gotten new insurance and had a new doctor that I’d never seen. She talked to my husband and had him bring me in immediately. They put me in a back room on antibiotics and IVs. My temperature came down somewhat but in two days I was back in 105 range and heading to the emergency department. They did lots of tests but no diagnosis – just more IVs to get fluid in me.

The fevers finally stopped and I was exhausted but okay. I went back to work just in time to put in really long hours working on budgets. By the end of a meeting, the only way I could get out of a chair was to pull myself up and then try to straighten up. My elbows looked like large red grapefruits. By the end of the day, I could only raise my arm up to shoulder level by using the other arm.

So I went back to my primary care doctor. She asked what I thought it might be. Given the symptoms I was guessing Rheumatoid Arthritis, but with the weird viruses that could have been bacteria, I also thought it might be a reoccurrence of rheumatic fever.

Lab tests came back with one of the highest Rheumatoid Factor levels she’d ever seen, so it was off to a rheumatologist. He belonged to the baby steps theory of treatment. So, I spent a year not really getting any relief and was rescued when he accepted a teaching position in another state.

Onto the next rheumatologist who was great and was in a multi-specialty practice –sort of a one stop shop. So, I changed to one of their internists plus my rheumy. He bumped me up on the methotrexate, added prednisone and hydrochloride.

Then my company transferred me to Dallas. I did some research and found one of the top groups in the state. Dr. K looked through my records listened to my story and said you’re being treated to conservatively. Within 6 weeks, I was on Remicade. Her group knows how to work the insurance side. I’m up to 6 vials of Remicade every 6 weeks and may up it to every 5 weeks. I have been able to back down to methotrexate weekly, but just 6 pills now. No more Plaquenil. Still, I have to get some prednisone in various forms about every month (dose pack, IV bolus or single joint injection). NSAIDs aren’t possible due to stomach issues, but I have pain meds for when it gets bad. Still I know I am lucky. My husband takes things at my pace and looks for ways to adapt stuff for me. You should see my adaptive fishing gear! I may move like a 90 year old trapped in a 53 year old body, but I’m moving.

This is Janice’s Rheumatoid Arthritis story, in her own words.

It was three years ago and I went to the doctor because my toes all felt broken. I had no trauma, nothing…. It felt as if they were crushed.

Also, I had a bad knee.  I was also experiencing pain at the base of my fingers.

After some blood tests, I was diagnosed with Rheumatoid Arthritis. So I started Methotrexate and my liver went toxic. It is fine now though.

Since then, it was a bevy of medication with allergic reactions to all of them.

So, I am still looking for a med that will work for me. Right now, I am taking: Flaxseed oil, Omega3, and D3 vitamins and liquid Chondroitin and Glucosamine with MSM. I use Vicodin for the pain when I really need it.

I am still working over 40 hours per week with no end in sight, since I am my only income for my household.