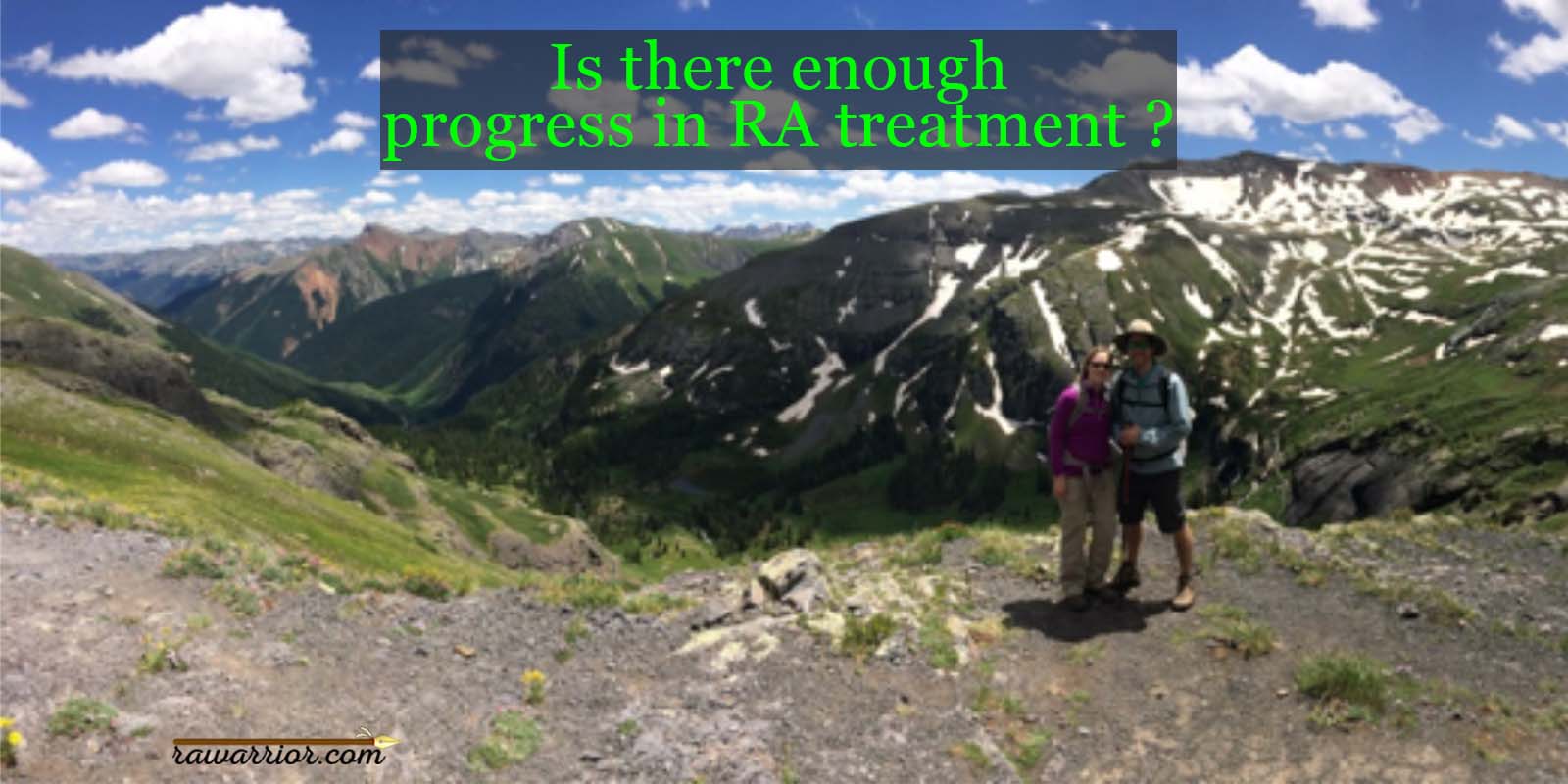 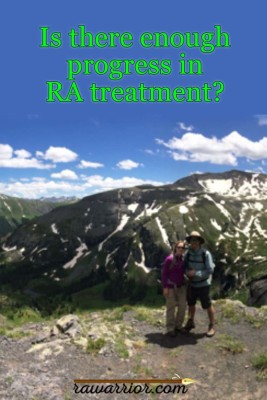 In this provocative guest post, RA Warrior welcomes Dana Symons, who asks whether we’ve reached A Plateau in RA Treatment Progress. If you’re like me, you’ll wonder why other news outlets haven’t asked these questions. But first, Dana is the talent behind many RD awareness graphics provided by the Rheumatoid Patient Foundation (RPF) and the current vice president of the non-profit. Dana has attended the American College of Rheumatology annual scientific meeting five times to help represent patients via RPF. Today, she brings you the unique perspective of a patient with a front row view of rheumatology research and clinical practice.

This is the view you miss when you don’t push yourself to the peak!

How did we reach a plateau in RA treatment progress?

Over the past couple of years at ACR, I seemed to notice a trend. There are tons of scientific sessions discussing a multitude of topics that affect those practicing in the field of rheumatology. However, it seemed that there were fewer talks being given specifically on rheumatoid arthritis. Perhaps that’s just my perception and I’m wrong—I did not make any attempt to categorize and count the sessions over multiple years!

Perhaps it’s because we had several years in a row with big news—new drugs coming to market, new biomarkers being discovered, new recommended guidelines from the ACR, including diagnostic criteria and Treat to Target initiatives—followed by years with less news. Sure, there are biosimilars and a few new drugs in the works, but nothing seems completely novel. There was certainly still a plethora of research; yet, the emphasis and enthusiasm for progress with this disease did not seem to be there. Perhaps everyone is just waiting for the “next big thing.” For whatever reason, to me there seems to be a sort of plateau. And plateaus are dangerous.

The dangers of a plateau

It’s the serious weight loss regime that can’t get you past the first five pounds. It’s the career progress that suddenly halts at a dead end job. It’s the relationship that blossoms, and then grows stale. And, speaking from experience, sometimes, it’s as far as getting 2/3 up the mountain you wanted to climb, past the miles of steep winding switchbacks—into the lower basin. While pretty, with its streams and waterfalls, and tempting with its flat path for easy walking—if you stop at this plateau and don’t keep going, you will never reach the pinnacle—you will stay on the plateau of complacency and never know that which is truly spectacular.

A plateau means you’ve made progress, but you haven’t reached the end.

There has been significant progress in treating RA / RD in the past decade or two. Biologic medications have been a game changer for many. New treatments targeting different pathways, new biomarkers indicating disease activity and helping diagnostic and prognostic efforts and a shift toward more patient-centric care are all very positive things. However, there remains a large portion of people with rheumatoid disease (PRD) that is unresponsive to any available treatment, and the mortality gap still exists. Just because we have made progress, it doesn’t mean it’s time to stop and call things “good enough.” Just because some patients are doing well who would not have been 20-30 years ago, doesn’t mean we ignore the patients who still are not doing well.

There is a pervasive sense that, on average PRD are doing well, and we can all put our feet up and relax a bit. The problem with that thinking is that there is no “average” patient. The statistical mean of a group of people may be helpful for exhibiting overarching trends, but is not helpful to an individual. It does not address the concerns of a single person, who may, in fact, not be doing well.

We still have a long ways to go in rheumatology, with yet a poor understanding of how the disease even develops, functions and evolves. Until we are able to understand this disease better, to screen and diagnose early, to universally recognize and treat the systemic nature of RD—we will never be close to being done. I say “we” because I mean all of us: patients, caregivers, doctors, nurses, researchers, pharmaceutical companies… we all play a role in advocating for better research funding and proper attention to this cruel disease.

Sometimes advertisements for RA treatments make it seem as if it’s a problem that’s already solved. Hearing from many thousands of patients, I knew that we still have a long way to go in RA treatment progress. But as I worked on my book, RA Unmasked, I learned how very true this is—especially in terms of systemic disease effects.

You can read more from Dana at her blog At the Water’s Edge or follow her on Twitter. A fun previous guest post from Dana: RA is Tricksy: Wandering by The Two Towers

BOGO! Amazon has the paperback of Rheumatoid Arthritis Unmasked on a holiday sale for $13.88 and the Kindle version is included free. You’ll have one to read and one to loan out to a doctor or family member.

DO YOU THINK PEOPLE HAVE BEEN HELPED ENOUGH BY CURRENT MEDICINES AND METHODS IN RHEUMATOLOGY? WHAT SHOULD BE DONE?

VIDEO from my first ACR meeting

8 thoughts on “A Plateau in RA Treatment Progress?”