Recently in Rheumatoid Arthritis Ultrasound News, we looked at reasons musculoskeletal ultrasound matters to people with Rheumatoid Disease (PRD), and stories from patients who weren’t treated because doctors didn’t see swelling or inflammation. We heard what a doctor said recently at EULAR: “You can see raging inflammation in joints that are not swollen or tender,” and reasons musculoskeletal ultrasound (MSUS) is not available to most PRD in the U.S.

In part 2, Musculoskeletal Ultrasound in Rheumatoid Arthritis: Training Is Essential, we saw even a trained ultrasound technologist confused by the latest in MSUS technology and techniques, and bad things that can happen when MSUS is in the hands of improperly trained doctors. We’ve seen ultrasound is proven superior to “clinical exams” in PRD in many ways, such as in detecting erosion and inflammation. However, proper training is critical to keep this valuable tool from becoming a weapon to refuse treatment the way other tools have, such as blood tests, and nuclear bone scans. 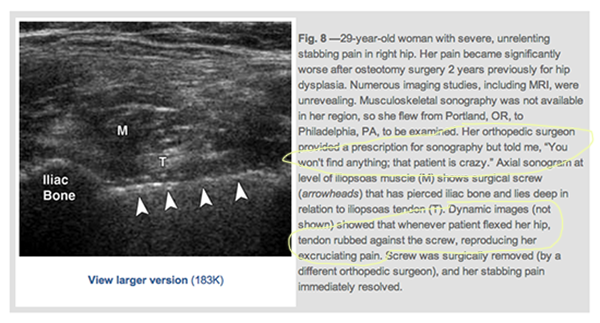 Some radiologists & rheumatologists are working to promote MSUS

“one interested party who seems to be lost in the shuffle: the patient”

The American Roentgen Ray Society, the oldest radiology organization in the U.S., published this five years ago: The Top 10 Reasons Musculoskeletal Sonography Is an Important Complementary or Alternative Technique to MRI.[1] It’s full of examples and images and not difficult to read. There are still few trained in MSUS, but it sounds like the ARRS recognizes its importance.

LOOK what the author, Nazarian, wrote:

“Although I certainly understand the difficulties that radiologists may face in implementing musculoskeletal sonography in their practices, there is one interested party who seems to be lost in the shuffle: the patient. If we accept the assumption that radiologists owe it to patients to provide state-of-the-art diagnostic imaging, then we are falling short of this goal when we fail to provide sonography. The fact is, many diagnoses are readily made using musculoskeletal sonography but are either difficult or impossible using MRI. In my practice I have seen countless patients who have suffered with their pain for weeks, months, or even years, undergoing nondiagnostic MRI or other imaging studies, only to have a 20-minute sonographic examination detect the problem and send the patient on the road to recovery.”

“You won’t find anything; that patient is crazy.” 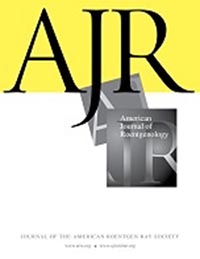 In one example, Nazarian tells us of a woman with hip pain: “Her orthopedic surgeon provided a prescription for sonography but told me, ‘You won’t find anything; that patient is crazy.’” In reality, a surgical screw had pierced the iliac bone and it pressed against a tendon when she moved. She wasn’t crazy or even wrong! Her doctors needed to trust her word, and pursue an answer. The screw was removed by a new surgeon.

To those of us with “invisible” symptoms, this should be music to the ears – clinicians who want to find answers instead of dismiss us with a syndrome-of-the-day!

In “Good” Patients and “Difficult” Patients — Rethinking Our Definitions, a moving story in the New England Journal of Medicine this week, by a doctor tells of saving her dad’s life one night in the hospital when the staff was oblivious to his internal bleeding. Ironically, the patient was a doctor too, but it doesn’t seem to matter much once you become a patient (as Elizabeth Cohen’s book demonstrated).

Asking patients & examining them exactly WHERE IT HURTS

Nazarian’s reason four includes an example of a rose thorn inside a patient’s finger, which MRI failed to show. Placing an ultrasound probe where it hurts showed a “foreign body consistent with rose thorn and proven at surgery.” Seeing that thorn reminded me of when Katie Beth was 2 years old. I took her to the doctor for a splinter in her foot. Nothing was obvious, so we were told that if anything were in her foot, “her body would take care of it.” Her foot continued to hurt, but our complaints fell on deaf ears at periodic pediatrician visits (in another state – not the wonderful ped we’ve had the last 8 years). Eventually, a new doctor recognized that there was a problem, and sent her for an x-ray. Then she had surgery to remove a piece of metal from her foot, and she stopped limping.

The steep learning curve is worth it!

In his conclusion, Nazarian admits that training for MSUS will be hard work, but insists it’s worth it (emphases added):

“Admittedly, difficulties exist in learning any new technique, especially one as operator-dependent as sonography. However, having been present at the birth of musculoskeletal MRI, I can attest that the learning curve at that time was also quite steep. I recall working as a resident with a renowned musculoskeletal radiologist while she was officially reviewing the first knee MRI ever performed at our institution. I was instructed to ‘read the MR image just like a radiograph.’ We have come a long way since then in our MRI interpretive skills, owing to more advanced training in MRI interpretation. The same process needs to occur for musculoskeletal sonography, with greater training in the performance and interpretation of musculoskeletal sonography in radiology residency and fellowship programs.”

Rheumatologists working to increase the use of MSUS in PRD

For the 2012 annual scientific meeting, the American College of Rheumatology published 58 abstracts on the subject of ultrasound. Another organization, the Targeted Ultrasound Initiative understands the value of MSUS and the need for training. Their steering committee includes some of the developers of MSUS techniques.

A summary of their mission:

Postblog: Does it matter who does MSUS for PRD? To obtain a diagnosis, probably not. But to get the best care possible, PRD need clinicians who are conscious of their ongoing disease activity. It’s ideal if MSUS is available each time a patient is seen. However, any access to MSUS would be an improvement for most PRD in the U.S. and they should seek care from whichever clinician is equipped to use it.

11 thoughts on “Professionals Call for Ultrasound Use in Rheumatoid Arthritis”