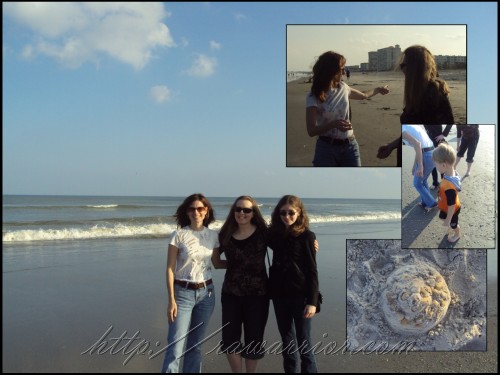 I went to see Jay’s blog reacting to the story. He’s received over 50 comments. Many of them are intelligent points about the diversity of Rheumatoid Arthritis as a disease or the unpredictability of remissions. If you want to smile, the one about toothpaste at the top of the third page is the funniest.

Many folks expressed anger and offense. It reminded me of the Woman’s Day Rheumatoid Arthritis article last summer. RA Warrior linked to the online version of their RA article. Woman’s Day received about 50 comments, skillfully rebutting their silly depiction of Rheumatoid Arthritis. Over the subsequent months, I made numerous attempts to get someone from the Arthritis Foundation to respond to me about the Woman’s Day article. I feel like they finally answered me: “Kelly, go take a walk on the beach.”

From Arthritis Today: Two years after her diagnosis, Sandy had grown tired of the side effects from her medications and made the decision to stop taking them. “They told me I’d be in a wheelchair within six months without methotrexate,” Sandy says.  But she found another way. “Sometimes you just have to take charge,” she says. “…I’m very proud of that,” she says. “We’re responsible for our health…”

From Lumina News: After a series of inconclusive blood tests, doctors diagnosed her with rheumatoid arthritis…. “I had a very pure system. I was so healthy. Drugs were not my thing,” she said during an interview.

One real problem with the fake media RA

The folks in the Arthritis Foundation forum aren’t upset that the Beachcomber is not as sick as they are. As Jay wrote, they just felt the story implied that since they do not do as she does, their Rheumatoid Arthritis troubles are their own fault. It seemed like it was assumed that what is advocated in the article would work on their RA.

The argument is not with this woman or Rheumatoid Arthritis natural treatment. It doesn’t even offend me that the Arthritis Foundation implies that my symptoms are my own fault. My problem is something else Jay alludes to: “…they overlook a real problem so many of us face, which is: responding to our critics (including friends and relatives) who are telling us to quit taking all those dangerous drugs, eat better, exercise, take whatever quack product they just read about, and so on, and then we’ll be fine.”

Rheumatoid Arthritis is the enemy. But, I wrote about another enemy in this post: Will the Real Rheumatoid Arthritis Please Stand Up? That foe is the mythical version of RA which we have all encountered. It’s the one in the doctor’s mind when he says we are hypochondriacs. It’s also the one Jay alludes to in which we are dull and lazy and our symptoms are our own fault. It’s Woman’s Day RA. It’s the RA presented in the media in articles like “25 Years in Arthritis” – an Article on Rheumatoid Arthritis by ABC News.

My problem with the public believing in the fake version of RA is that it does not necessitate a movement – or money – for a cure.

Postblog: Maybe the Woman’s Day RA has a new name. Beach walking RA? Anyway, the photos are of my recent happy visit with a sister warrior.

Some posts about perception of RA or natural RA cures: