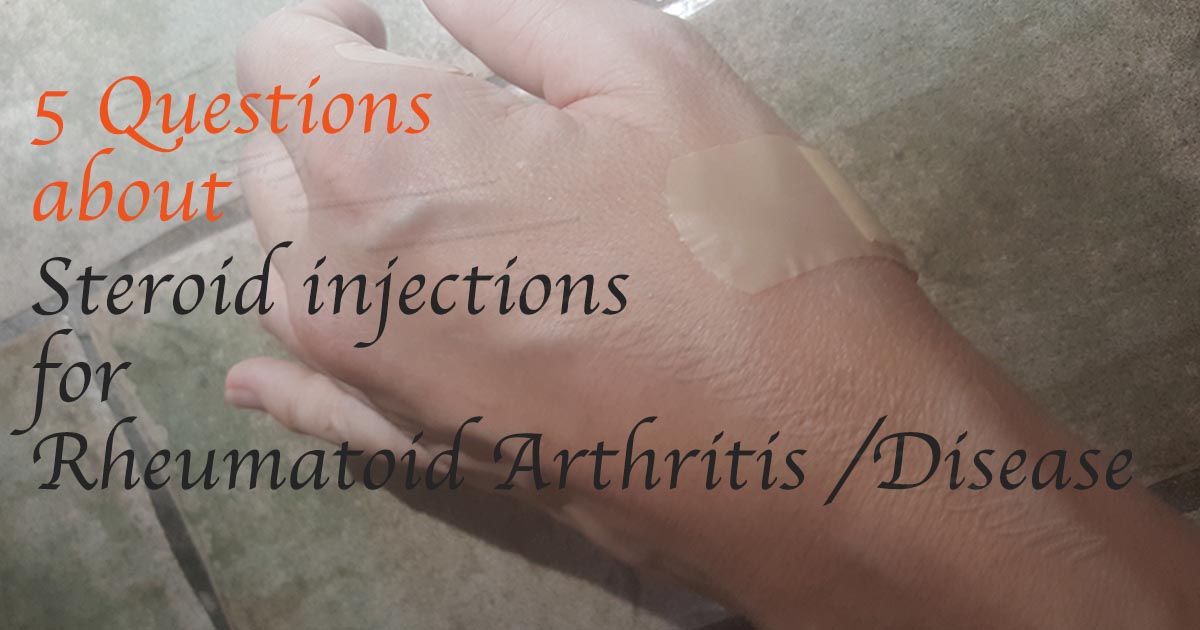 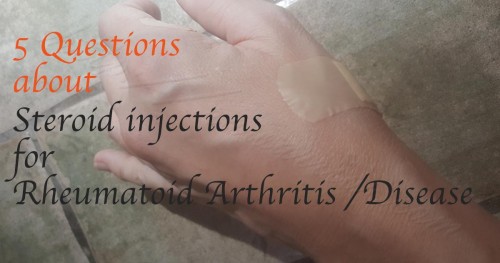 When joints are persistently inflamed, despite whatever therapies or systemic treatments are used, steroid injections for rheumatoid arthritis have been helpful for many people with rheumatoid disease / arthritis (PRD).

For example, my wrist and back of hand joints have been swollen since I had to drive several hours last August, and my hands became more and more useless. I couldn’t hold tools like a hairbrush or a pen. Both thumbs have been angry (about what I’m not sure) for over a year. And a couple of trigger fingers on my dominant hand made it impossible to do most things. Not to mention the shoulders – unbearable.

So over the past week, Dr. Personable injected joints on both hands, wrists and shoulders. We really appreciated what the he said about function being a priority. He said it’s important to deal with “all this synovitis and pain, but function is most important.” (Amazing. Usually, I try to convince doctors of this.) Not only is it more convenient if you can move around and do things, it’s better for you. Of course you keep your bones and muscles stronger if you can move around.

2. Why NOT use steroid injections for rheumatoid arthritis?

Once, a previous doctor had voiced to us his disapproval for steroid injections for PRD: “This is not how to manage a systemic disease. You need to be controlled by treatment.” That is a nice thought. (And I’ll take that deal if I can get it!) I don’t mention it often on the blog because I don’t want to discourage anyone, but like many others, I haven’t experienced that treatment success. Unfortunately, only a minority of PRD has a “good” response to disease treatments.

Dr. Personable said he understood why I’m worried about steroid side effects and cautious about how much medication I use, but not being able to move around is probably worse for my osteoporosis than occasional steroid shots.

Over ten years, I’ve had injections done by different clinicians who use various techniques. My shoulder has been injected from 3 different locations for example. Also, some insist hands and feet must be injected from the back, but Dr. Personable injected my trigger fingers from the front (palm) side. I was told for years it would “hurt too much” that way, but compared to constant the RD pain, it wasn’t so bad. (No guarantees if you try it. My pain tolerance is high.)

4. “Why didn’t steroid injections work well for me?” some have asked.

There are actually several cortisone derivatives that can be used in steroid injections for rheumatoid arthritis. I have seen at least four different medicines listed in my chart after various injections over the years. And they did work differently, so we asked Dr. Personable about that. He used Kenalog, and it worked well with an added systemic response I was very thankful for.

5. Should I get steroid injections for rheumatoid arthritis?

As with every part of your treatment, you need to decide what treatments are best for you personally. As Dr. Personable pointed out, it’s always a balancing act with RA / RD. You have to balance risks and benefits with each treatment or intervention.

What I can tell you is not to give up. It can be discouraging if something doesn’t work the first time or someone offers a negative opinion. But fighting RD is a long war, and you are a warrior.

My DIP joints (near the fingertips) were affected early in the disease, but a doctor said it was impossible. Like most people with rheumatoid disease (PRD), I had no idea what the rules are for the disease. I was lucky to have contact with thousands of other PRD thanks to the internet and I started to analyze the evidence: “But not until I’d read some case studies and articles about Rheumatoid Arthritis in the DIP joint. Over the next couple of years, I looked for answers. I knew what my hands said. And I knew what other patients said. But, why would doctors try to tell us something different. How did it get so mixed up?” Continue reading Do DIP Joints Matter?

Did your chest ever hurt sharply like you were being stabbed? Some PRD have gone to the emergency room because the pain was so severe. Others have been told it’s nonsense to say rheumatoid hurts in the chest… “Like many things in medicine, it is doubted or mocked by some because too little is known. And it is all too real to people living with inflammatory diseases that attack joints. Costochondritis is treated, like other joint inflammation, by rest, NSAIDs, ice or heat, and prednisone. Pain medications can help manage…” Continue reading Chest Pain in Rheumatoid Arthritis: Costochondritis Anyone?