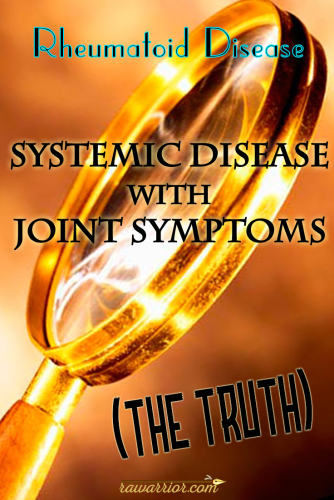 Do you ever wrestle with the disease aspect of rheumatoid disease (RD) – a systemic disease with joint symptoms? From what I’ve seen doctors, patients, care givers, and the public all struggle to grasp the systemic nature of the disease. We don’t want to see ourselves as sick, and that conveniently fits the public narrative that RD’s just a type of arthritis.

We can go on sometimes, denying it’s actually a systemic disease with joint symptoms. And maybe we should, if we don’t see any problems.

Do you ever think about yourself or those you care for having a systemic disease with joint symptoms?

What do you do when the systemic disease with joint symptoms actually creates serious health problems?

Appreciating the reality of a systemic disease with joint symptoms

With the exception of some practical preventive care like immunizations, I think mostly I’ve looked the other way – like a proper ostrich. The onset of my full-blown RD* was accompanied by obvious systemic symptoms. Since then, I’ve had fevers, rashes, Sjögren’s syndrome, irregular blood pressure and heart rate, skin vasculitis, and fatigue at different times.

But somehow I’ve been embarrassed to mention the systemic aspect of RD to doctors, friends or family. It feels like I’m being overly dramatic and I know everyone thinks so. No matter if I know systemic involvement is not rare because I’ve read the research. It still feels like I’m doing something wrong to claim that includes me.

My ostrich ploy was interrupted this week. I finally saw the hematologist (blood doctor) I’ve been referred to since last summer. The doctor reviewed 8 months of irregular blood test results, including persistently increasing platelet levels, and my bleeding under the skin and though the skin without injury. Doc ordered more tests but said it’s likely these are all due to the “off the chart inflammation” of the RD. I was fine, not surprised.

They were also wonderful to help me get a referral to a hepatologist (liver doctor) for a swollen liver found last month when I got an ultrasound for an enlarged spleen. I was fine with this news too, living with it day by day, with persistent rashes and swelling under my ribs.

But what finally caught me was when I heard a medical assistant say my weight out loud. Replay from three weeks ago when my friends insisted I go to urgent care for cellulitis on my leg. The MA had announced my weight aloud. Down five pounds each time. I knew my clothes were too loose, but this news shocked me. I asked whether their scale was accurate, and they said yes, they use it themselves. For the first time, I didn’t feel embarrassed about being sick. I was fine, just scared.

If we ignore the systemic aspects of RD, the truth might sneak up on us eventually. I wish we could wish it away.

As much as anyone, even people with RD (PRD), pretends RD is not really a health problem, the truth remains. Even if RD is treated like a joint disease with systemic symptoms, it remains to be just the opposite: a systemic disease with joint symptoms.

So the first problem is that PRD will have medical problems that need to be dealt with.

The second problem is our recognition that we need to deal with it.

But a third problem follows closely. PRD may have difficulty getting these medical concerns addressed, as we’ve experienced in our community. We remember the tragic example of Danita, a young woman whose death certainly seemed preventable if she would have been taken seriously. In contrast, Glenn Frey had access the most excellent medical care. Yet, it did not prevent Glenn’s death one year ago from complications of RD.

Discarding a pathetic label for a systemic disease with joint symptoms

It’s ludicrous that a systemic disease with joint symptoms has been consistently mislabeled as the opposite, a joint disease with systemic symptoms. Let this become a battle cry of our movement.

HAVE YOU RECOGNIZED THE SYSTEMIC NATURE OF RHEUMATOID DISEASE IN YOURSELF OR PRD YOU CARE FOR? HAVE YOU EVER STRUGGLED WITH THIS FACT?

RHEUMATOID AWARENESS DAY IS 1 WEEK AWAY