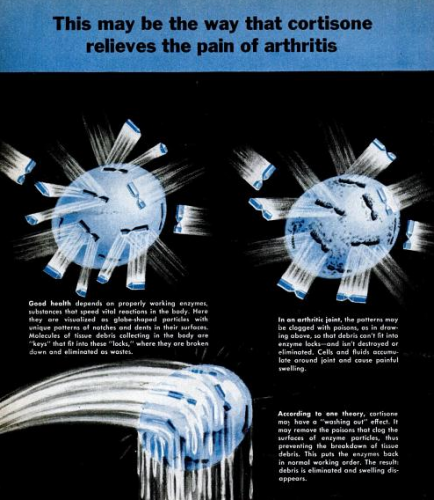 History comes to life with Popular Science magazine’s historical issues. They are conveniently scanned into an archive viewer online. The screen shot here shows part of a graphic from a June 1951 issue. The article describes theories of why cortisone was so successful in treating Rheumatoid Arthritis. Looks like one theory then was that cortisone was literally a fire hose.

The screen shot says a lot, but in case you are not laughing yet, here’s a quote from that article: “Says Dr. Hench of the Mayo Clinic: ‘ACTH and cortisone do not put out the fire, but they do provide an asbestos suit.’”  Asbestos?

When the Nobel Prize winning Mayo doctor called cortisone an asbestos suit for patients, he did not know how right he was.  Of course that was before anyone knew that asbestos causes cancer. And they had no idea the horrific effects cortisone would soon produce.

Drs. Phillip S. Hench, Edward C. Kendall, and Tadeus Reichstein did win the Nobel Prize in 1950 for the first use of cortisone. Click here to see a photo of the doctors in the laboratory where cortisone was first discovered.  And stroll down memory lane at Mayo on this photo filled page with the Mayo brothers, lots of cool facts, and a photo of the plant with the first cortisone lab.

Through history, cortisone and prednisone hailed and feared

During subsequent years, the miracle drug proved treacherous as numerous deaths and permanent side effects occurred. Eventually, cortisone was abandoned by most as a workable treatment for Rheumatoid Arthritis. I’m sure you know the old saying (click here if you don’t). Science marched on though and several derivatives of cortisone proved valuable for many conditions.

“The steroid drugs – among them prednisone, prednisolone and dexamethasone – exert their anti-inflammatory effect by suppressing the cells and chemicals, such as histamine and serotonin, released in the inflammatory process” declared the New York Times in 1981. It is a fascinating account of the advances and setbacks for cortisone-related drugs like prednisone. The title of the piece is telling: Hailed and Feared Cortisone Now Safer and More Varied.

“For one thing, as Dr. John L. Decker, rheumatologist at the National Institute of Arthritis, Metabolism and Digestive Diseases, pointed out, cortisone cures nothing. It is merely an extremely potent suppressor of symptoms. For ailments of limited duration, cortisone and its derivatives are a godsend for millions. But for those afflicted with chronic disorders like rheumatoid arthritis, the corticosteroids are very much a mixed blessing.”

It was hopeful to read about the ways that chemists manipulate molecular variations of corticosteroids to make them safer and more useful. Remember, that article was written in 1981!

Does cortisone work on Rheumatoid Arthritis as a fire hose?

We all know that prednisone (or prednisolone in some countries) is now prescribed to almost all Rheumatoid Arthritis patients at some point. Are you still wondering about the 1950 fire hose graphic? It just doesn’t seem sufficient to me either.

In a more recent review of the fifty years with cortisone, a German rheumatologist writes in 2002: “Little is still known about the precise mechanisms of actions of glucocorticoids in general, and specifically when rheumatic autoimmune diseases are involved. The high effectiveness of these substances and their direct effects via the genomic glucocorticoid receptor allows us to anticipate that uncovering their mechanisms of action will shed deeper insight into the pathomechanisms of these diseases.” Little is still known – we still don’t know exactly why corticosteroids work. But it seems that thanks to them, we have many more clues about the diseases they treat.

16 thoughts on “The History of Cortisone and Rheumatoid Arthritis”