Unfortunately, pain is invisible. I’ve fantasized that it should have a color so that it could be seen and measured objectively. However, pain is just as invisible as stiffness, weakness, and fatigue – the major symptoms of Rheumatoid Arthritis. How can we measure Rheumatoid Arthritis since its principal symptoms are only discernible by patients?

Last month, we considered one cancer researcher’s suggestion that drug trials ought to use patient-reported outcome measures for side effects instead of only physician interpretations. Dr. Basch found patients’ reports significantly differed from clinicians’ reports. What about patient reports of Rheumatoid Arthritis symptoms in a clinical setting? Would they also prove useful?

Some rheumatologists do find value in patient-reported outcome measures of disease activity with RA. Dr. Ted Pincus has published several articles with other doctors which discuss the value of using patient reported measures.  Pincus has demonstrated that patient reports of Rheumatoid Arthritis disease activity can be as useful as more time consuming (costly) measures. 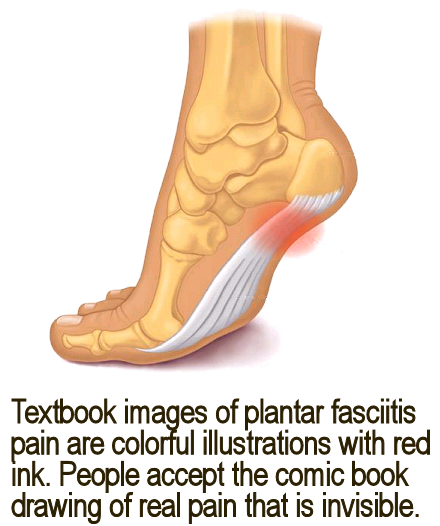 In 2008, Pincus noted that in two clinical trials of abatacept (Orencia), the RAPID3 index proved to be comparable to other indices of clinical status of RA patients.  RAPID3, a simple patient report of pain, physical function, and global assessment of disease activity, provided statistically similar results to the disease activity score 28 (DAS28). Pincus wrote: “There is no intention to suggest that RAPID3 should be used in lieu of ACR or DAS indices and improvement criteria in clinical trials and clinical research. Nonetheless, the finding that RAPID3 is correlated with DAS in clinical trials and clinical settings and has capacity to distinguish active from control treatments in clinical trials, suggests that RAPID3 may be adequate for clinical care. An index of only patient measures such as RAPID3 appears preferable to the absence of any quantitative data other than laboratory tests in the management of RA in routine care, which is the current situation at most of the visits of RA patients to a rheumatologist.”

I’m happy to report that Pincus is not the only doctor who sees value in patient self measurement for Rheumatoid Arthritis and that saving time is not the only reason to use it. Dr. Till Uhlig wrote a Keep It Simple, Stupid article called “KISS” — Embracing Routine Patient Assessment. He wrote: “As patients and physicians attribute different concepts to disease activity, their domains should probably be examined separately. The patient perspective in rheumatic diseases is important, pain being the most important reason for the patient to seek the rheumatologist and the most important area for improvement. Thus, indices of disease activity representing the patient perspective in RA must have a key role when we assess RA and evaluate treatment effects in daily practice.”

In a conversation with my daughter, I recently compared the invisible symptoms of RA to her deafness. For centuries, hearing impaired people were called “dumb.” There was an assumption that deaf people must have a mind or brain problem since there was nothing visibly wrong with their ears. These days we have CAT scans that can show everyone my daughter’s partially formed cochlea. She has never been called dumb.

Someday, the mechanisms of Rheumatoid Arthritis will be understood and there will be ways to more objectively measure the invisible symptoms of RA. Until then, we ought to ask patients about their symptoms and treat the data as reliable. Most patients are reliable as much as most doctors are and most lawyers are. Honestly, medical care is practically useless without patient input. I can think of countless other “invisible” ailments that people – even doctors – are treated for every day. Examples include everything from migraines to urinary tract infections to plantar fasciitis.