A new name and new milestone for tofacitinib 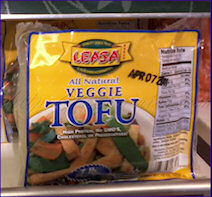 Pfizer announced Friday that CP-690550 tofacitinib (formerly tasocitinib) met its goals in its second phase three clinical trial for moderate to severe Rheumatoid Arthritis. Tofacitinib is a JAK 3 inhibitor, an oral treatment for RA with a different approach than current Biologic RA treatments.

According to Pfizer, over 4,000 patients in 35 countries have been treated with tofacitinib so far. They report that Phase 3 clinical trials demonstrated better improvement than placebo of symptoms of RA as measured by ACR 20 after six months and DAS28(ESR) less than 2.6 and improved clinical function (by HAQ DI). Details were not released.

Does this drug sound familiar? We first reported on tofacitinib one year ago when it was being called tasocitinib: Rheumatoid Arthritis Drug Trials for Tasocitinib aka CP-690550.

Why tofacitinib is a new approach to Rheumatoid Arthritis treatment

Tofacitinib (CP-690550) is considered a new approach to treating Rheumatoid Arthritis because it seeks to inhibit Janus kinase (JAK), a protein which acts as a hub in the cytokine network that creates inflammation. Current treatments for RA interfere with the receptors of various immune cells such as T-cells (Enbrel) or B-cells (Rituxan) or IL-6 (Actemra). Tofacitinib targets a broader phase of the inflammatory process. 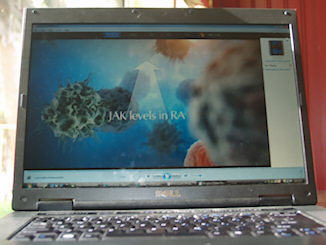 A USB video we received at ACR in November clearly explains the fundamental role that JAK plays in the intracellular signaling pathway.

“The dysregulation of multiple cytokine signaling pathways plays a critical role in the pathophysiology of Rheumatoid Arthritis. A continuous progression of uncontrolled cytokine-mediated inflammatory cascades results in chronic activation of multiple cell types including T-cells, B-cells, monocytes, macrophages and osteoclasts. These dysregulated signaling pathways contribute to the persistent inflammation, systemic illness, and joint destruction that is characteristic of RA… In fact, these cytokines utilize JAK signaling pathways to regulate the inflammatory activity of many cell types involved in RA including T-cells, B-cells, and osteoclasts. Additional studies showed that JAK levels are significantly elevated in the RA synovium.”

I found this list of oral kinase RA treatments currently in clinical trials, producing new hope for not only RA patients but also for patients with other autoimmune inflammatory diseases such as psoriasis and Crohn’s. Two that are close behind Pfizer’s tofacitinib are Eli Lilly’s (Incyte) INCB-28050, a JAK 1 & 2 inhibitor, and AstraZeneca’s fostamatinib (R788), the first oral SYK inhibitor.

Visit the Oral Trials site set up by Pfizer for tofacitinib.