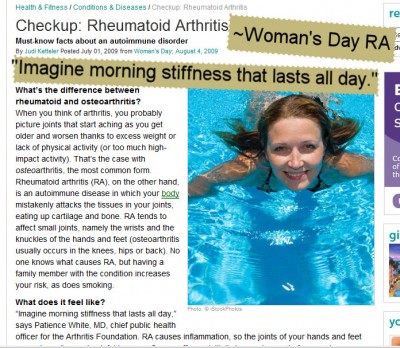 In 2009, I first encountered something I called “the PR problem” with RA. For three years, I’ve disagreed with Woman’s Day magazine over whether the Woman’s Day version of RA is correct. On the blog, we’ve had discussions about various other fallacious articles on RA (some listed below). WebMD magazine offered a similar article last winter (sign-in required – free): “The pain is usually not severe, but more chronic and dull…”

I’m discussing this head on because it matters to patients’ care and outcomes, and because we have nothing left to lose. While it’s true that milder forms of RA exist in a minority of patients, the picture painted is not accurate. Woman’s Day RA is an RA Lite that we’d all trade for.

Why bother with their lies about RA?

When people dismissed my RA, I thought it was just me & I just ignored with it. That’s why people call RA an “invisible illness.” I had no idea it was a pervasive problem until a friend who works in rheumatology research showed me some articles on hypochondria and pain perceptions in RA. He informed me about this part of the RA landscape, even among researchers we trust to find new treatment options. The harsh lies about RA were deflating. What if we’re depending upon people who think our disease is typically exaggerated?

So I addressed untruths point by point, hoping to make RA correctly understood by researchers. Our opinion matters. After all, patients are the only ones who know life on both sides of the fence, making us the only ones to be able to compare life with and without RA.

Reasons the belittling of RA matters

Woman’s Day RA is a character assassination of a disease. It’s a presentation of an alternate reality that matters for several reasons. It affects patients’…

Misinformation about RA is one reason that the RA mortality rate has not improved with the general population and that of other chronic diseases in recent decades. Even most medical professionals don’t realize that arthritis is only a symptom of a systemic disease. In the last three years I’ve known patients who died as a result of RA and other patients whose family members died as a result of RA all while I read about the chic WMD RA.

Patients write to me about Woman’s Day RA, Blueberry RA, and Beach-walking RA. 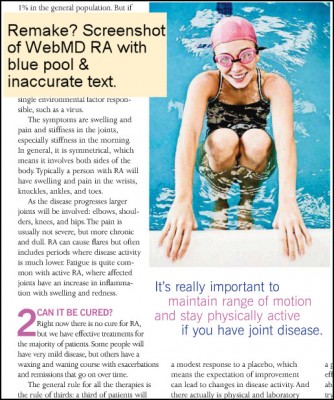 Realizing WMD usually means weapon of mass destruction, I noticed… WoMan’s Day and WebMD both had WMD. I laughed so hard that I said it must stand for “What a Mild Disease” RA. Haven’t we all been told to just try Weightlifting My Dear? After all RA is only a Whimsical Mythical Distraction…

If their version of the facts were true, then I would not do anything that I do.

I would not waste my life creating this website about something as insignificant as this WMD RA. I would not have founded the first 501(c)3 non-profit for RA patients for something as trivial as WMD RA.

The depictions are contradictory and the 700 pages on this website haven’t left much confusing gray area. I don’t see their version of the facts as “a little bit right.” It’s just wrong, however unintentional.

This PR push for WMD RA persists while other companies are improving RA information. So why do certain sources adamantly understate statistics and minimize every aspect of RA? Why do they INSIST that we are wrong?

Is the truth of the real RA somehow too hard to handle?

People write about having to crawl from the bed to the bathroom. Not for WMD RA.

People don’t lose their careers, hobbies, or marriages (the divorce rate is 70% higher with RA) for Woman’s Day RA.

I guess if you don’t have RA, then you have to decide for yourself what to believe. Those of us who do have RA don’t have that luxury.

Phil Mickelson’s doctor emphatically says “he’s not being dramatic” about his Psoriatic Arthritis. And interviewers say Venus Williams “always let her playing do the talking,” so we do know she’s not exaggerating about Sjogren’s syndrome. I guess I’m saying that RA patients who have a similar disease, but are less famous, are telling the truth, too.

37 thoughts on “Woman’s Day RA Is Destructive, but Phil & Venus Have Cred”