Late yesterday, the European Medicines Agency (EMA) rejected the Pfizer’s application to market Xeljanz (tofacitinib). The EMA application was refused because the Committee for Medicinal Products for Human Use (CHMP) “adopted a negative opinion” on approving Xeljanz, stating they were unconvinced its risks outweighed benefits. Last November, the FDA approved the 5mg dose of Xeljanz in the U.S. for “moderate to severely active rheumatoid arthritis” after “inadequate response or intolerance to methotrexate.” Tofacitinib has also been approved for use with Rheumatoid patients in Japan (5 mg) and Russia (5 and 10 mg).

Today, I spoke with Andrew Koenig, Pfizer’s North American Inflammation/Immunology Group Leader, about the decision. He said, “While they (CHMP) believed in the effect for signs and symptoms, they were unsure about the benefit with structural damage. And they were concerned about infections.” The EMA document concerning authorization of Xeljanz acknowledged “Xeljanz resulted in an improvement in the signs and symptoms of rheumatoid arthritis and the physical function of patients.”

Koenig indicated that Xeljanz is approved in the U.S. to treat “signs and symptoms” of RA, but not for structural damage: “We are working with the FDA to expand its label over time.”

Excerpt from the EMA refusal of Xeljanz

The Committee for Medicinal Products for Human Use (CHMP) said that it “had major concerns about the overall safety profile of Xeljanz. There were significant and unresolved concerns about the risk and type of serious infections seen with tofacitinib, which are related to the immunosuppressant action of the medicine. These safety concerns also included an increased risk of other severe side effects including certain cancers, gastro-intestinal perforations (holes in the wall of the gut), liver damage and problems with increased lipid (fat) levels in the blood. It was not clear that these risks could be managed successfully in medical practice. Therefore, at that point in time, the CHMP was of the opinion that the benefits of Xeljanz did not outweigh its risks and recommended that it be refused marketing authorization.”

What evidence of risks and benefits did the CHMP consider?

“We do know this submission was the same as to FDA,” Koenig told me. He confirmed the same data were used for approval in Japan, Russia, and the U.S. The best way for the public to view that data is in the briefing document submitted in a public hearing at the FDA last May.

If you view the document, it’s important to recognize which data apply to the 5 mg dose.

Several pages of charts cover various types of infection risk. While the disease itself is known to increase infections, the risks of the drug must be identified. Therefore, detailed infection data is presented for the nearly 5,000 patients included in the different clinical trials, which shows an increased infection risk with Xeljanz. As with other disease-modifying antirheumatic drugs or immunosuppressants, as well as prednisone, there were several types of infections encountered. Age groups are specified because infection risk is greatly increased in the over-65 age group, independent of any disease or medication.

While it is easy to determine that an increased infection risk exists, it is a complicated question. For example, while tofacitinib risk seems comparable to adalimumab (Humira) or other biologics in some circumstances, Table 31 shows that people who take steroids with tofacitinib had a much higher infection incidence. And in some cases, the lower dose of tofacitinib showed higher risk. Even looking at it in black and white, the risk is easy to recognize, but not as simple to calculate. (I’ve read the sections on the other risks several times; but it’s too much to cover here in one post, and the dilemmas are similar.)

The EMA document states, “treatment with Xeljanz resulted in an improvement in the signs and symptoms of rheumatoid arthritis and the physical function of patients. However, the studies were not sufficient to show a consistent reduction in disease activity and structural damage to joints, particularly at the lower 5-mg dose of Xeljanz and in the target population of patients in whom treatment with at least two other DMARDs has been unsuccessful.”

The CHMP held that improvement in “signs and symptoms” and “physical function” was seen, but there was not consistent evidence of prevention of structural damage. Figure 18 of the FDA briefing compares the treated patients to placebo patients. While the effect looks obvious, it was only statistically significant in some groups. 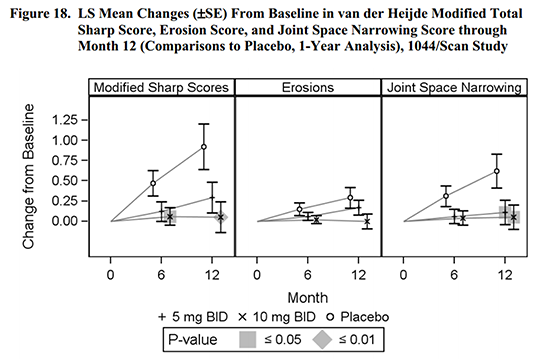 A company’s view of benefits of treatment

The executive summary of the Pfizer FDA briefing provided a discussion of Rheumatoid disease in order to portray the “unmet need,” an important argument in why any new treatment should be approved: “Because RA is currently incurable, the goals of treatment are to reduce disease activity, improve physical function and health-related quality of life and inhibit progression of structural damage throughout the course of the patient’s disease.” I agree with this broad focus.

In the section called “Summary of benefit-risk,” we read, “Up to one-third of RA patients receiving currently approved DMARD therapies show inadequate response in this serious, chronic, progressive and disabling disease that lasts 20 to 40 years and for which there is no cure.” It’s true that one-third of patients are “non-responders,” but remember that the FDA bar for “response” with RA is only a 20% improvement. I’m not sure how anyone’s Rheumatoid disease expires in 20-40 years except by death. I doubt that’s what they meant, but I cannot fathom where they got such an idea.

Risks and benefits from the patient point of view

Two things are missing in this discussion.

First, patients. The CHMP did not allow an opportunity for public comment, nor does it publish minutes or agendas. That is different from the FDA, which allows citizens like me to apply to speak at committee hearings, publishes agendas, and provides a live video feed of meeting activities.

Last night I wondered who wrote the useless definition of RA in Pfizer’s press release: “About Rheumatoid Arthritis: RA is a chronic inflammatory autoimmune disease that typically affects the hands and feet, although any joint lined by a synovial membrane may be affected.”

This lack of communication of disease impact is partially responsible for thoughtless media coverage about their product and I would be surprised if it doesn’t impact people who make decisions about approving medications. Sometime this year, I hope you’ll be able to read my first book on Rheumatoid disease. When I look at the 200 footnotes, I see that if the evidence is there for a lay researcher like me to gather, it’s certainly available to Pfizer with its resources.

People with rheumatoid disease always have to weigh risks & benefits

My only question is whether authorities, the public, or perhaps even companies who create medicines, recognize what the disease impact is so that they can weigh risk to benefits accurately on our behalf.

People encounter risks every day that are higher than the risks with DMARDs: smoking increases cancer risks; obesity increases diabetes risk; tanning beds still find customers. But people faced with a harmful chronic disease have to choose whether to take certain risks with medications that may enable them to continue be functional, active members of society, or possibly live longer, when the medications work well. The risks should be clear, but many people with Rheumatoid Disease will choose to take them, because they see the alternative is so much worse.