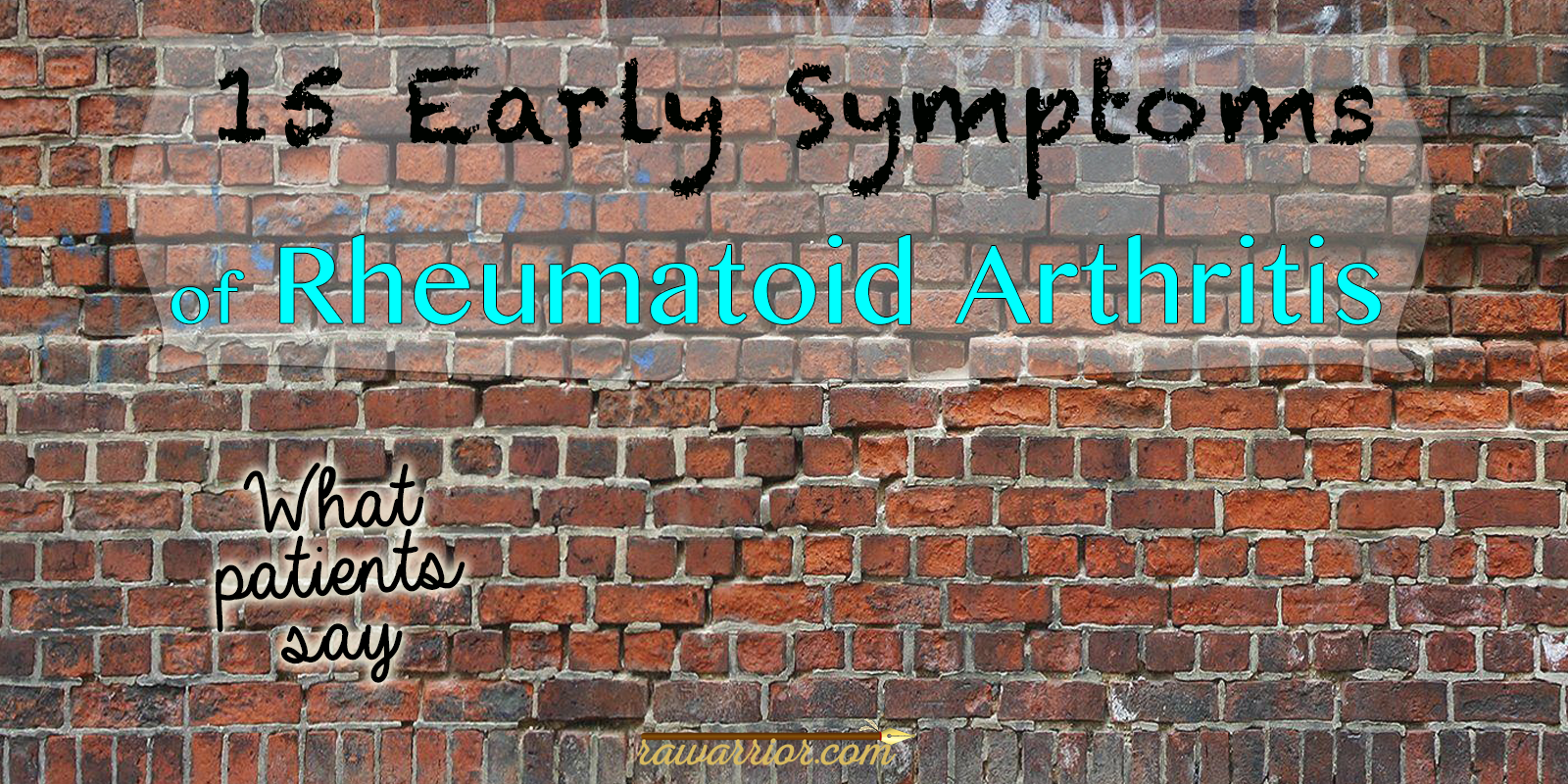 The significance of early symptoms of Rheumatoid Arthritis 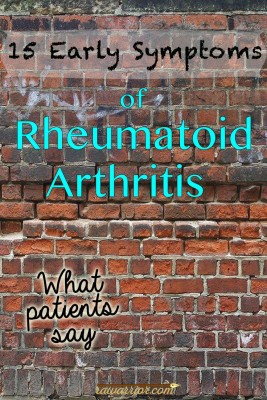 In 2009, I asked people with rheumatoid disease (PRD) to list the first symptoms of rheumatoid arthritis they had experienced. Over 800 people have commented, simply listing their first symptoms. There are also dozens of Onset Stories on RA Warrior. Our experiences with early symptoms of Rheumatoid Arthritis are clues to how the disease starts. Following that breadcrumb trail could lead to understanding more about triggers and causes of rheumatoid disease (RD).

Let’s look at 15 early symptoms of Rheumatoid Arthritis, according to patients’ comments on RA Warrior.

1. Inconsistent joint pain: People with rheumatoid disease (PRD) commonly describe joint pain that seems to move around as it affects new joints over a period of days to months. RD can affect any joint, small or large: feet, fingers, ankles, wrists, knees, shoulders, hips, jaw, spine, ribs / sternum / costochondritis, or sacroiliac joints. Joint pain can be mild, however pain is often severe and PRD describe it as sharp pain, stronger than pain from injury.

2. Persistent joint pain: PRD experience joint pain that persists in specific joints. Pain may be present in single joints or multiple joints. Any joint may be affected (see #1).

3. Fatigue or malaise: PRD often describe sudden unexplained fatigue that interferes with daily tasks. Fatigue from illness is like exhaustion after working, except it occurs without the work.

5. Joint swelling: Joints swell slightly or grossly, suddenly or gradually. Joint swelling is inconsistent and variable. It does not necessarily correlate with other symptoms.

8. Tendon symptoms: Tendon symptoms are very common and often diagnoses separately, especially when they are early symptoms of Rheumatoid Arthritis. PRD report tendon tears, tendon inflammation, and tendonitis (which may sometimes be tenosynovitis according to recent studies).

9. Weight loss: Weight loss is a serious symptom of severe or very active RD because of increased resting energy expenditure and the nutrition loss caused by lack of appetite.

11. Vasculitis: There are several types of vasculitis that can be related to RD. Skin vasculitis has been reported by many PRD. Rheumatoid vasculitis is a serious symptom of RD that has been believed to occur only in well-established RD.

14. All joints at once: PRD have reported whole body flares in which all joints are painful and stiff.

15. Other joint symptoms: Joints may feel warm or look red, or they can look larger even though there is not soft swelling. People with rheumatoid disease say rings become too small. PRD also experience a variety of uncomfortable joint symptoms such as weakness, or a sensation of pulling or heaviness.

What early symptoms of Rheumatoid Arthritis did you experience?

NOTE: This list was created from patients’ reports to RA Warrior. There is no suggestion of the precise incidence of any item on this list. Some resources are provided below.

They don’t do this to cancer patients. When my friend Dave had kidney cancer, they treated his broken leg and his lung and everywhere the cancer affected him. It’s tougher to diagnose kidney cancer in the lung, but doctors don’t refuse to. Yet RD isn’t treated or even diagnosed until it develops precisely the way rheumatologists think it should. Sandy saw 8 different doctors who didn’t suspect rheumatoid disease was causing her blinding eye inflammation… Continue reading Where the Rubber Meets the Road or What If Only the Cancer in Dave’s Kidneys Was Treated?

How I became aware of the DIP RA debate: I hadn’t known my hands were being politically incorrect. I didn’t know the wrong joints were affected. I didn’t know not to go to the doctor when they didn’t look swollen enough. “That’s when I traveled to another state to get an ultrasound that would show the RA that affected my hands more every day. That’s when I met Dr. DIP, who told us…” Continue reading Does It Matter Whether Rheumatoid Arthritis Affects DIP Joints?