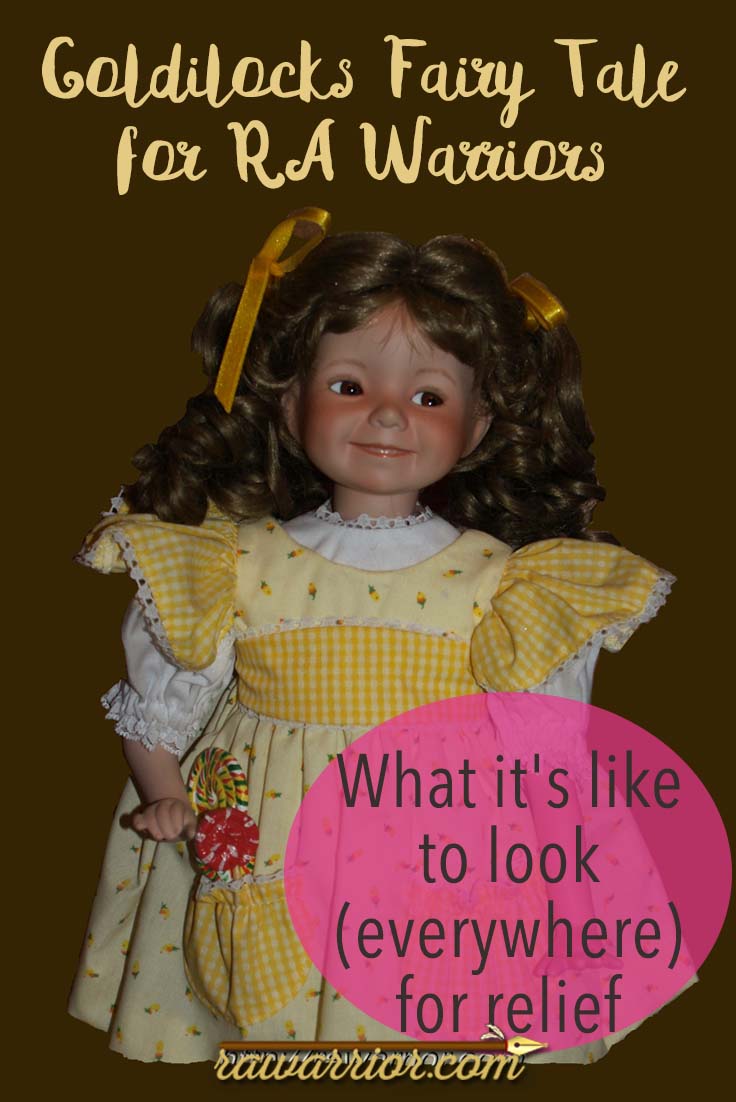 Communication and Inspiration
October 1, 2009May 17, 2018 Kelly O'Neill 8 Comments Humor with RA, Inspiration for living with RA 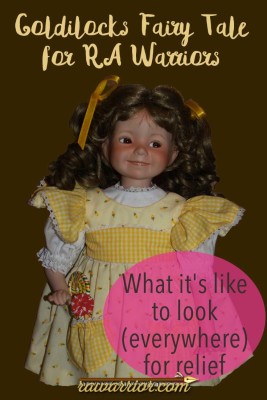 Goldilocks and the Three Bears (and RA)

Once upon a time there was a lively young lady who loved to go for long walks. Goldilocks hiked over hills, up steep rocks, and across walking bridges. She was never afraid. Life was her friend.

One day, while out on a journey, Goldie hurt her ankle. Worried that she might not make it home, she stopped at a house to rest awhile. The name on the mailbox was R. Arthur Itis.

Goldie knocked, but no one answered her. She looked around the house, but could not find a friend. Goldie was a little unnerved because fatigue began to overwhelm her. She had never felt so weak. Maybe some healthy food would help her to feel like herself again.

The table was set for three: three chairs and three bowls. She put a piece of the salmon steak in the big bowl, but she could not eat it because she began to feel nauseous. She nibbled at the brightly colored vegetables in a medium-sized bowl, but that did not perk her up either. Finally, she tried the little bowl of gluten-free macaroni.

That gave Goldilocks just enough strength to make her way to the bedroom. The first bed she spotted was massive and well-built. It was a bed on steroids. She got a few moments of reprieve there. Soon, however, something aggravated her so that she was too uncomfortable to stay on that bed.

Goldie changed to another bed. The second bed had a headboard was engraved NO TNF. It was a designer bed. Goldie lay there for a while, but she was disappointed that the relief did not last.

Still looking for something to make her more comfortable, Goldie changed beds again. She moved to the last bed, a little tiny generic-looking bed. The sheets were woven of pure Peruvian NSAID. Finally, Goldie got a little peace.

All of a sudden, the unsuspecting bear family arrived home. They were not happy that Someone had helped herself to their supper! Eventually, they found the Someone asleep in one of their beds!

Growling, the three bears drove Goldie out of their abode. She was glad to go and she did not stop until she was safe at home. She hoped never to return to the house of Itis.

8 thoughts on “A Fairy Tale for Rheumatoid Arthritis Warriors”