The FDA definition of biosimilars and a pathway to approval 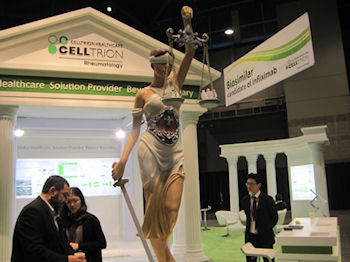 Biosimilars are pharmaceuticals that are similar to biologics such as Enbrel and Humira, but not chemically identical as with generic drugs. If the unique molecules used to create a biologic (from living proteins) such as Enbrel are not cloned, but carefully imitated, they are considered “biosimilar.” In the U.S., 2009 and 2010 laws provide a pathway for FDA approval of biosimilar products, which could include treatments for Rheumatoid Arthritis. “This pathway is provided in the part of the law known as the Biologics Price Competition and Innovation Act (BPCI Act).  Under the BPCI Act, a biological product may be demonstrated to be ‘biosimilar’ if data show that, among other things, the product is ‘highly similar’ to an already-approved biological product.  Health care professionals and consumers can be assured that FDA will require licensed biosimilar and interchangeable biological products to meet the Agency’s exacting standards of safety and efficacy.” A few biosimilar drugs are already approved in Europe for other conditions (non-rheumatological).

The boldness of biosimilars 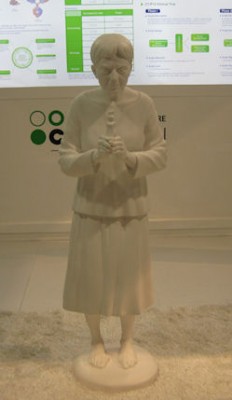 As you can guess from the photos, biosimilars were a hot topic at the American College of Rheumatology (ACR) scientific meeting in November. Patients are anxious to see prices drop for rheumatological Biologics. Everyone is anxious to know how similar “similar” will be.

The exhibit pictured belonged to a Korean biosimilar company called Celltrion and featured a biosimilar for infliximab (Remicade). The blindfolded goddess holding scales of justice had a perfectly sculpted body, including quadriceps and feet. Behind her, in a temple structure, a bent victim stood on painfully folded toes holding a candle with gnarled fingers. I’m still trying to figure it all out. 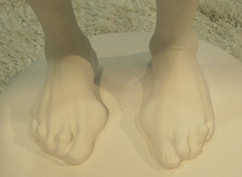 Only days after the ACR meeting came the stunning news that Amgen’s patent for Enbrel had been extended by 17 years. The new patent, called “the 182 patent” after its final digits guarantees that biosimilars of Enbrel will not be sold in the U.S. until 2028. According to the New York Times, “Patents now run 20 years from the date of application, to avoid situations like this where an invention gets extended protection because of delays or maneuvers at the patent office. But since this patent was filed before the law changed, it is governed by the old rules and lasts for 17 years from the date of issuance.”

Another twist: Amgen in the biosimilar business 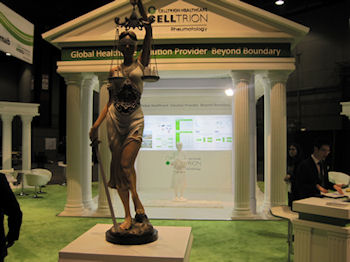 Large pharmaceutical companies like Enbrel’s Amgen join companies like Celltrion in preparing to develop biosimilar products. Over the last month, Amgen has made news with its partnership with Watson as they plan to create biosimilar cancer treatments. “’Biosimilars provide an exciting long-term growth opportunity for Amgen,’ comments the firm’s Robert A. Bradway, president and CEO.”

The law calls for “an abbreviated” process. We’ll see how abbreviated it will be. Will companies be required to conduct clinical trials that are similar to what has been required for the original products?

The U.S. FDA’s page about the biosimilar pathway statutes says, “The Patient Protection and Affordable Care Act (Affordable Care Act), signed into law by President Obama on March 23, 2010, amends the Public Health Service Act (PHS Act) to create an abbreviated licensure pathway for biological products that are demonstrated to be ‘biosimilar’ to or ‘interchangeable’ with an FDA-licensed biological product.” As the actual pathway unfolds in the U.S., consider the approval of Orencia injections last year. Bristol Myers Squibb (BMS) brought the identical molecule in a new method of delivery. The newer injectable Orencia was even produced with the same manufacturing process and location. Yet, BMS was required to prove by phase III clinical trials that the drug had the same safety and effectiveness as intravenous Orencia. If clinical trials are not done as part of the abbreviated process, the first patients who buy the new treatments could effectively be paying to participate in a post-market clinical trial.

13 thoughts on “Are Biosimilars Justice in Competition for Biologics Like Enbrel?”