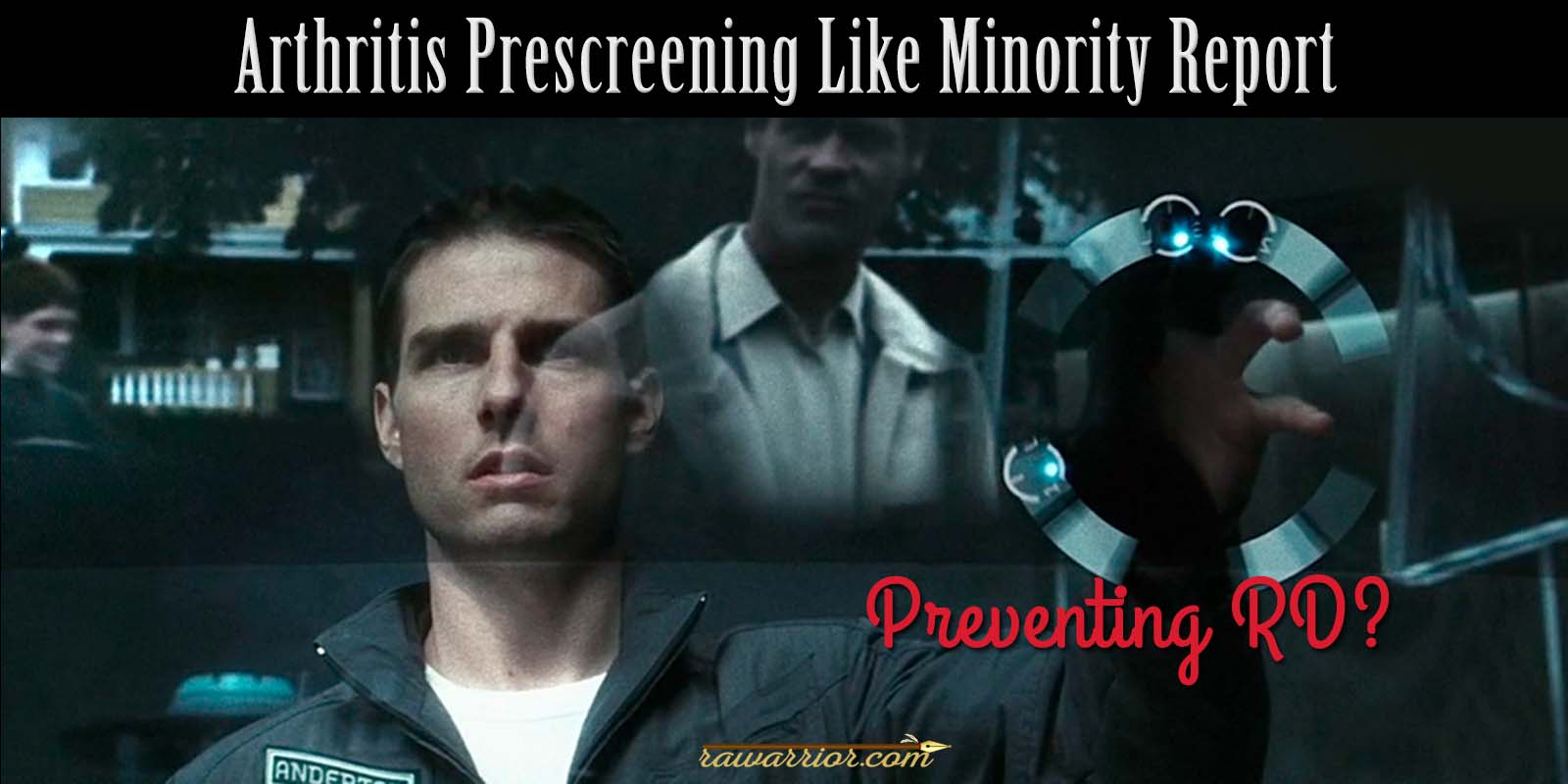 Arthritis prescreening is like Minority Report with Tom Cruise 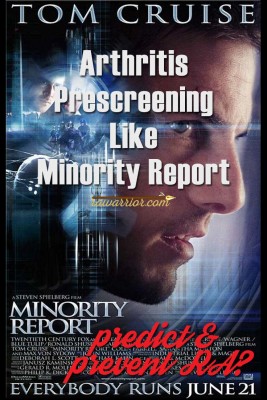 …Or is it? When I read Dr. Scott’s creative newspaper column, comparing rheumatoid arthritis prescreening to Minority Report, the sci-fi flick about punishing crimes before they happen, I didn’t know where to begin. I love movie analogies – there are a bunch of them on this blog. But Dr. Scott Anderson’s blog in the Daily Republic missed the mark somehow.

The research he worries is a waste of time and resources, or possibly ethically wrong, is the research for our cure. Learning how rheumatoid disease begins to destroy a body is critical to learning how to stop it or prevent it. My early morning comment on Dr. Scott’s blog is reprinted below.

But first the title, Science fiction nears reality with arthritis prescreening, of his blog offers a clue to the confusion. Arthritis prescreening may accurately refer to the research, but these words are misleading. Rheumatoid disease is not the same thing as arthritis, as most of my dear readers know too well.

And “preclinical” is also confusing. I have avidly followed this research for several years. In so-called arthritis prescreening, first-degree relatives of people with rheumatoid disease are voluntarily screened with anti-CCP testing. In some cases they are closely observed or receive mild DMARDs such as Plaquenil. Since rheumatoid antibodies are known to be present years before joint symptoms are bad enough to fit diagnosis criteria, I believe many of these arthritis prescreening patients should be considered already sick. Anyone who reads some of the comments on this blog knows that symptoms often begin long before diagnosis, and not always in joints. What about you?

Thank you for your creative analogy. Nicely done.

I’d like to comment on a couple of assumptions that, if expanded, might make more clear the necessity of preclinical rheumatoid disease research. You wrote that the autoimmunity eventually “…escalates into the body’s defensive system attacking its own tissues, causing the arthritic deformities of rheumatoid disease.” Actually, rheumatoid disease (RD) affects several body systems and dramatically increases mortality. Unfortunately, as treatment has been limited to addressing the arthritic symptoms of the disease, mortality with RD has not improved, creating the Mortality Gap, as its called by researchers at Mayo Clinic and elsewhere. Therefore, the urgency of identifying RD early would be greater than you state.

Also, the concept of “preclinical” is a misnomer. Doctors consider RD to be diagnosable “clinically” when they are able to measure symptoms like dramatic swelling in the office in the joints they most suspect to be affected. But few people with RD (PRD) fill that clinical definition early in their disease course. For example, doctors want to see swollen MCP joints, while knees or neck joints are as likely to be affected first. So there is a serious problem with the clinical definition of RD. Most people who have the disease can point to symptoms they have experienced for several years. We have confirmed this with a large survey published by the Rheumatoid Patient Foundation at rheum4us.org.

Rheumatoid arthritis prescreening would be a cure – preventing full-blown disease

Also, please understand that “changing the disease course” often means the difference between being able to be productive and becoming dependent on others due to disability.

While I love your Minority Report analogy, it does break down earlier than you suspect. Having worked as a patient advocate and researcher for several years, I consider those with “subclinical inflammation” to already be PRD. They indeed have very early RD. And while their joint symptoms may still be mild, the RD could and often has already affected their cardiovascular system, lungs, skin, or eyes.

I have talked with researchers and watched this research eagerly for several years as I’ve watched 3 of my 5 children exhibit symptoms that I know are too early to diagnose in the US. With musculoskeletal ultrasound, used widely in Europe, it would be easier to identify. The expensive MRI and PET scans you mention are not necessary.

Also, the test that ought to be run for identifying RD is an anti-CCP test that identifies antibodies to citrullinated protein. It is not very expensive. It is highly specific to RD. There is not a high false positive at all. You may be referring to the rheumatoid factor test, which is not very specific to RD. It was just created first and named thusly.

Finally, the medicines that might be used in such very early RD situations would not necessarily be expensive as you say. Methotrexate is the drug of choice, used in very low doses. It is not very expensive compared to biological medicines which might be used if the disease progressed despite early treatment.

Thank you again for covering this topic. Coverage of RD tends to be slim and glib.

Like Dudley Do-Right, rheumatoid arthritis prescreening could save lives

My comment to Dr. Scott’s blog was typed into a comment box and not as well done as I wished. The points are still important enough to share with you here, but there’s one more thing. Personally, I wish there were an effective way to convey the enormity of possibly averting even one full-blown case of rheumatoid disease. Is there a way to explain that without the emotion that makes people discount patients? Here’s a quick stab at it.

People who live with the disease full time would give almost anything to have been able to alter their fate. Mild cases aside, RD is suddenly and progressively disabling, carries a heavy burden of systemic disease contributing to earlier death, and causes excruciating pain in any or all of dozens of joints.

The Rocky and Bullwinkle Show cartoon is a better comparison than Minority Report. Snidely ties people up on railroad tracks where they are inevitably in grave danger from oncoming trains (hilarious video below). Dudley Do-Right finds and rescues them.

First-degree relatives with rheumatoid antibodies are like the people tied to the track (coincidentally most of them women). Treating them to delay or prevent full-blown disease is a rescue no one can underestimate. Anyone who has watched this disease destroy a loved one would not deny the value of such a rescue.

WHAT DO YOU THINK? IS IT A WASTE OF RESOURCES TO STUDY HOW TO PREVENT RD? LET US KNOW IN THE COMMENTS.

Do you have RA / RD? Are you interested in learning about a study for a new investigational medication? Click here to learn more.