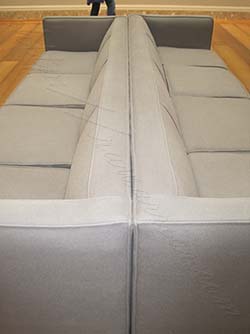 This past week, someone turned up the volume on my chest pain. I was glad I’d heard other patients say they went to the ER for chest pain and it turned out to be “just” costochondritis. Maybe that prepared me so I wasn’t frightened when it happened to me. The chest pain has gotten severe, and it joins the chorus of the shoulders, knees, neck, hands, wrists, and toes… A chorus of disharmony.

Costochondritis is not new to me. The first time we met Dr. Smart, doc pressed on my rib joints and asked, “Is that tender?” Surprised to be asked that, I said, “Yes.” Doc said it’s common with RA. Really?

Common like cricoarytenoid joint arthritis (which doc didn’t believe in)? Or like ear pain? Or neck inflammation? Or shortness of breath? Or other Rheumatoid Disease-caused problems we don’t know what to do about?

(Doc never doubted my DIP joints though – and injected one of them with steroids.)

Costochondritis: one of the neglected Rheumatoid symptoms 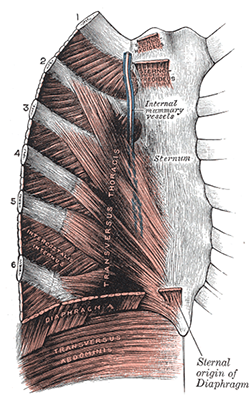 As early as 1964, the journal Radiology published a study explaining that the effects of Rheumatoid Arthritis on the rib joints “have not been adequately described in the literature.”[1] Mayo Clinic’s description of costochondritis makes it clear the word describes a symptom, pain or inflammation of the rib joints that can be caused by various illnesses.[2,3] The term is also confusing because there can be varying diagnoses with similar symptoms, as you can see in the Medscape costochondritis diagnosis page.[4]

But I’ve also read some skeptical articles about the symptom, to put it politely. Costochondritis is considered by many a garbage can diagnosis or related to hypochondriasis.

Costochondritis is sometimes distinguished from Tietze syndrome because the latter has swelling. However, as we’ve learned, inflammation often includes inconspicuous swelling. I suspected my own rib joints were swollen yesterday, and compared to how they are now, I’m certain of it.

With the many common RD mix-ups like this, my solution is to specifically describe what’s happening, especially when talking to a doctor, and leave out the hot-potato word. Without thinking, that’s what I did in my inventory post: it discusses ribs along with clavicle inflammation, but doesn’t say costochondritis.

Pain along the sternum on both the left & right sides. Tender if touched. Worse with activity.

Like many things in medicine, it is doubted or mocked by some because too little is known. And it is all too real to people living with inflammatory diseases that attack joints.

Costochondritis is treated, like other joint inflammation, by rest, NSAIDs, ice or heat, and prednisone. Pain medications can help manage severe costochondritis. And if it is persistent, steroid injections can be used. Usually, as with other joints, the inflammation subsides to a more manageable level in a few days. I’m counting on that because the only other solution I can think of is to not breathe. It hurts too much.

Have you had pain where your sternum meets your ribcage? Did you ever notice swelling? What did your doctors say?

95 thoughts on “Chest Pain in Rheumatoid Arthritis: Costochondritis Anyone?”