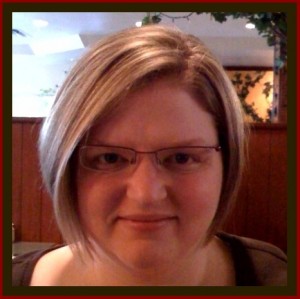 Last month, we took a look at Rheumatoid Arthritis in the vocal cords or larynx, called Cricoarytenoid Arthritis (CA). I hope you’ll read both blog posts on CA, Part 1 and Part 2, in which you’ll find some of the common symptoms to look for and some surprising statistics about CA in RA.

Doing research on Rheumatoid Arthritis, I have encountered several remarkable RA stories – all with actual lives attached! One of those lives is a fun loving lady named Stephanie. Today’s blog is a treat: in this profile in courage, you’ll meet a fellow RA’er who lost her voice permanently in 2004 due to Cricoarytenoid Arthritis.

How did I find out Stephanie has CA? I knew that she had Rheumatoid Arthritis and we had chit-chatted a little on Twitter. I had seen her cooking blog. One night, I noticed her bio said “voiceless chickie.” I knew that was either some weird joke – or her RA!

Stephanie has had RA most all of her life. Her Juvenile Rheumatoid Arthritis began at age two. She endured years with no RA treatment due to the confusion of doctors about JRA and the state of science / RA treatments at the time. She even waited for an entire year to see a rheumatologist on two occasions.

The doctors were unable to recognize all of Steph’s RA symptoms as Rheumatoid Arthritis. Some of her main complaints were problems with her tendons, eyes, skin, lungs, and you guessed it: her larynx. Of course, she has had lots of joint pain and weakness, too.

Steph’s vocal cords left her unable to speak for 5 whole years. Her many years with untreated or undertreated Rheumatoid Arthritis left her vocal cords and lungs permanently damaged.

There are at least two morals to Stephanie’s Cricoarytenoid RA story:

First: There is no perfectly typical pattern to Rheumatoid Arthritis onset.

Second: However, it is critical that we promote better education of doctors, patients, and the public about what Rheumatoid Arthritis can do to a person so that early diagnosis and treatment is possible. This brave woman has many other things to teach us. I hope you will read her whole story on our Onset Story pages. The ending is not only fascinating, but critically relevant for many of the goals of RA Warrior.

Note: In this video on her own blog you can actually hear Stephanie’s voice which has recovered slightly now that she has begun to take the DMARD methotrexate to treat her RA during the last few months.