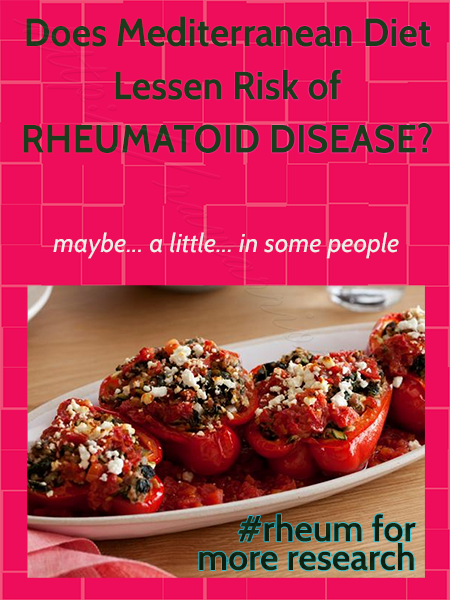 “The Mediterranean diet, rich in fish, plant food, mono- and polyunsaturated fat, and including moderate wine consumption, has been suggested to protect against e.g. cardiovascular disease, but its effect on RA development has only been studied to a limited extent.”[1] 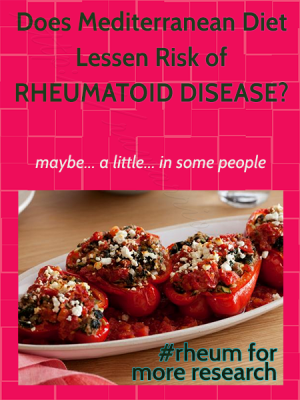 People who had been diagnosed with RA were asked about the food they ate during the year before being enrolled in the study, including Western diet, Mediterranean diet, vegetarian diet, vegan diet, or other specific diet. “9% of the RA-cases (n=122/1296) reported to consume a Mediterranean diet the year before enrolment compared with 12% (309/2661) of the controls, and 4% (n=47/1296) of the RA cases and 3% (80/2661) of the controls reported to consume a vegetarian diet.”

Diet and lifestyle questions need to be studied

Questions of diet and lifestyle are often tangled in controversy when considered in the context of chronic disease. The onus is often placed on individuals to prevent developing chronic diseases that increase healthcare costs. However, “common sense” does not always parallel scientific evidence; we must ask even the questions we consider “obvious” and examine evidence objectively.

Findings related to the risk of developing rheumatoid disease and diet

Here’s what the study concluded: 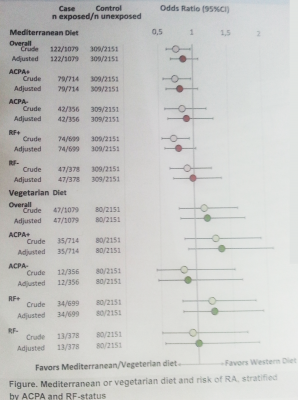 1) PRD who said they consumed a Mediterranean diet had a lower risk of being diagnosed with RA in an unadjusted analysis. However this association disappeared after adjustment for potential confounding factors such as body mass index, smoking, formal education, and physical activity.
2) PRD who were ACPA (anti-CCP) positive or rheumatoid factor positive had a tendency toward lower risk with a Mediterranean diet.
3) There was no relationship found with PRD who consumed a vegetarian diet.

What caused the small difference in people who were antibody positive? Were there other differences at their disease onset?

Some who have been diagnosed with RD fit a profile that is considered typical; and others of us developed the disease despite the lack of what are sometimes considered risk factors. Personally, I should’ve been safe from RD since nursing babies is considered protective from it[2]… Exercised, never smoked, and ate a healthy diet. What about you? Do you think diet or another factor impacted whether you developed rheumatoid disease?

Modeled after Food Network’s Hell’s Kitchen, the original RA Kitchen project started because  “we need easier –FASTER – recipes. We often need different tools. We need ideas for getting more of those certain ingredients into our food: Omega 3’s, anti-oxidants, and vitamins to fight infection…” Click to continue reading Rheumatoid Arthritis and the Kitchen: Hey, We All Eat!

Cigarette smoke and other toxins contribute to the risk of RD. Smoking is one of the few risk factors that emerges consistently in studies of rheumatoid disease, and has led to the study of other environmental risks. Specific studies are beginning to untangle the risks from the myths of What Causes Rheumatoid Arthritis Disease to Trigger? Read more on Smoking and Rheumatoid Arthritis: 6 Things You Need to Know.

32 thoughts on “Does Diet Influence the Risk of Developing Rheumatoid Arthritis (RA)?”