One perk of having a blog is that you have a place to blow off steam sometimes. Remember when I got robbed and the thieves found their bliss at Target, who tried to pin the bill on me? I always say RAW is my front porch. Where we can just hang out. Or tell it like it is. 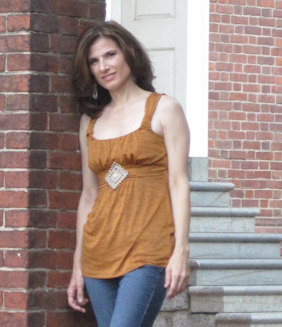 A writer sent me an email back in February, pitching an interview for a magazine I’d never heard of. She said the article would be published in the spring issue of Women magazine in print and online. We set up the interview.

Of course, I requested a few copies of the magazine, one for my records, one for my mom, and a couple to share and she gladly agreed. Over the next few months, I wondered why I never heard back about the interview. Often, editors send a proof to be sure that quotes are accurate. They never requested a photo either. And as spring ended, I wondered whether the article was ever published.

When the writer contacted me in May to do a second interview, she mentioned that the two stories would appear in the summer and fall issues. Then, in June as I left for San Francisco to speak at a conference, I got an email with a PDF of the article. Reading over the content, I saw Mia had contacted Eric Matteson of Mayo Clinic for a couple of quotes which nicely substantiated points in the interview. Good work. But the images looked out of place.

I forwarded the article to a mutual colleague who called the choice of images “inappropriate.” I thought about it for about a minute. What’s wrong with a picture of an RA patient? Why did they ruin a well-written article with pictures of these models on a bike? It would be a rare person with RA who could ride a bike or have those beautiful hands.

Busy, the last thing on my mind were magazine models & Kim Kardashian 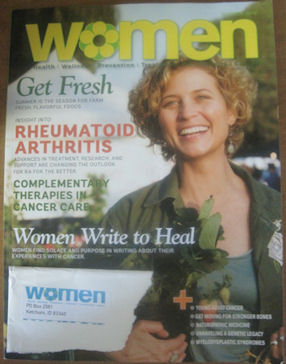 The article was far from my mind as I was busy preparing to travel and speak about what patients need and how industries should work together with them. Have I ever mentioned that it’s HARD to travel with RA? Or manage around crowds?

Someone told me he’d seen an actual print copy of the magazine before meeting me in San Fran, and wondered at how I looked so different from my picture in the magazine. So… the print copies exist. And I still don’t have one. Wonder why. I joked that no, I hadn’t changed my hair color – they obviously used a model for the magazine.

My curiosity aroused, I sent another email inquiring about obtaining copies of the magazine as originally anticipated. Finally, I received this terse reply from an editor, “I will put a copy in the mail today.” “A,” as in ONE. Are they that valuable?

My single much-requested copy of the magazine finally arrived. A bit dismayed at this point, I didn’t even open the envelope for a few days. Cleaning my desk, I pulled it out of the envelope and saw RHEUMATOID ARTHRITIS was an all caps cover story and flipped inside to see which biologic ad they sold next to my story. This and this alone is the purpose of an RA feature in a magazine. To sell the adjacent ad.

It turned out to be a Vectra DA ad, which surprised me because the RA article itself contained a sidebar story about the Vectra test. This is a classic play for fashion magazines, pretending a story just happens to appear right next to an ad for the same entity. While my hair was under the dryer today, my stylist put OK! magazine in my lap – I’d never seen one before. On the cover: Kim Kardashian. Next page: a liquor ad with Kim. Then a story about Kim. Then, Kim and her sisters in a Sears ad for a Kardashian clothing line. The lines are blurred between what is a “story” and what is an ad.

In Kim Kardashian’s case, she probably benefits from all of the above.

However, RA patients are different from Kim: The writer of the RA article was paid. The editor who refused to let my mom have a copy of the article got paid. The art and graphics departments were paid. The sales rep who sold the Vectra DA ad was paid. The printer and publisher of the magazine were paid. The models on the bike were paid. And the photographer was paid. I doubt they paid Matteson who’s on salary at Mayo with media comments being a frequent part of his job. Yet, patients (me in this case) can’t even get them to cough up more than one copy of the article which wouldn’t exist without my interview.

This is the way it’s done in fashion or healthcare. And it’s lawful to do it this way. But it’s also fine for patients to sit on the front porch and talk about why they don’t like it.

My beef is this: It’s offensive how little patients are respected. This is another example of patients being treated as commodities. What if the magazine treated patients the same way they treat everyone else?

PDF of the Women magazine article with the models on bicycle

PDF of the December WebMD article using pictures of a patient

Edit 8/11/12: Late yesterday, I had a very productive conversation with a managing editor at Women magazine. She also sent me an email apologizing for the oversights addressed in this post. I was very encouraged by her commitment to improving the way RA is portrayed in media. Please consider contacting this magazine and encouraging them in taking this stand. Also, above, in my post, I call the article “well-written” and I stand by that. There were very few inaccuracies and they were likely caused by the author’s reliance on other sources which were themselves faulty. In spite of that, the content of the article is an improvement over what is usually reported about RA. I am encouraged that we have made and are making a difference.

27 thoughts on “Kim Kardashian, Magazines, & a Trendy Practice that Bugs Me”