Wouldn’t it be fun to do a happy little blog? But, I was dancing through my happy mommy life and RA busted down my door. I did not pick this fight. I just decided to fight back.

This blog is written in reply to a question on yesterday’s blog about my journey with Rheumatoid Arthritis medicines. I do keep many personal details off the blog. However, I thought about this and realized it may help to document the RA medicine process, either for someone new to the idea of RA medicine or some doc in a dark office (only semi-private joke, click here to read.)

The first RA specialist I saw did not treat RA aggressively with Biologics. That was not the only reason that Dr. Laptop did not become my RA doctor. The RA specialist I finally got in to see prescribed methotrexate right away. She spent several minutes explaining Biologics to me and began the process of pre-approval for Humira with my insurance. I went on both medicines within a few weeks. This was several months after my RA symptoms had become “full blown.” There are more details here in my RA Onset Story.

The doctor was hopeful. She did seem to think that I would get much better. I kept telling her that I wanted to run and play tennis. 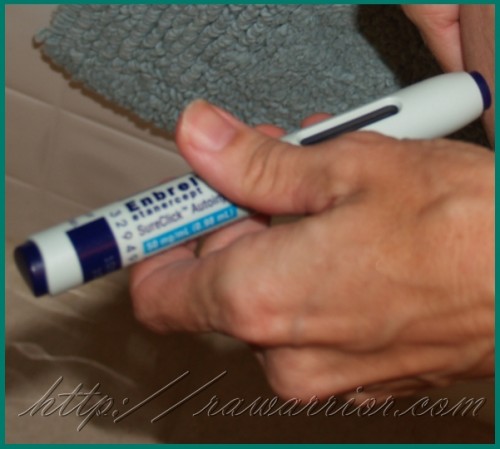 The methotrexate and Humira helped a lot. However, the RA continued to spread until it had reached every joint. There really are joints that I did not know about until they hurt. The swelling went away. Some of my blood tests improved, but the anti-CCP continued to rise. So did my methotrexate dose.

After about a year, the rheumatologist doubled the Humira dose to one shot per week. Still, the best improvement of my RA symptoms was about fifty percent – never more and usually less. I would always tell her that I was hoping for more relief. I did not talk about running anymore; I’d say how much I wanted to be able to dress my baby or style my hair.

The doctor would often tell me about another patient my age who was getting better all the time. Of course, she’d had some joint replacements, but she was doing much better now. One day, I saw her – the other patient. She could not walk right. She had a permanent handicapped license plate. This was the example I’d been given repeatedly, saying that I should look forward to getting much better?

It was difficult, but I finally changed RA specialists, hoping to try a different RA treatment. The next RA medicine I tried was Enbrel.  I began to use Enbrel about the time that my RA blog went live. Some of that story is on this site.

There were two weeks between the Enbrel and the Humira due to a kidney infection. I so appreciated that opportunity to learn a lot about how much the RA medicines were helping me with fatigue. A few days without the medicine and I had could barely move do to RA fatigue. I think there was also more pain and fever.

Enbrel did not help me as much as Humira had at first. It may have improved my RA joint symptoms about 20-30 percent. I had increasingly severe injection site reactions, but the RA doctor did not mind, so neither did I.

After about four months, I developed hives. I was treated by a dermatologist several times to no avail. The RA specialist did not want to try a different RA treatment, but I wondered if another rheumatologist would give another opinion.

By now, I had learned quite a bit from reading online and from talking to other RA’ers. I noticed there is a wide variety experiences – even remissions. I wanted the kind of improvement that we hear about in the RA drug commercials or in the drug companies’ online videos or in the newsletters in my email box…

There was another comment yesterday that I hope you did not miss. Songbird’s RA is like I described yesterday, but only when she is sick and cannot take methotrexate.  Her words were a blessing, partly because my turn may still come.

Last fall, I was so happy to find a new RA doctor and begin Orencia treatments. I had a lot of hope that this would be my magic carpet to escape RA. Not yet.

Next month the dose will be raised. So will my hope. And guess what? I was very happy last week to get my first handicapped parking permit.

25 thoughts on “My Journey with Rheumatoid Arthritis Medicine”