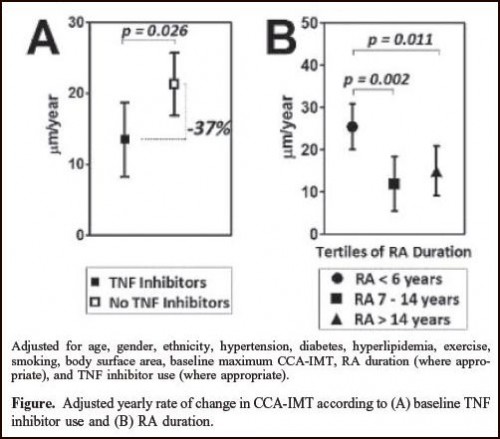 New Studies presented at ACR 2010 (the American College of Rheumatology’s annual meeting) examined of the heart disease of Rheumatoid Arthritis. One study called Longitudinal Predictors of Progression of Subclinical Carotid Atherosclerosis in Rheumatoid Arthritis looked for factors which predict heart disease in RA patients. “Coronary and extra-coronary atherosclerosis are increased in rheumatoid arthritis (RA) relative to controls; however, few longitudinal studies have explored predictors of change in atherosclerosis in RA patients.”

They monitored plaque or progression of plaque stenosis (narrowing due to plaque) especially in the internal carotid artery, which is harder to see, but more important than other arteries. Their data showed “evidence for systemic inflammation and RA disease activity as a contributor to progression of atherosclerosis in RA patients.”

Key findings of the study:

Another study (At What Age Is Carotid Ultrasound Most Effective in Predicting Cardiovascular Events and Mortality in Rheumatoid Arthritis?) examined patients with Rheumatoid Arthritis who were free of cardiovascular (CV) disease. “(They) imaged the carotid arteries for plaque and intima-media thickness (IMT) using high-resolution ultrasound and then followed patients prospectively until they developed an acute coronary syndrome (ACS), died from CV causes, or reached a censoring date. ACS were defined as unstable angina, myocardial infarction, cardiac arrest, or death due to ischemic heart disease. CV death was defined by mention of a CV cause in the death certificate.”

Interestingly, they determined that the “ability of carotid ultrasound to predict CV events in RA varies with age.” “Plaque and IMT are most strongly associated with CV outcomes in younger RA patients.”

Are there ways to avoid the heart disease of Rheumatoid Arthritis? 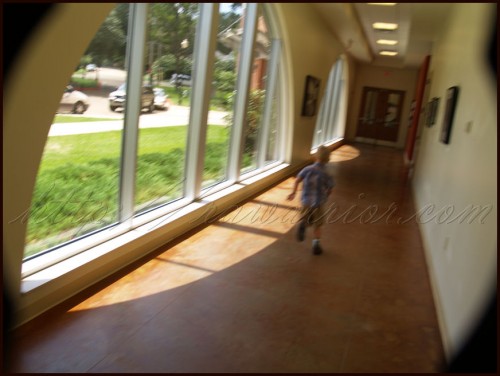 How do I hope to be like an elephant? I tell my kids that one of my goals is to get very gray and wrinkled… and then one day to get hit by a bus. It would mean I outlived my RA. Rheumatoid Arthritis kills almost everyone it strikes, but it seldom gets the blame. It has a hired gun that gets more press: heart disease. That’s what is on the death certificate of the majority of people with RA. Is there anything we can do to live to age one hundred to get hit by that bus?

Take aways for RA patients and their doctors:

Obviously, more study on RA heart disease is needed. There may be a few things RA patients can think about already:

Note: If you have of your own blog (any kind), maybe you’ll want to participate in our first blog carnival this week. Read about the Rheumatoid Awareness question here. Email me the link to the post by Tuesday at 10 p.m. EST.