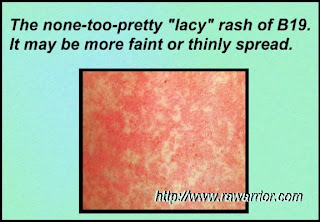 Does human parvovirus B19 Cause Rheumatoid Arthritis?

There is a counterfeit Rheumatoid Arthritis. But it is only a pretender, so it doesn’t inflict the harm that RA does. It is like a shadow boxer. However, the pain is real – for as long as it lasts.

Human parvovirus B19 is a common childhood virus. It causes Fifth disease, a minor childhood disease which is similar to the measles. There are usually cold symptoms and a low grade fever. There is often a rash on the face which is bright red. It is called “slapped cheek.” But, it’s often so not simple in adult women.

Parvovirus often mimics Rheumatoid Arthritis, causing pain, stiffness, swelling, and disability. Approximately 60% of women who get B19 contract the sudden arthritis in multiple joints. However, children and men who are infected with parvovirus do not usually suffer from such arthralgia.
Normally, joint symptoms last only a couple of weeks. However, in a small percentage of patients, they may last for several weeks to several months. There is also initially a distinctive rash on the trunk and limbs which looks a lot like lace.
Several studies have been done to investigate whether parvovirus B19 is in any way connected with actual Rheumatoid Arthritis. However, they have concluded that it probably is not.
Consider this: the percentage of people who have the B19 antibody (showing they have had the virus) is about 50%. Similar numbers have been shown for Rheumatoid Arthritis patients. If B19 were the cause of Rheumatoid Arthritis, 100% of RA patients would have had the virus.
Studies continue to examine whether parvovirus B19 could be one trigger for Rheumatoid Arthritis. Also, B19 may behave differently in people who have RA. It could be one of those “chicken and egg” questions.

Researchers say they don’t know what causes human parvovirus, but I met a doctor once who says he does know. In 1998, when my family contracted the disease, I went to an urgent care center on a Sunday. Every joint, especially my cervical spine, was inflamed. I could barely move. I had no idea what was wrong with me. I was terrified. The lacey red rash covered my legs.

The doctor took one look at me and he knew what was wrong. I guess it was too traumatic to tell me to my face since he decided to tell my husband first. He said he was sure he was right.

He told my husband that my joint pain was nothing to worry about. It was caused by my imagination. Yep. Simple as that. And the rash? He looked right at it and said that it did not exist. Whew! According to him, I was not sick; I was a fraud.

Double déjà vu: I wish I could report that he was the worst doctor I have ever met. Unfortunately, though, I have been through the exact same process a few times with regard to Rheumatoid Arthritis. It has been a double déjà vu. First, with the arthritis symptoms; and then, with the “hysterical woman” diagnosis.

Postscript: It was a classic case of parvovirus.

I did take my kids to the pediatrician that week when they developed the classic B19 symptom of “slapped cheek” rash. My kids were easily diagnosed with the highly contagious “fifth disease” which is caused by human parvovirus. The docs got all excited about how closely our case replicated the photographs in their books.

More information on human parvovirus B19:

42 thoughts on “Parvovirus B-19 and Rheumatoid Arthritis: Who is the real fraud?”