“Pfizer Announces European Medicines Agency Acceptance Of Regulatory Submission For Tofacitinib For The Treatment Of Rheumatoid Arthritis: Pfizer Inc. (NYSE:PFE) announced today that its Market Authorisation Application for tofacitinib (development code CP-690,550), a novel, oral JAK inhibitor being studied for the treatment of moderate-to-severe active rheumatoid arthritis (RA), has been validated by the European Medicines Agency (EMA). Validation means that the EMA has confirmed that the application is complete and the agency is beginning its review procedure.” 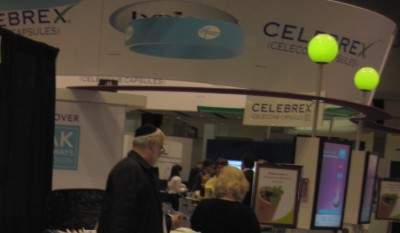 Pfizer at the 2011 American College of Rheumatology Meeting

Between JAK, Enbrel, and Celebrex, Pfizer visibly dominated the entrance to the Exhibit Hall at ACR 2011. In the photos, you can see the edge of the large purple and blue rings seeming to suspend from the sky. We told everyone to look for us under the Pfizer “halos.” In an article for Pharmaphorum, I described Pfizer’s imposing presence at the 2011 ACR meeting: 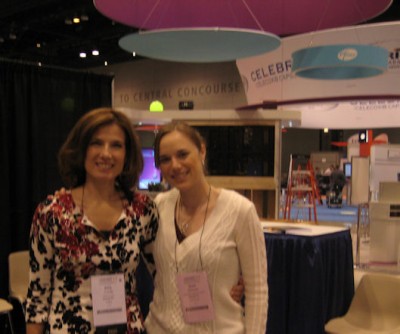 “Pfizer dominated chatter about the treatment pipeline, presenting data about its novel JAK inhibitor for an oral treatment of Rheumatoid Arthritis. The buzz was enough to force some of their oral sessions to broadcast a feed into overflow spaces. Selected Pfizer investigators and representatives reported on the numerous phase 2 and 3 ORAL Trials as well as long-term extension studies.

“The JAK compound, tofacitinib, has now been tested in almost 5,000 RA patients in approximately 35 countries as mono-therapy and in combination with other disease modifying medications. Efficacy was similar to IV and injectable Biologics that are currently approved for RA treatment with approximately 65% of patients achieving at least ACR20 (20% reduction in disease activity). Patient reported outcomes also showed significant improvement and radiographic progression was arrested when measured at six months with the higher dose.”

According to Nature Reviews Drug Discovery, after several years of research, we are still learning to understand how “small molecule” JAK inhibitors modify immune activity and how to use them to create therapies. We’ll be watching for Pfizer to also file with the US FDA, possibly in the next year. Other JAK inhibitors are close behind Pfizer’s tofacitinib including Eli Lilly’s (Incyte) INCB28050 (JAK 1 and 2 inhibitor). Phase II studies are also underway by for JAK-1 by Galapagos and for a JAK-3 by Vertex. Here’s a list of JAK inhibitors in the pipeline.

More about the JAK-3 aka tofacitinib (Pfizer ORAL trials)