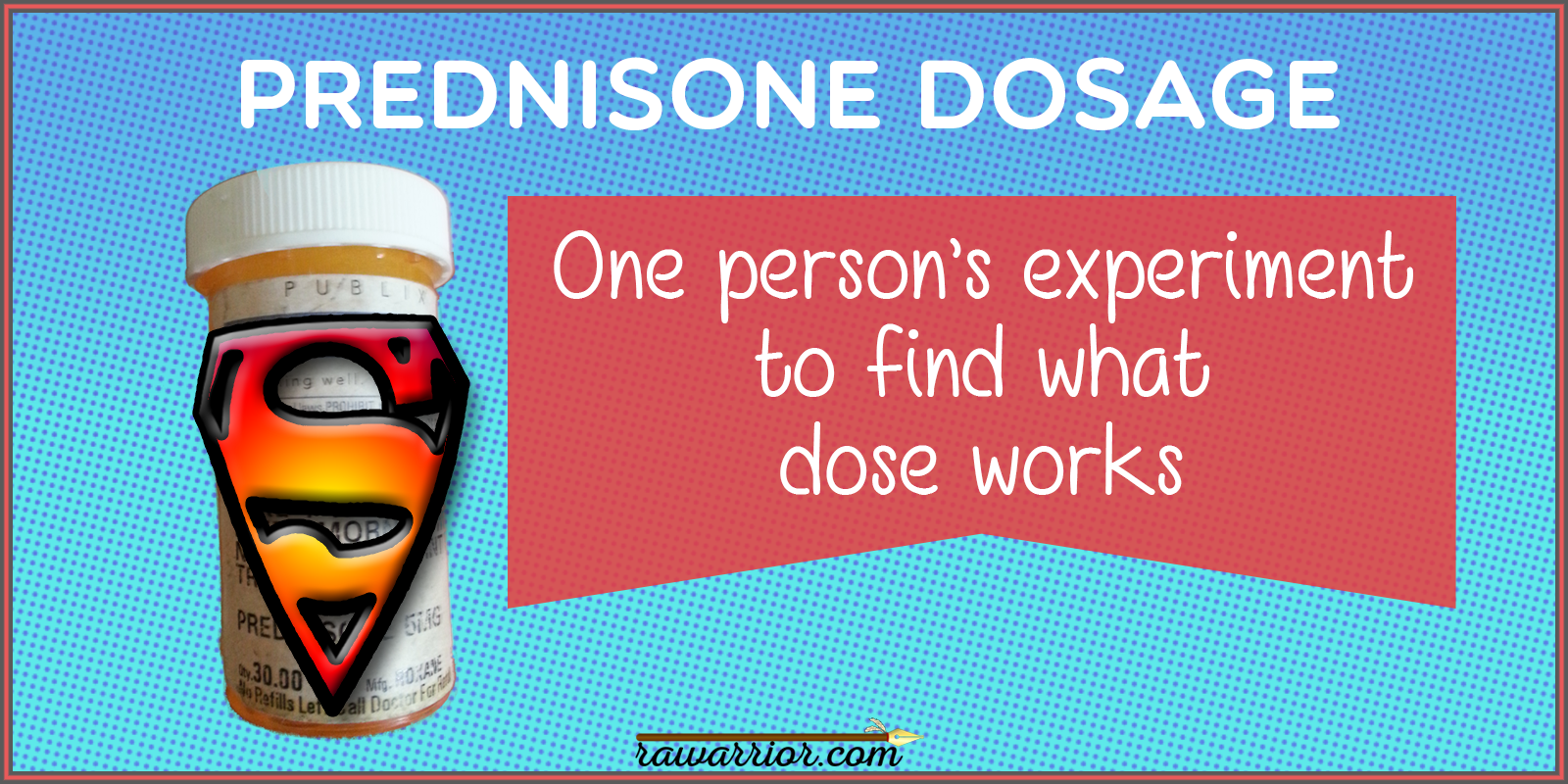 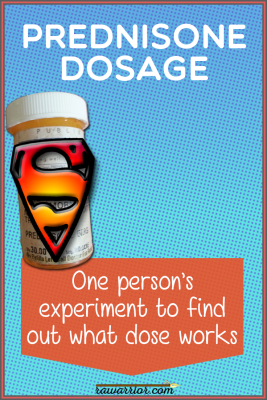 Last time we discussed the varying positive and negative effects of prednisone, and some strategies for finding a workable dose. Prednisone dosage varies significantly, from 5mg to 60mg, even for similar conditions. One reason for that is the varying response in patients. Doses vary because effectiveness and side effects vary significantly. I know one person who has intolerable side effects at 5mg, but others who have benefitted from 60mg doses.

A story in medical context is called a case study. This is not a thorough scientific case study, but I want to share what I learned from a personal experiment. I’m not suggesting whether you should try this at home.

Some of you may have read about that first bottle of prednisone I carried around for years. A nurse had given it to me to use in case of emergency: “In case things get really bad.” I already had trouble walking and couldn’t raise my arms, so I didn’t know what she meant by really bad.

The tablets were 5mg tablets. And if that emergency ever came, I was to take one. One. One 5mg tablet.

Imagine how powerful it must be.

About five years later, the day came when I swallowed this little white pill that terrified me. I had some emotional side effects, but didn’t notice anything else. It was disappointing because I really needed the help to be able to travel to represent patients.

For a while I thought prednisone just didn’t work on me. When I traveled, I took 15mg per day, and it helped a little. I read hundreds of comments from other people with rheumatoid disease (PRD) and noticed what doses people took. Once in a while I’d read someone saying that a higher dose of prednisone was needed for them to have a benefit.

So for years, I wondered in the back of my mind what it would be like if I took a high enough prednisone dosage for it to actually work on me the way other people describe medicines working.

Preparing to try another prednisone dosage

Not to interrupt the story, but remember at this point I’m still one of the 34% of PRD who aren’t responding to treatments. So 24/7 it stays about as bad as it can get. No days off for good behavior.

Anyway back to my secret experiment story. I wondered if I could create just one. One day off from full-blown hard-to-walk-to-the-bathroom RD.

Some of you are probably saying “Kelly, just do it already. Swallow a handful of pills and tell us what happens.” But you’re right, I’m cautious. All five of my babies were born at home because I like to do things the natural way. Not that I like pain, but I always thought that natural is safer and healthier. That first Dr. Laptop we met made it sound in my chart like I was flakey for asking whether I could get better instead of taking DMARDs.

For years I thought about when I’d try a higher dose. By now, I took 10-15mg per day. How many milligrams would it take to feel real relief? What would it be like to feel relief?

Would I ever be brave enough to try it?

If it worked, there are a lot of questions it would raise about my future. Would I be able to continue taking that amount so I could function again? Doesn’t this show that a disease treatment could someday be found for me?

After years of contemplating, the day came. It was about a year and a half ago. Roo and I were visiting my mother, and KB had left to visit her fiancée. I woke up and I could not move. How can I explain the difference between that day and others? I’d liken every day to being in labor with my five children – all very hard. But one was much worse than the others.

This was one of those days where it took an hour to lift my head to try to swallow my ibuprofen, but I couldn’t bend my elbow or pick up the glass.

KB was not there to help, and I needed to look after Roo. Somehow.

I knew this was the day.

I never took that ibuprofen. I struggled another half hour to be able to get the prednisone open and swallow it. Has your elbow has ever been frozen stiff? It’s hard to accommodate elbows when shoulders and neck are just as bad.

At first, I took 10mg. A few minutes later with a bite of protein bar I kept in my bedroom, I took 10 more. I was pretty anxious at that point. I hate swallowing pills. But I was fine.

Roo woke up soon and headed for the barn to help with the alpacas. I rested and hoped.

In a little while, I sipped coffee and worked on Roo’s breakfast. Silently I gave myself pep talks about increasing the prednisone dosage further. If this experiment were going to show me anything, I’d have to take at least 30mg. I had taken 20mg before and it helped, but only so much.

With lunch, I took another 10mg. Nothing terrible happened.

My pain and stiffness were gradually reduced and I was able to move around a lot more. I still had pain, but it was Little League pain compared to the Major League pain I’d been used to for 8 years.

The next morning was unusual. I was able to move as I awoke instead of pulling on myself for an hour to be able to sit up. Instead of my usual ibuprofen, I took 10mg of prednisone. At breakfast, another 10mg. At lunch, another 10mg.

The impact was so great that I felt my experiment with the prednisone dosage was complete. Now I just waited to see how good it got and how long it lasted.

I was amazed at how easy things are when it’s not a struggle to move. Getting dressed. Opening the dishwasher or the sliding glass door. Cleaning my teeth.

I thought of people who’ve written about responding to a treatment and getting right back to their lives. If the chains are lifted, PRD absolutely move on. Contrary to the secondary gain accusations, PRD do not want to stay down.

At one point that afternoon, I was reading something on my iPad and I easily held it in my hand so it was at a comfortable height for my neck. In an out-of-body experience, I observed myself. Look at her holding that iPad as if it’s not heavy!

Have you ever tried to explain to someone that things are heavy if you have RD? They say, “No, it’s not heavy,” as they hand you something you try not to drop.

Prednisone fixes this RD gravity problem. I have a good theory about why. That was a useful experiment.

“Happiness is the right prednisone dosage”

Of course being able to move freely was a strange experience.

At the same time, there was another thing happening that was just as strange. People around me had no idea, and I carefully observed how they responded, especially to things I usually wished I had help with.

For just one day, I had about 50% of the RD that I usually have. Part of me was elated. This is IT. This is what response to treatment feels like. I didn’t fail treatments; they failed me.

It was a happy confirmation.

But I was also sad. Not just because I knew my experiment would end. I was sad about the wall that I’ve written about for seven years. The wall keeps people from seeing RD as it is. Some doubt it can be that bad. Some are confused. But most just don’t know.

That day as I interacted with people it seemed like their understanding of my 50% reduced RD was just about right. I had a revelation. THIS is how they think RD is – this 50% improved version!

A lot of frustration of not being understood would vanish if I could live with this 50% improved RD. But of course the prednisone would wear off.

The third morning was not as bad as the first, but the relief of the second morning had gone. I noted details about how my joints reacted in the final phase of my experiment.

That day was like the first six months of my RD compressed into one day. I remember standing talking to my nieces and suddenly I gasped from a sharp pain in my ankle. Would you believe I actually thought, “What was that?” My brain had already adjusted to lower pain levels and assumed there was a fresh injury.

One by one the icepick stabbing pain returned to my joints.

Popping noises also surprised me over and over from unsuspecting joints who thought their nightmare had ended. From little finger joints to crunchy neck joints, it was a noisy day.

One by one, joints locked up. And pain returned.

As the chains tightened around my wrists, ankles, and knees, as it became more and more difficult to move. But for everyone around me, life went on as normal. People moved around freely, not asking whether I needed help.

This story is more than a case study of response to prednisone. It’s a study in understanding RD. Many PRD have experienced a response to treatment, at least for a time. So as I’ve pointed out many times, we with RD have lived on both sides of the fence. Therefore our descriptions of the experience of RD should be trusted. It should be relied on in research.

What PRD have discussed for years – maybe centuries – is that non-PRD (NPRD) have no way to relate to our experience. They cannot judge both sides if they have only visited one of them. I explain that walking on my RD ankles is like walking on sprained ankles, and then tell them to multiply that for many other joints. Unfortunately, that’s just too hard for most people to grasp.

READ MORE: Loaning out your RD for a day, for educational reasons

There are other implications from my experiment, including for “remaining pain” which I hope to write about soon.

Do have a medicine experiment story?

What has been your ideal prednisone dose?