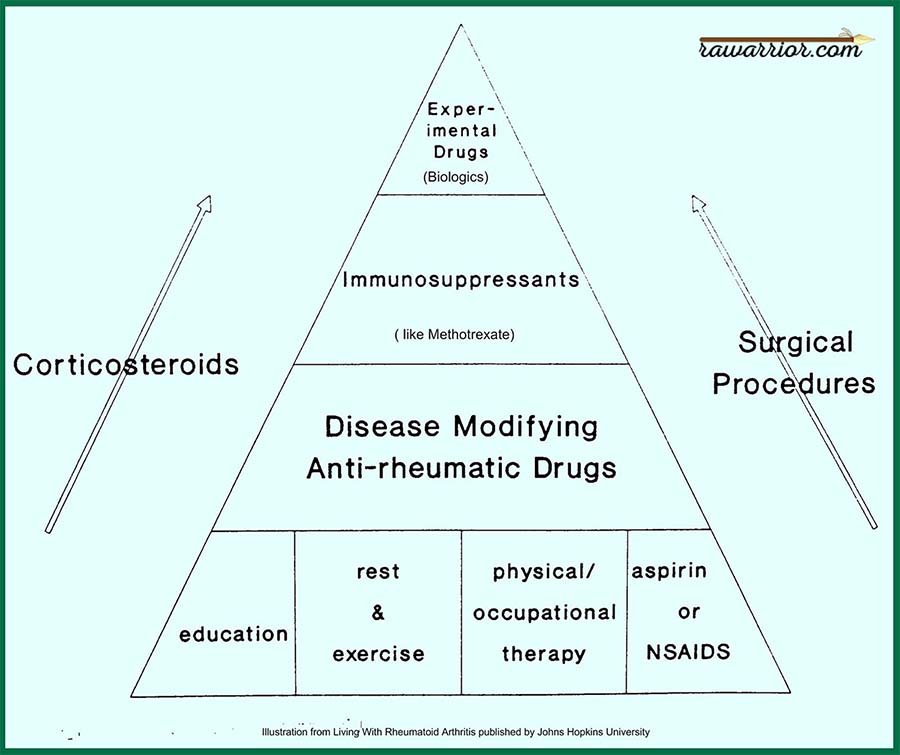 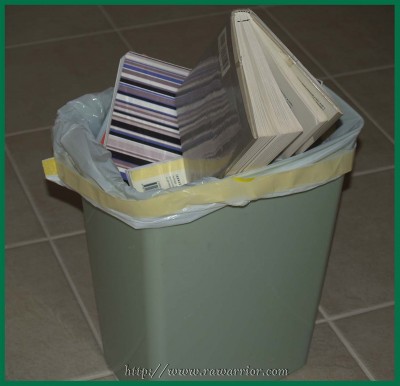 OOPS! If you’ve read many books or articles on the treatment of Rheumatoid Arthritis, you may have heard of the treatment pyramid. During past decades, this was the general treatment plan for all RA patients (regardless of disease course type).

Here’s a brief summary of what is was like to climb the old treatment pyramid:

If you have pain, you use otc NSAIDS. If it gets worse, and you have obvious inflammation, you use prescription NSAIDS. If you come back to the doc asking for something stronger, you get an actual steroid prescription. If you don’t get better after a couple of years, you get some kind of DMARD (disease modifying) prescription. Low dose. If you keep complaining, you may get to add a second DMARD. By now, you may have had a surgery and a steriod injection or two. If you are stubbornly not cured, you may end up eventually on a combination of DMARDS and NSAIDS which hold your symptoms at bay (called a season of remission) – except for when you flare. Of course, the newest medicine available at the top of the pyramid is a Biologic (read Enbrel, etc.) However, by that time, you have lots of irreversible damage.

I feel hopeless just reading that. Who could climb that pyramid without getting hurt?
That was then. 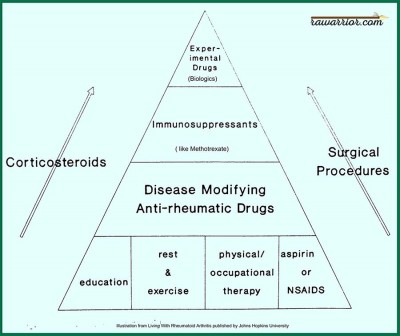 The pyramid has been scrapped! In recent years, the ACR (American College of Rheumatology) has begun to recommend inverting the pyramid. They realized that all that time RA patients were in pain, they were also suffering damage. Damage from day one!

Now they will use stronger medicines earlier in the course of the disease. And prescribing larger doses and more combinations is becoming the new standard treatment for Rheumatoid Arthritis. I call it the SURGE. (Think: war.)

The goal is to bring remission sooner and prevent more damage.

Some who have been sick with RA for decades have lived through all the changes. I lived through the same thing with Hashimoto’s disease (an autoimmune thyroid disease). During the 30 years that I have been diagnosed, they have thrown out the books twice – and rewritten them! Oops. That has had a big impact on the treatment that I am able to receive.

Of course, medicine is a practice and most doctors are practicing it the best that they can. But, they can’t learn to do any better if we just keep quiet about it. I want patients to be a part of this process as we continue to re-write the books.
Article on controlling RA
Oxford journal abstract
NIH abstract