Please read the first part of this blog: Rheumatoid Arthritis Doctors. That post discusses a story written by a young doctor who describes part of his training. If you read that post and others on the site, you know this is not an attack on good Rheumatoid Arthritis doctors. Those are the ones, like Doctor Conley, that we need more of.

Recently, a reader of my blog sent to me your article entitled Deep Waters. I read it through tears and decided to share it with several friends and ask whether they had the same reaction. They did.

Eventually, I wrote a blog introducing your article and recommending it to my readers. You can find my article at this link.  Your article raises several important points. I’d like to respond to a few that are particularly important to me, so I’m posting post this open letter to you on my website.

If I could, here’s some of the many questions I’d ask you about Rheumatoid Arthritis doctors…

Since you wrote this during the first year of practice, I wonder how the last several years of working with patients have affected your ideals. Have you been able to care for patients the way that you described in the article?

Do you think that rheumatology specialists are liable to rely more upon tests they consider objective such as radiographs and blood tests and less upon patients’ descriptions of symptoms due to the invisible nature of most Rheumatoid Arthritis symptoms?

Do you think it would be best if a patient who is interested in her own test results had access to that information directly so that valuable clinic time would not be wasted with patients trying to pry that information out of doctors? 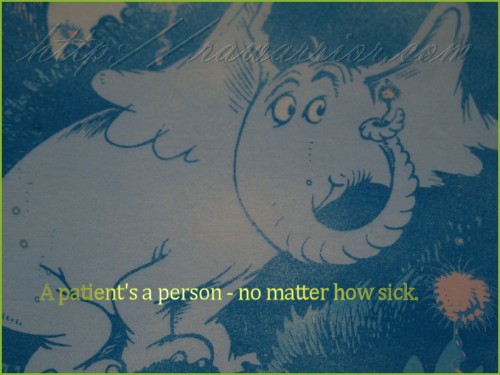 You described the patient in your story using words such as “furiously” and “obsessive.” Could your perception of her have been affected by the words and attitude of the man who you trusted as your guide?

Are rheumatologists trained to minimize medical situations with Rheumatoid Arthritis patients in an attempt to prevent patients from becoming anxious or behaving like the patient in your article? Could it be a tactic doctors use to extinguish the behavior?

Some of the many things I’d tell you about Rheumatoid Arthritis doctors, if I could…