RAW has 6 posts on musculoskeletal ultrasound over the past 4 years. There have been a flurry of publications on the topic since the last one, Ultrasound for Seeing Invisible Inflammation in Rheumatoid Patients, in December. There’s a lot to talk about, so today will be the first of a series. If you haven’t, this is also a good time to catch up on the topic by reading the earlier musculoskeletal ultrasound posts.

Why would musculoskeletal ultrasound matter to Rheumatoid Disease patients?

In Rheumatoid Arthritis Swelling, Take Two (2011), I told you about a study by Dr. A.K. Brown that showed 96% of people judged by rheumatologists to be in “clinical remission” actually showed disease activity when examined with expert ultrasound or MRI.[1] That study corroborated the comments of thousands of persons with Rheumatoid Disease (PRD) on this site: that they experience signs of disease activity even if external swelling is inconspicuous, such as the 460 of them here and here.

Donia: My mother (deceased now) and I both have severe rheumatoid arthritis. Mother’s hands were horribly painful. They were so misshapen they appeared to look like paws. Mother had gigantic lumps on her fingers and wrists. I have never had much visual swelling. By the time I would ice a painful joint and go to the doctor, they couldn’t detect any swelling and I would get dismissed with a shrug. Only on Xray, could you see my RH damage. It took me 15 years to get an accurate diagnosis because I didn’t have the classic swelling and lumps. I was so deformed and had had so many joint surgeries that I could hardly walk any longer. Still, no swelling to confirm the diagnosis until 2011!
Melissa: Wow!! I am dealing with this exact problem! I have recently had to switch Rheumy because of lack of insurance and in seeing her for the first time last week, she also suggested that there was no swelling, just be looking at the tops of my hands! I have all other symptoms and I have been on RA drugs for many years…Why are these doctors not taking us seriously?? Meanwhile, I am only on pain meds because this new doctor believes that since there is “no swelling” than I do not need any RA drugs!! What do I do??
Jenn: I am so grateful for this and your previous post about swelling as well as all the responses. I am a thin woman and I see swelling where others can’t. There are times I have to wear larger shoes or cannot wear my rings. I had an ah-ha moment as I was reading the responses. The increase of pressure marks in my skin (lines from my pillow case, marks from a pair of socks, bra strap dents, etc) ARE SIGNS OF SWELLING. There have been 3 days in the last 3 months where my husband has been able to visually see swelling (and I took photos), though he notices the pressure marks all the time. Having times when my fingers, wrists, feet, whatever are larger (read: without sausage look) is indicative of swelling due to my RA.

Read the words of Dr. Stephen Kelly at EULAR last month in Madrid: “‘You can see raging inflammation in joints that are not swollen or tender,’ he said in an interview. The discrepancy between clinical symptoms and the ultrasound appearance can be ‘surprising,’ said Dr. Kelly, a rheumatologist at Mile End Hospital in Barts Health NHS Trust in London” (reported in Rheumatology News [2] (emphasis added). It’s not so surprising to us. But RAW was pleased to see that the evidence is being pursued and discussed. Anyone reading a sample of those comments can see how sorely that evidence is needed (pun for fun). And there are indications that some experts are recognizing this:

1. Last year in D.C. at the ACR’s annual meeting, instruction was offered in ultrasound.
2. The presentation on ultrasound by Dr. Kelly was only one of those at EULAR this year.
3. Earlier in 2013, EULAR passed a list of 10 recommendations for imaging in Rheumatoid patients.[3]
4. The importance of MSUS is being investigated in young Rheumatoid patients (JRA / JA).
5. A recent systematic literature review on MSUS concluded: “PDUS (power Doppler ultrasound) has additional value to clinical examination both in improving early diagnosis of RA and establishing true RA remission.”[4] 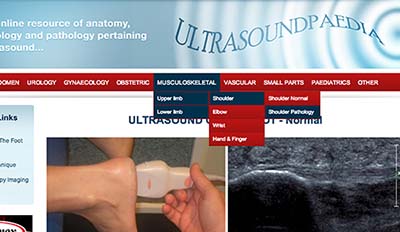 “Ultrasound” is used in several medical specialties. I’ve had one one of my thyroid, and one of Roo before he was born; and my bff had an ultrasound of her breasts a few years back. But ultrasound of the musculoskeletal system is hard to come by in the U.S.

1. Machines are an expense that practices do not have resources for right now.
2. Doctors have more than enough to do in the short appointments they have with PRD. Most of them are unaware of the impact MSUS could have on their patients.
3. But the biggest reason is lack of training in MSUS, so we’ll look at that next time. It’s tough to find a rheumatologist office that owns an ultrasound machine; and if you do, it’s likely she/he has only been taught to use it for guiding injections.

I can’t say it often enough: there is still so much to learn about RD. The duty of all in medicine is first to do no harm, and this is difficult with a disease that’s been such a mystery. But the situation should not continue the way it is – many patients are harmed by late diagnosis or refusal to treat because a doctor does not recognize that disease activity exists when they don’t detect what is (in their opinion) conspicuous swelling.

The picture: the blurry image is a foot ultrasound (public domain). You can view much clearer ones at Ultrasoundpaedia where ultrasound methods are outlined. I’d love to show this site to the docs who’ve told me there’s no such animal as MSUS.