I got an email recently from a rheumatology magazine with a sensational headline about “exercise and Rheumatoid Arthritis.” The article linked to is a year old, but some of our doctors read these emails. And the public also gets confused by ridiculous headlines like “Nearly Half of RA Patients Are Sedentary. Here’s Why.” So, we’ll revisit the issue of “Rheumatoid arthritis and exercise.” Note that I’ll not restate every major argument or reuse every valuable resource on the subject; please click here to read all posts on “exercise with Rheumatoid Arthritis.”

What they think of why “Rheumatoid Arthritis patients won’t exercise”

“(R)egular physical activity has replaced bed rest as the recommended response to the stiffness and pain of rheumatoid arthritis (RA). But many patients who have RA do not really believe this, according to a recent study. Lack of conviction and motivation, not pain or mood, appear to be the major factors that deter nearly half of RA patients from moving about enough to help their situation,” Musculoskeletal Network.

Why are articles on Rheumatoid disease and exercise couched in this way? Asserting exercise benefits all Rheumatoid patients, but that patients just refuse to accept that “fact.” Look carefully at the quote above: however wrong the author’s assertion is on exercise, he’s correct on one fact: Most Rheumatoid patients do not believe exercise will improve their RA.

Let it be acknowledged that exercise correlates with better-controlled disease, but where is the proof that exercise improved disease in those patients? Isn’t it more logical to assume that patients with more ability to exercise do so?

Why is there such a grave misunderstanding of Rheumatoid Arthritis patients’ position on the issue of exercise anyway?

BECAUSE THEY DO NOT UNDERSTAND WHAT IT IS LIKE TO LIVE WITH RHEUMATOID DISEASE.

They do not recognize that when the disease is moderately to severely active, disease activity increases with physical activity. This is a rule that patients call the Usage Principle. (Yes, I invented the term a few years ago because rheumatology doesn’t have a word for a notion they do not know about or study.) This is not universal, but it is a key factor to understanding active disease, sometimes called “flare.”

From years ago when a patient told me she does impossible chores like washing dishes and pulling weeds before seeing her rheumatologist so that he will see swelling in her hands to the 2011 RPF poll of patients showing nearly 70% say physical activity consistently increases their joint pain, we know the Usage Principle reigns for a majority of Rheumatoid patients. Other than drugs, rest is the way to quiet “flare.”

It is well documented that doctors consistently rate disease activity lower than patients do and often fail to understand the scope of joint disease activity, limiting it to “swelling” and “pain.”

3) Dissociation between swelling and disease activity

Inflammatory disease activity has been proven in a majority of Rheumatoid patients who were labeled as “in remission” due to lack of conspicuous swelling.

4) Disease activity is not measured anyway 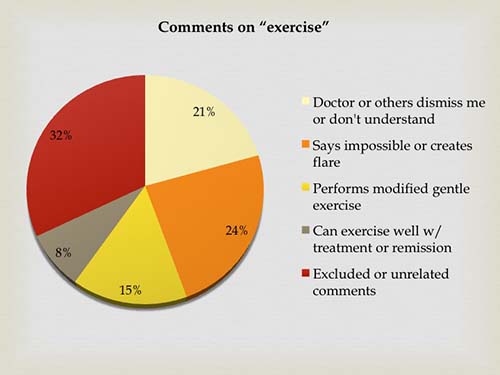 What are Rheumatoid Arthritis patients’ actual views on exercise?

Two days ago, a patient commented:

I was diagnosed three years ago and from then on, i have had fever and pain every day of my life! Everyone says, “You should exercise more, eat less, go on as before and so forth. it truly feels as though no one understands me. Every time i try to exercise, i am in pain for a week afterwards. I can’t even go swimming, because my shoulders and feet feel like they are falling off! My feet are the worst, my doctors have already fused 8 of my toes, by removing the joint completely. That was three months ago, the RA is eating through the newly grown bones and my toes are going in all directions again! Do people really expect me to exercise?

There are nearly 22,000 public comments on this site and many times that in social media. I spent time studying all 472 comments on this site that mentioned the word “exercise.” Obviously, I did not find every reference since there are many related words such as “workout” that I did not search. Also, I acknowledge that this is not a scientific sample since patients self-selected by commenting on this topic.

All comments were divided into the 8 categories described. I classified each comment based upon key phrases and did not count any comment twice. It is impossible to qualify each comment such as some saying that the patient takes prednisone or “lots of pain meds so I can exercise.” 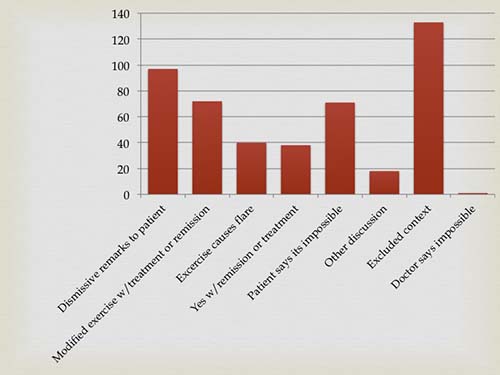 Do you think the experts understand patient opinions on exercise?

Do you think they understand the way the disease behaves in patients?

Can you exercise the way you want to?

Edit 11:35 a.m.: This issue is difficult to cover in one post. I regret not restating my mantra with regard to exercise and Rheumatoid disease: If you can do, if you can’t don’t. And to investigators my message: It seems the evidence in our community shows that those who can do, and those who can’t don’t. Let’s do some comparative studies with regard to other illnesses; and let’s not have more of these exercise studies without taking into account the functional status of the patients in question.

Postblog: It’s been over a year since I addressed this topic that the media pushes regularly against Rheumatoid patients. This is only the 6th post on this site specifically on exercise of 700+ articles over nearly four years. These are the only articles I’ve read anywhere on the topic of Rheumatoid disease and exercise that even begin to consider that patients are not either simply lazy or misguided.

87 thoughts on “Sensational Headlines on Rheumatoid Arthritis & Exercise, Round 6”