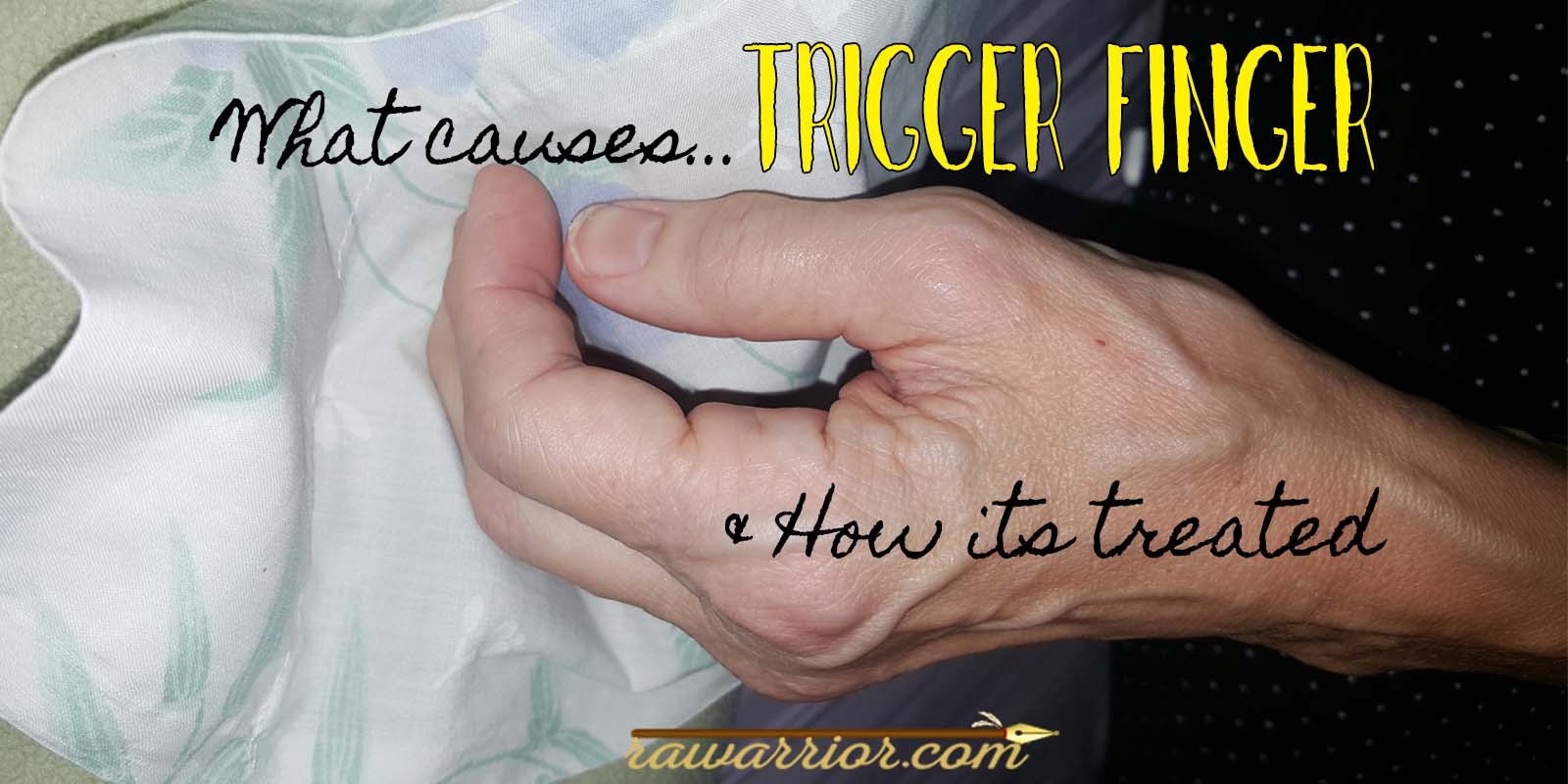 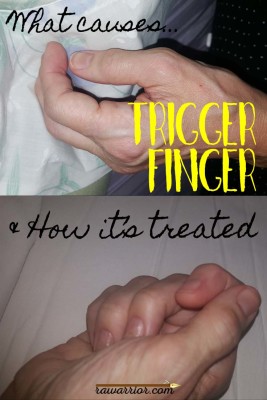 Trigger finger in rheumatoid arthritis (RA) is a common visible effect of the disease. Fingers, to varying degrees, become stuck in a bent position, as in pulling a trigger. The joints are not actually fused when this occurs. But the tendons get caught in a tendon sheath (or pulley) due to swelling or nodules that inhibit movement.

Inflammation of the synovial membrane around the tendon is called tenosynovitis. Trigger finger is sometimes referred to as stenosing tenosynovitis.

If you are a person living with rheumatoid disease (PRD), you have probably noticed joints catching or resisting movement, and possibly had it explained away as just “RA stiffness.” But the cause of RD /RA stiffness is not known, and it is likely related to tenosynovitis. My occupational therapist explained the progression of stiffness to me recently, as she worked to increase my elbows’ range of motion: the soft connective tissues swell and can gradually stiffen, then eventually become firmer, limiting movement and finally preventing it.

The American Society for Surgery of the Hand (ASSH) has good images explaining a normal pulley and tendon in a finger, and what happens when the tendon cannot glide through the pulley.

However, if the problem persists, as it can when RD / RA is very active, then trigger finger surgery can be an option to release the tendon. Of course trigger finger can occur in people who do not have RD / RA since inflammation can be related to other causes such as over-use.

As I’ve explained before, we’ve learned in working with many thousands of patients, that rheumatoid disease doesn’t necessarily strike the hands first. However it does seem to always eventually target hands. Like the cervical spine, hands are affected because the joints are small and they are most frequently moved.

With trigger finger, tendons get caught in their pulleys due to swelling or nodules #rheum Click To Tweet

My first trigger finger occurred nine years after diagnosis, in early November 2015, immediately after I had been scribbling many notes to my attorney during a long day in court. Actually I can tie every progression of my disease to specific events of joint use or injury / trauma. During the couple weeks after that court date, I took videos in the early morning with my phone because I was amazed that my finger now had a mind of its own.

As with every other symptom of my disease, it spread – to other fingers. This “spreading” and symmetry is part of what makes rheumatoid disease unique. There is a mistake in the immune signals that communicate about the injury to other parts of the body.

I’ve had countless injections for trigger finger – I have actually lost count. To make this report complete, I will share with you two things.

1) Trigger finger hurts. My finger joints hurt. The injections hurt. And trying to force my fingers straight, which sometimes works and sometimes not, hurts. A lot.

2) People, even good doctors, seem oblivious to trigger finger, as with many aspects of RD. In the past year, while I’ve lived with ten trigger fingers, yes all 8 fingers and both thumbs, I’ve had two doctors say about my RD: “But you can still make a fist, right?” So, I wake up every morning with my hands in fists that won’t open, which means I have spent half of the last year with my hands stuck in fists – and I still get the same dismissive question that is supposed to prove I’m doing fine: But you can still make a fist, right?

HAVE YOU SEEN TRIGGER FINGER IN YOURSELF OR ANOTHER PERSON WITH RA /RD?

IS STIFFENING OF SOFT CONNECTIVE TISSUES LIKE TENDONS A PROBLEM IN RA / RD?

Note on the great Dartmouth video: Dr. Kerrigan uses the term “tendonitis” in the video in 2009. However in recent years the more common term is “tenosynovitis,” because a distinction can be made between inflammation of the tendon itself or the thin synovial membrane around it as is common in RA / RD.

Tendons are the cause of much early stiffness, pain, and disability in RA / RD #rheum Click To Tweet