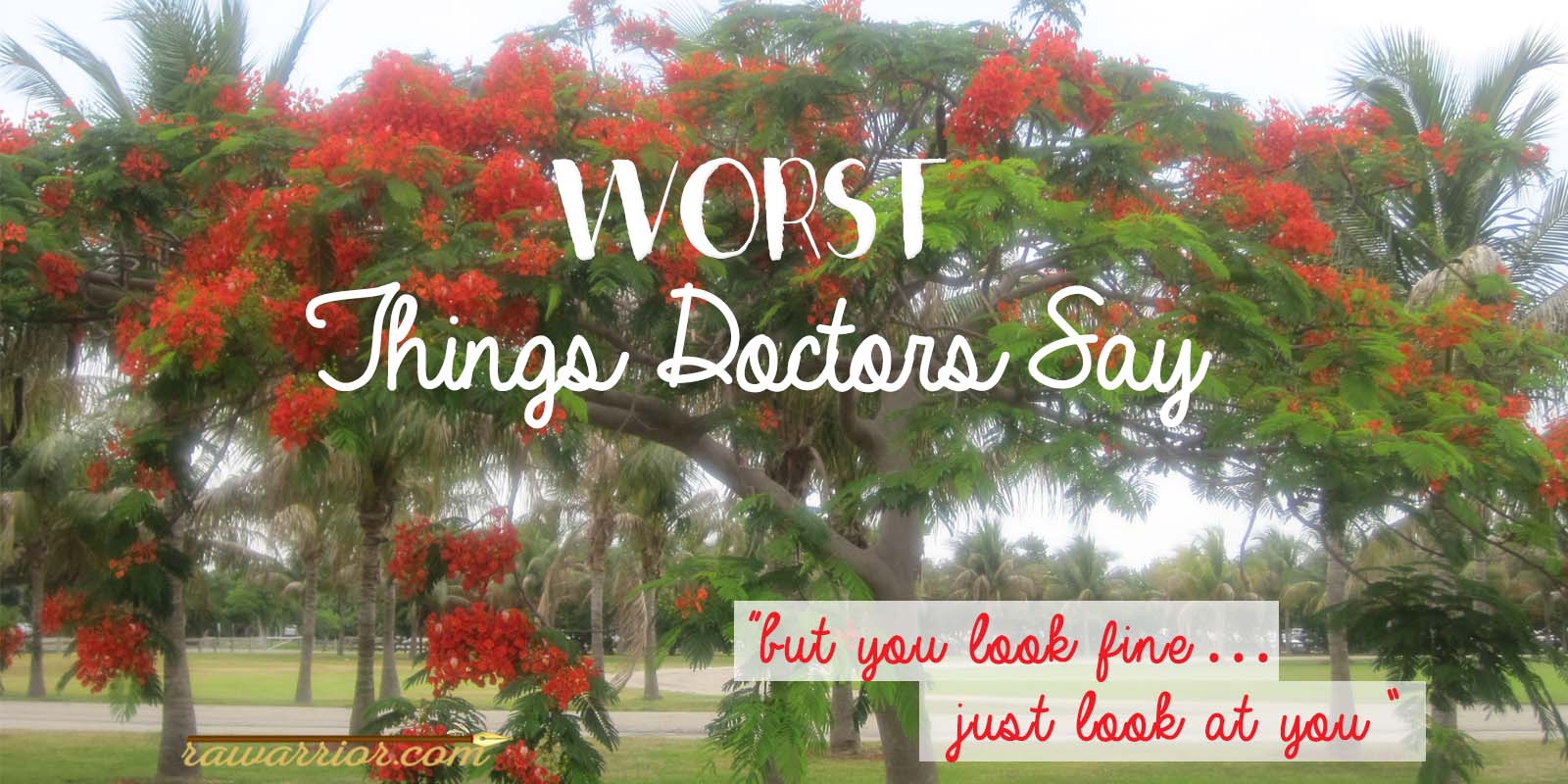 Telling my secrets on the worst things doctors say

Why bother to talk about it, Kelly? First of all, patients already talk about it in the comments on RAW, as you’ll see below. Also, we are in the midst of a slow cultural shift that rejects the dismissive paternalism that has been typical in medicine. Recently, the British Medical Journal started a discussion on which phrases used in medicine annoy patients, like saying “complaints” to describe symptoms or “denies” as in “denies smoking,” instead of does not smoke.

BMJ also hosted a Twitter chat where people shared some of the worst things doctors say or write in charts about patients. And the tweets are captured on Storify by @SusannahFox.

Worst things doctors say to me

Here are 10 worst things doctors say (that I’ve heard) and below are 10 more from the thousands on RAW.

1. “Well you can still put your bra on” to prove that my shoulders are not much affected by RA. Actually, I was never asked how I get dressed or what help need. For the record, no, I cannot reach my bra snap behind me.
2. “No disease does this,” a doctor told my husband to prove that I was inventing my joint pain. He refused to run blood tests for RA.
3. “Everyone’s anti-CCP is that high” to prove that I do not need to be treated for RA, with suggestion that I should just be treated for fibromyalgia.
4. No damage, no treatment: “You don’t need to take these toxic medicines because you don’t have any damage yet,” insisting that I stop taking methotrexate after 7 years because a new x-ray of a foot differed from a previous x-ray finding of erosion.
5. “Ultrasound only works on the MCP joints” (knuckles), when I inquired about using musculoskeletal ultrasound to verify disease activity in my feet because external swelling was minimal.
6. “There are a lot of false positive anti-CCP tests,” said Dr. No as he told me he didn’t believe me that I had RA although he never examined me or read my chart. Actually, there are not; anti-CCP is about 98% specific to RA / rheumatoid disease.
7. “You said you just hurt everywhere,” said Dr. Space Heater to prove my symptoms are not from RA. We said, “No, I said, every joint is affected.” And they are.
8. “Why do that? We might as well x-ray your whole body! You have a systemic disease!” when I inquired about getting an x-ray of my worst joint, a shoulder. After two years of treatment, I’d had no x-rays at all.
9. “If I ever got RA, I’d cure it in 2 months with Humira and methotrexate” said to a colleague and me, at the American College of Rheumatology annual scientific meeting.
10. “I don’t give steroids to patients because it’s just a mask. It’s not real.” Told to us by a doctor using hair color, manicured nails, and cosmetic surgery.

What’s the worst thing doctors say? “Well you can still put your bra on” #meded #rheum Click To Tweet

WHAT DO YOU THINK IS THE WORST THING DOCTORS SAY?

POSTBLOG: If you want to share about an amazing rheumatologist, please leave his or her name in the comments section for consideration to be added to our Recommended Docs list under construction. One of the things RAW has done since 2009 is partner with awesome doctors and promote their work. There are features and interviews of good docs here on RAW and on the Rheumatoid Patient Foundation’s site, rheum4us.org.