We Got Robbed Yesterday | Rheumatoid Arthritis Warrior
Other
February 26, 2012May 15, 2018 Kelly O'Neill 40 Comments Living with chronic illness like RA 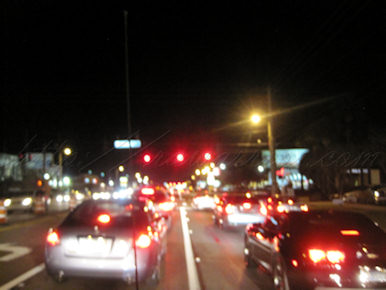 The NBA All-Star games came to the Amway center in Orlando yesterday. And the Daytona 500 events have been going on all week in Central Florida. Plus antique car shows and other things.

Saturday morning I was listening to the radio blowing out my hair (a big deal for me even with meds). I heard about traffic being bad from so many events including some financial conference. The host said, “It’s so exciting to have Orlando be like LA for the weekend.” Maybe too much so.

I underestimated the effect the traffic would have across the whole city so I was stuck sitting still in my Suburban on East Colonial for about half an hour. So, we were 25 minutes late to the meet-up we had planned and several folks went home. Discouraged but still hungry, I decided we should get lunch and wait to see if anyone else arrived. I kept saying we’ll have a good day if we visit with even one person. Eventually there were four of us talking intensely in an almost empty restaurant.

Feeling chilly, I suggested Katie Beth buy us some coffee – with my credit card of course. When she could not find my wallet, I reviewed the last five minutes carefully and realized when I had been robbed as someone bumped my purse. Then store manager remembered how suspiciously the four big guys had acted, leaving suddenly after buying only one sandwich dine-in sandwich.

The police had to navigate the same traffic we did – the ones who weren’t already occupied with Jeremy Lin being here – so I had to wait half hour for an officer to arrive. Meanwhile, I called my banks and learned where the robbers were using my credit cards to buy thousands of dollars of electronics and gift cards – like right across the street at Target. The female officer was apologetic, sympathetic, and smart. Our new friends were a big help too.

The police followed the thieves over the next couple of hours as my banks reported to me where each card was swiped and we were able to get a good bit of evidence. If I can acquire use of the photographs of all four men and their female accomplice, I’ll post them online for the world to see. Maybe we can do even more to help catch these thugs who think they need their sleazy lifestyle more than my kids need their mom to be able to buy groceries.

When we finally pulled out of the shopping center last evening, we saw another female police officer trying to break up a brawl between two women in the parking lot. We steered around a fender bender where a crowd was gathering. In the next five minutes as we headed out of town, we encountered no less than 15 police cars with lights flashing, heading in various directions for assorted emergencies. I visited LA once, but it was a sunny morning and nothing like this.

I was on the phone for hours with my banks and the Bluetooth wasn’t working right so my hands are particularly angry today. I think they thought they deserved a restful day after the blow drying. But I had a phone to each ear several times yesterday and my hands HATE phones.

You never know what a day will bring. Or a life, right? Nothing about my life now is the way I expected it to be. But we find a way to face what comes today and look forward to tomorrow being better. Friends who care and peace from God help me – I hope you have them when you need them too.

NOTE: Are you signed up for my newsletter which is different from receiving the regular daily blogs in your email? Click here to sign up now so you won’t miss anything.

40 thoughts on “We Got Robbed Yesterday”