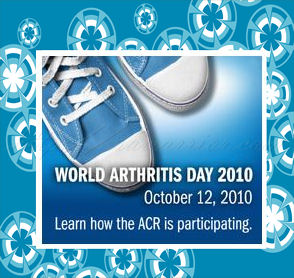 Last week, I was on the website for the American College of Rheumatology (ACR) gathering details to prepare for my trip to ACR’s annual Scientific Meeting in November. I saw this exciting little badge with blue sneakers. It was an ad for World Arthritis Day. It said, “Learn how the ACR is participating.” I wondered how? So I clicked.

There is a video public service announcement (PSA) about arthritis (aka osteoarthritis). There are a couple of links. Then the page ends this way: “You may need to see a rheumatologist to treat your osteoarthritis. The ACR offers a directory you can use to search for a rheumatologist based on where you live. Find a Rheumatologist. Osteoarthritis, the most common type of arthritis, currently affects nearly 27 million people in the United States. But there are simple steps everyone can take to prevent and decrease the pain and disability of OA.”

There was nothing there about RA. I kept asking myself whether I was surprised. I’m still conflicted. 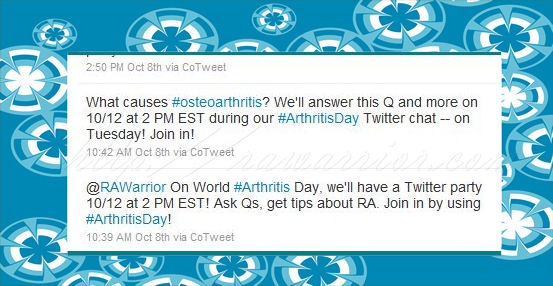 Why aren’t they asking OA blogs to promote it? Are there any OA blogs?

Rheumatoid disease does not require the word “arthritis”

If you‘ve been following the recent discussions about RA Awareness here on the blog, you’ve heard the outcry to change the name of the disease often called Rheumatoid Arthritis, in the U.S., anyway. Changing the name is not an original idea. For a long time, I answered people, “That’s a nice goal, but we probably won’t see that happen.” This last week, in our first RA Meme, people declared over and over that they want the world to know that “RA is not arthritis.” I no longer believe that changing the wording is impossible. I think it is a matter of time.

My smart rheum doc, the one I talked about in my recent video, has never used the “a” word (arthritis) in my presence. Doc calls it “the Rheumatoid.” My daughter was researching for a college project and she ran across numerous academic links which simply said “Rheumatoid Disease” instead of Rheumatoid Arthritis. It was fun to tell her, “Yes! I told you so.” Come to think of it, no rheumatologist I’ve ever been to has used the “a” word in front of me. The docs don’t seem like they are devoted to “arthritis” as the name for rheumatoid autoimmune disease. Their website links about World Arthritis Day seem to reflect that.

58 thoughts on “What Does World Arthritis Day Have to Do with RA?”