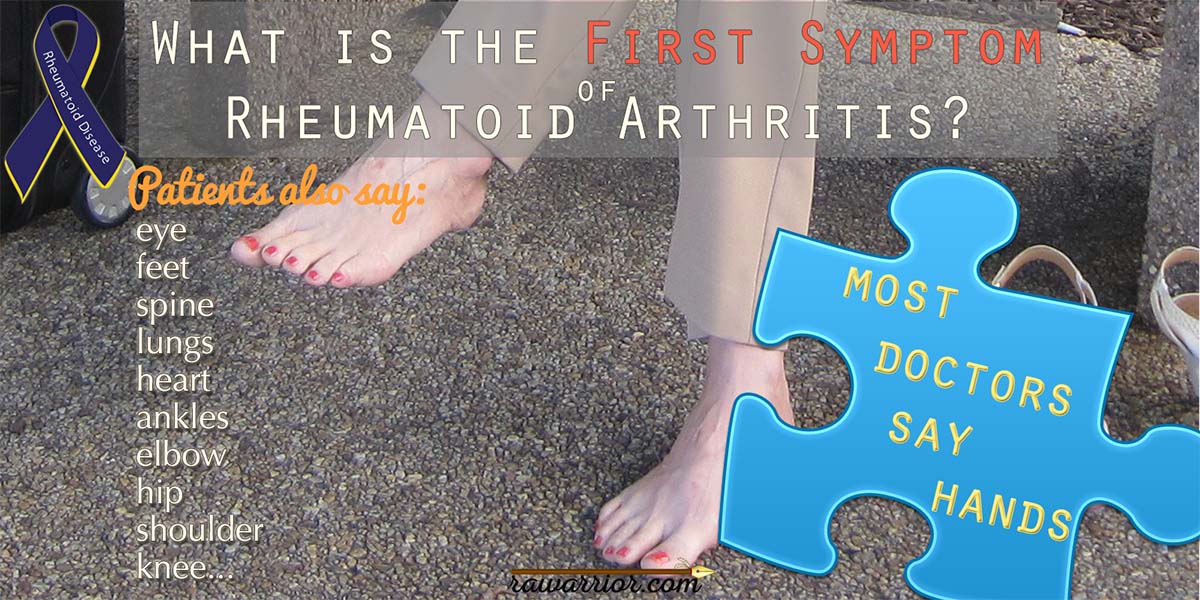 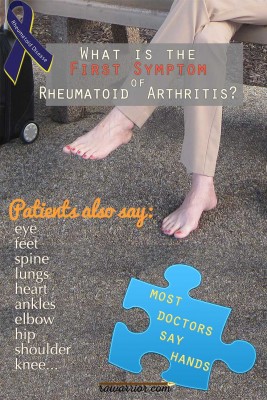 Do people with Rheumatoid Disease (PRD) have the symptoms they’re expected to?

Many researchers and doctors consider RA to be primarily a disease of the hands and wrists. Other small joints can be affected, they say, but hands are first. According to PRD, many doctors examine hands to diagnose as well as to judge disease activity.

Is that an accurate description of the first symptom of rheumatoid arthritis?

How do I know? I know because I’ve gained a broader perspective by reading many thorough articles on diagnosing RA like this one. Also, I’ve spent even more time reading the accounts of actual people with Rheumatoid Arthritis. Many PRD do not experience symptoms in the hands early in the progression of their disease. In some cases, those PRD are not following the pattern which is set forth by those who officially authorize and certify a “definition” of Rheumatoid Arthritis. This is can make diagnosis difficult.

Here is a first symptom of rheumatoid arthritis list that I compiled after talking with real people being treated for RA: 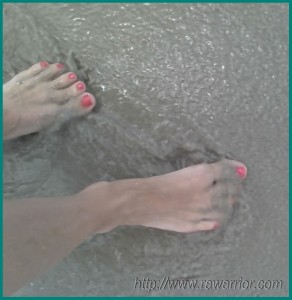 I am one of those lucky peeps whose Rheumatoid Arthritis struck my feet before my hands. The pain began at age 15. The occasional pain or swelling got worse over the years.

Early in 2006, there was intense swelling and pain which caused deformity literally overnight. One morning, I awoke with a toe that had moved about 45 degrees. I could not walk on it. Within 24 hours, the other foot did the same thing. At least they matched.

Within a few days, RA attacked several joints on both feet so that I could not wear shoes. It felt as if I were standing on rocks all of the time. It took a few doctors to realize that this was actually RA. In fact, I was not diagnosed until it had spread to several other joints. Incidentally, that did not include the hands at that point.

Since I did not realize the seriousness of my fate, I never took pictures of those unbelievably deformed feet. Fortunately for me, the swelling went down and I can walk short distances now with only moderate pain. However, I have a completely different pair of feet. RA feet.

Updating this now in 2016, I’ve had many injections over the years in my feet to bring down the extreme inflammation. I still see the same podiatrist who splinted my feet 10 years ago to help the joints come back in line. He helped diagnose my RA. The lumps beneath the base of the toes are always there, but ice packs help somewhat.

IF YOU ARE a PATIENT –

Please add your comment below to tell us about your first symptom of rheumatoid arthritis. Or you can answer for someone you know who has RA.

IF YOU ARE a DOCTOR or NURSE –

Please read through the hundreds of comments by patients to see the wide variety of first symptoms.

919 thoughts on “What Is the First Symptom of Rheumatoid Arthritis?”