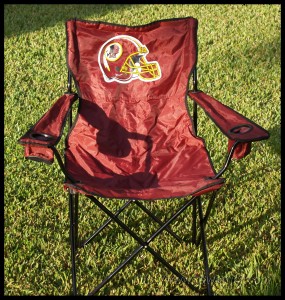 From my side of the field: the game with Rheumatoid Arthritis symptoms

Football fans measure time by season: the regular season, the pre-season, and the post season. We hate to acknowledge that there is a fourth season to every year: the off season. That’s the season without football.

This fall is no typical football season. This year, my own sons are finally playing on a Pop Warner “tackle” team. For years, they have dreamed of this day.

I was almost as excited as they were. Somehow, I still forget about how Rheumatoid Arthritis might affect things. I did not think once about how hard it would be to keep up.

No, they haven’t asked me to play offensive line. Only to drive to practice. And wash the uniforms at night. And stand on the sidelines. And send brownies to the concession. And produce a bi-weekly report card. No big deal, honestly.

When I parked the ‘Burban on Saturday in the far lot, we unloaded the chairs we had made such an effort to remember. It was a 10 minute walk to the closest end zone. Because of my hip pain, we stopped there and set up the chairs on the 2 yard line. From there, we could barely see that there WAS a game going on.

I really needed to sit down. But, I was really trying to see my son. So, I stood. By halftime, I was wondering whether I would be able to walk back to the car.

I have been stranded before. I have had to sit on the floor in Target for a little while. More than once. That makes malls a little scary.

I didn’t want to get stranded in 98 degrees with a four year old and our travel companion, the flu. So, I did something I thought I’d never do. I left the field in the middle of a game.

By the start of the second half, my hips and knees were screaming. Why am I the only one who can hear them? I had to surrender.

I started the journey back through the crowd, past the concessions, across one parking area toward the far lot where my ‘Burban waited. The boys were not as disappointed as I was. They won’t be putting me on injured reserve. I’ll be back next week. We have waited too long for the regular season. Thank God a mom can’t get traded to another team.