What would a lunar eclipse on the solstice be without my beloved camera? 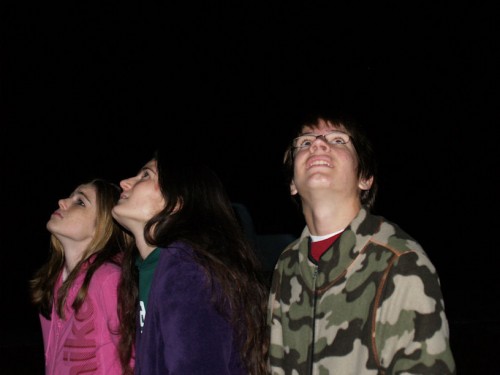 I pulled my thickest Redskins blanket over my head and went to sleep on the sofa with all of the lights on. The lunar eclipse on the winter solstice was a once in a lifetime event I would surely not miss. When I heard Mary Khris call out to her sister, I grabbed my camera and headed out into the chill in my pajamas.

The air was perfectly clear. The moon and stars were brighter than ever on the Space Coast. Orion was larger than we’ve ever seen it. If the view was a Christmas card from the universe, the meteors were added glitter.

I raised my kids to always look up. If I made my own bumper sticker, it might say, “We brake for rainbows.” Whether it’s flight or God’s creation, the sky is the most popular subject for my cameras except for my kids.

The camera cannot capture the electrifying thrill of the lunar eclipse or a Space Shuttle launch at my house. And there is something else it missed. This lens that’s so great for football is not meant for space so there is no record of the red moon we saw. As the silver sliver got smaller, I had to force the “shutter” to stay open longer. But there was no way to capture any of the lunar eclipse after it got small enough that my camera started lying to me.

My camera said, “There’s nothing there” and refused to shoot. If I forced it to take the shot, it said, “See, I told you there was nothing there.” Don’t you love technology with personality?

Of course there are more appropriate cameras and lenses for shooting a lunar eclipse, much less a meteor shower. Yet, something haunted me about this after I finally went to bed this morning. I kept thinking about what it would mean to have the right camera for RA. In some ways, we are barely out of the “earth is flat” stage with RA. The only ones who know what RA is really like are those who live with it – either in their bodies or as faithful caregivers.

Like the red moon of a lunar eclipse, RA may be where a camera can’t find it

Disease activity is mostly invisible. There had been hope that the Rheumatoid factor would become a tool like measuring insulin for Diabetes. But the Rheumatoid factor is so unreliable, a doctor recently said to me, “No one cares about the Rf anymore.” There was brief hope that ultrasound for RA would become a reliable tool to see RA. That hope is pretty dim. Many doctors now claim the CRP has that significance. They are mistaken.

Technology falls short with RA. For now. I’ve heard some doctors and researchers admit we don’t know what causes RA or even exactly what it is yet. I’ve brought my readers reports of the most accurate method we have for measuring RA, which happens to be patient generated data (patient questionnaires).

If you want reliable physical evidence of Rheumatoid Arthritis, we have nothing to look at but the wake RA creates. That means the high rate of disability …or autopsies showing evidence of its effect on the spine, the larynx, and the heart in most patients. Until there is a better RA “camera,” we will have to take the word of those who know. If you want to know whether the moon was red last night, you will have to ask those of us who saw the moon turn red whether our cameras agreed or not.