My polite warning: this post is about the author.

I went for my third Actemra IV today. Easy peasy. The head nurse does a great job. No pain. No blood.

The first Actemra IV, she told me stories of patients who were helped by Actemra during their first 5 days! It gave me a hope. The second IV, she said she knew several patients who improved with their second IV. What a relief that was. Guess what she told me today?

Yep. “Lots of patients find the third Actemra treatment is what made it kick in.” Now, I’m sure she’s trying to encourage me. Sweet.

Then she asked what kind of news I have. I told her about planning my itinerary for the ACR meeting in Atlanta. She was thrilled. 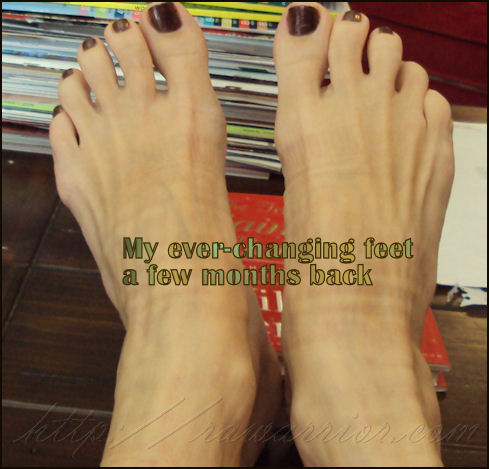 If you read my story on e-Patients.net this week, you know how much I hate to be a patient. I hate taking medicine and I hate people thinking of me as a sick person. I want to go back to being the Little Red Hen, doing it all by myself. I want to write about happy topics like how to carve a pumpkin and what to cook with it afterwards.

Tonight, I was realizing that it would even be hard for me to believe if I didn’t actually live this. I advocate that the doctors and the researchers ought to believe the patients about the pain, but I acknowledge it’s hard to imagine it. I hear my own voice trying to tell my daughter where it hurts and I think I sound crazy. If you think that stuff sounds crazy too, you might want to skip the next paragraph.

I keep thinking that RA has taught me about every joint in my body. And then it shows me more. The latest joints are in my feet just below the ankles. Apparently, it’s the Lis franc joint at the top of the tarsal bone, also called the tarsometatarsal joint. My fifth ones are hurting and swelling on the outsides of the feet and the ones on top are aching. Almost every joint that I can find on my body is tender if it’s touched or used. I bump into myself by accident and wince. Many of them send out angry stabbing cries even when I respect their privacy and leave them alone. Most days, at least 20 joints hurt at once. These have been bad days recently where it’s closer to 30. That’s enough to require a crowd permit.

I’ve spent this week on the phone trying to figure out why I have so many medical bills. It seems my medical insurance company has started over this month with a new deductible. It wasn’t enough that we began paying for coverage in March, but it was two months before we had ID cards or numbers so we could make any appointments. They delayed the start of my Actemra for weeks. Nope, not enough. The deductible starts over after only four months? RA is an expensive hobby. I could have taken that long awaited vacation or helped buy my daughter a car.

But the ugliest thing this week on the phone was while trying to get a pre-approval for regular lipid screenings while on Actemra. (I discussed this in my last video in case you haven’t seen it.) The woman was ugly to me during the 80 minute phone call. She was snarky about the cost of my many claims. She emphasized the price of the chemo IV (Actemra). I told her I knew the lipid test was cheap at a cash clinic, but expensive through insurance. She said a medical committee would look at the claim after the fact to decide whether it was medically necessary. She wanted my diagnosis code. I gave it to her from the lab order. She said, “Oh, it’s arthritis.”

“That’s what your diagnosis code says you have,” she said.

“I guess we need to change that,” I told her.

Do people who have no idea what RA is or what treatments are required hold the purse strings of health care through insurance companies (or governments)? What would be the difference if there were real awareness about RA?

I guess I’ll go to that cheap cash clinic on Friday. I think my health is worth the 15 bucks. But I’m not going to quit thinking about what needs to change.

52 thoughts on “Would RA Awareness Make a Difference? The Good, the Bad, and the Ugly”