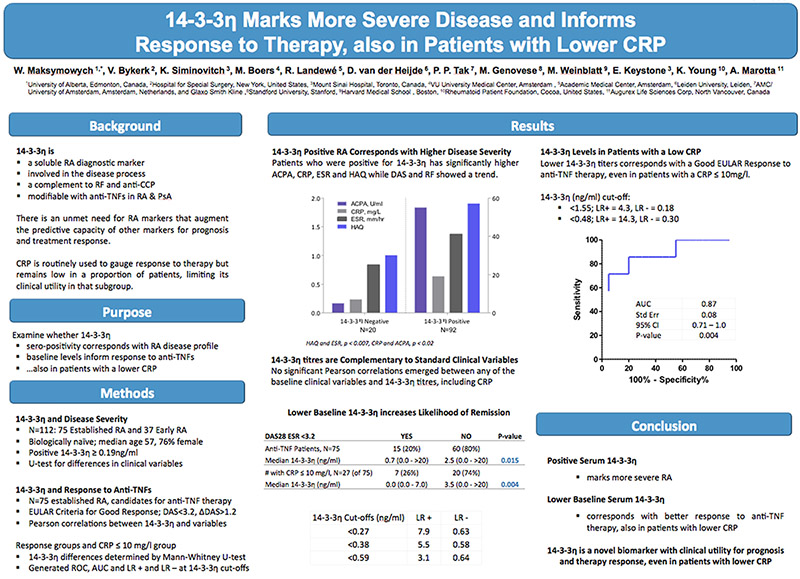 The quest for Rheumatoid Arthritis tests

Almost four years ago I wrote my first post on Rheumatoid Arthritis tests. This is the 29th. Obviously, tests are a key topic in RA diagnosis and disease assessment. Many still ask about “the RA test” which doesn’t actually exist. Several tests are used to inform about Rheumatoid Disease, but none is a dependable indicator in all patients. Some patients tend to have normal test results on CRP tests, ESR (sedimentation rate) tests, or anti-body tests like Rheumatoid factor and anti-CCP. Thus, the search for more tests, or one that is relevant to more people.

14-3-3η correlates with disease activity, even in low-CRP patients

A new test for Rheumatoid Arthritis that recently became available in the U.S., 14-3-3η, appears to gauge disease severity and reflect treatment response in many patients, including those with lower CRP. The abstract below published this month at EULAR shows 14-3-3η associates with response to anti-TNF therapy, even when CRP does not correspond with treatment response. This study of 112 patients was performed on banked blood samples.

Let us know about your real world experiences with this test.

Look closely at the author list of this EULAR abstract to see why I’m so interested in the results.

Background: There is an unmet need for RA markers that inform prognosis and treatment response. While RF and anti-CCP are useful, augmenting their predictive capacity with additional markers is desirable. CRP is routinely used to gauge response to therapy but remains low in a proportion of patients, limiting its clinical utility in that subgroup. 14-3-3eta, a soluble RA diagnostic marker, is involved in the disease process, complements RF and anti-CCP and is modifiable with anti-TNF therapy in RA and PsA.

Objectives: We examined whether positive serum 14-3-3eta corresponds with RA disease profile, and whether baseline titres inform response to anti-TNF therapy, also in patients with a lower CRP.

Methods: Serum 14-3-3eta was measured in banked samples of 112 patients with established RA (N=75; RAPPORT cohort) and early disease (N=37; TEACH and I-COBRA cohorts). Patients were biologically-naïve, median age 57 and 76% female. 14-3-3eta was considered +ve at >0.19 ng/ml and median differences in clinical variables between 14-3-3 eta +ve and -ve groups were evaluated using the Mann-Whitney U-test. For relationships between the clinical variables and 14-3-3eta, Pearson correlations were run. The 75 established RA patients were candidates for anti-TNF therapy and 14-3-3eta serum concentrations were additionally measured at ~15 weeks post-treatment. EULAR criteria were used to define Good response. Across the group and in patients with a low CRP (≤10mg/L), the significance of median differences in 14-3-3eta expression between Good EULAR responders and non-responders was evaluated using the Mann-Whitney U-test. A ROC curve and corresponding AUC was generated.