This is the 10th in a series on musculoskeletal ultrasound use in people living with Rheumatoid Disease (PRD). This is a critical topic for PRD that could have enormous impact on clinical care – positively or negatively – in light of results from two recent studies.

1) A study in 2006 showed 96% of patients judged by rheumatologists to be clinically in remission exhibit disease activity when measured with MSUS or MRI. [1]

2) Describing his study in Europe last summer, Dr. Stephen Kelly was emphatic that ultrasound reveals a “surprising” level of disease activity: “You can see raging inflammation in joints that are not swollen or tender.”[2]

The question from many patients has been: How do I gain access to MSUS and an operator who is trained to use it properly? There are few in the United States, so that’s a good question.

However, rheumatology professionals are considering other questions. Before practices face the burdensome expense of a power Doppler ultrasound machine and time for training to use it properly, the profession itself must establish what role ultrasound will play. Two recent studies offer thought-provoking conclusions. And perhaps caution for policy-makers.

Recent study uses MSUS to identify who gets DMARD escalation

A Scottish study[4] added MSUS of a “limited” set of joints to a DAS28 [disease activity measure that includes 28 swollen joints, 28 tender joints, an erythrocyte sedimentation rate (ESR) blood test, and a patient’s “global” estimate of her own health on a scale of 1 to 10].

What did they find?

In this study, the MSUS assessment provided additional information that led to modified treatment decisions in 29% of assessments of global disease activity. In 25% of those in “low disease activity” (DAS28<3.2) and 24% of those in “clinical remission” (DAS28<2.6), MSUS identified active disease which led to escalation of disease treatment (DMARDs). However, in 67% of assessments of “moderate disease activity” (3.2≤DAS28<5.1) with fewer than 2 swollen joints, MSUS failed to identify evidence of active disease, and “therefore prevented further DMARD escalation.” [Note: the MSUS was limited to a small subset of joints, and it is not known whether the actual swollen joints were examined with MSUS. For instance a patient could present with a swollen toe or knee, but the “limited set” may contain only hands / wrists. The authors repeatedly stated that limited joint sets are reliable.]

What did the investigators make of the majority of patients (67%) that had “moderate disease activity” according to the DAS28, but fewer than 2 swollen joints? This group had elevated mean ESR, tender joints, global health, and pain scores. Doctors decided not to escalate disease treatment since the MSUS findings supported the low swollen joint scores. The DAS28 score was attributed to fibromyalgia, “fibromyalgic” RA, or another non-inflammatory process.

The ESR, usually considered “an inflammatory marker” or an “acute phase reactant,” and the other symptoms are dismissed because rheumatologists are so confident in the relationship between swelling and disease activity. That has been a key discrepancy between rheumatologists and patients in recent years. And in this case, MSUS seemed to confirm the low level of clinically observable swelling, even though the authors admit MSUS’s well known greatest weakness, that “the technique is operator dependent.” [For a LIST of reasons MSUS training is critical – click here.]

Case closed, right? MSUS is the last word, and the people with few swollen joints during the exam obviously don’t have active disease. Right?

No, maybe it’s not so simple…

A study presented at the 2013 ACR meeting[5] could unravel the assumptions of the former one. “The power Doppler modalities of 5 ultrasound machines perform very differently on a microvessel flow phantom” compared the ability of 5 ultrasound machines to detect blood flow indicative of Rheumatoid disease activity. The investigators created a mechanical flow phantom to mimic blood fluid and provide a defined flow to be measured.

“Large differences” were found between the machines’ ability to detect low flows in small vessels. 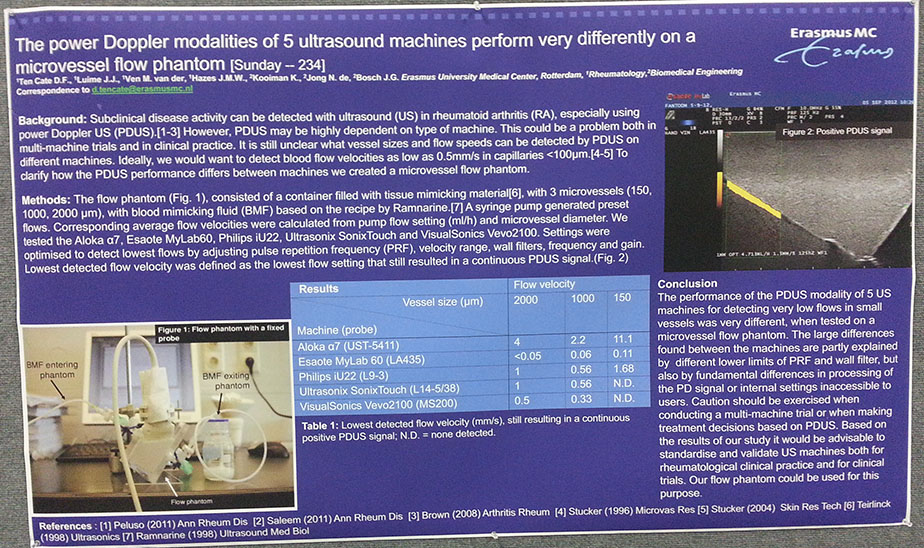 1) Some of the differences were attributed to “fundamental differences in processing” of the signal or internal settings not accessible to users. Therefore, even well trained users would not be able to adjust machines to accurately detect blood flow.

2) The authors (who have published other well-known MSUS studies) advise caution when making treatment decisions based on PDUS.

3) The study raises doubt about results of research trials which may have used multiple US machines.

4) The investigators recommend standardizing and validating ultrasound machines for clinical use.

A more complete explanation of the PDUS comparison study has been published.[6]

Here is the response of one rheumatologist I asked about the study: “It means the $20,000 machine in our office that works great for guiding needles, might not be the best for other things. If I don’t see inflammation with it, that doesn’t mean it’s not there.”

The audacious claims of the first study should alarm PRD who have longed for a “test” to confirm the Rheumatoid disease activity they experience. MSUS might not be that magic bullet – at least not unless it’s the right MSUS machine in the right hands. Understanding the common discrepancy between patient and rheumatologist understanding of disease activity is critical to proper treatment. Next time, we’ll take a fascinating peek behind the scenes at how doctors deal with that.

“Fibromyalgic RA” is the latest in an infamous long line of explanations for that fact that patients are aware of disease activity that rheumatologists cannot see. Good rheumatologists know this, and rely on patient reported outcome measures to bridge that gap. In fact, 75% of patients surveyed by the Rheumatoid Patient Foundation said they had experienced swelling without damage or damage without swelling.[7]

It‘s important to remember that any good tool, used the wrong way, can become a weapon. Do no harm should preclude certain approaches from becoming standard practice.

Edit: 8:53 am Added sentence about RPF which had been inadvertently deleted in editing.