In part 2 of this guest series, I present results of my own genotyping analysis provided by the direct-to-consumer (DTC) genetic testing company 23andMe, specifically with respect to the estimated lifetime risk of acquiring RA. To provide a somewhat balanced perspective, I also show the corresponding results of lifetime risk of RA for my sister, daughter, and 1st cousin, all of whom have been genotyped by 23andMe. Part 1 of this RA genetic series is available here.

Overview of genotyping for RA risk with 23andMe 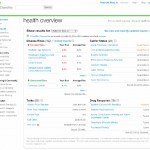 First, in the figure below I present an overview of how 23andMe genotyping results are displayed to the customer.

Others have written about DNA testing to research health disease ancestry or the general topic of using genetic testing with 23andMe; however I will restrict these comments to the first category, Disease Risks. This category is itself divided further into three sub-categories, Elevated Risk, Decreased Risk, and Typical Risk. The full set of results under each sub-category is made available to the customer by mouse-clicking on Disease Risks. In my case, results for RA are categorized (presently; more on this aspect later) under the Decreased Risk category. All other disease risks, while interesting, will not be discussed for purpose of this series. (Note: to those familiar with 23andMe genotyping, my data reflect results obtained from the V2 chip; the newer V3 chip provides updated information.) Currently, 23andMe and most other DTC genetic companies discuss genetic risk in terms of “average lifetime risk” (further discussion on the term “risk”). 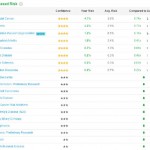 The panel summarizing Decreased Risk according to my genotyping results is shown on the right. Five stars indicates corresponding results that are backed by considerable established research investigations (references are provided). My results suggest that I have a 0.41X risk of developing RA in my lifespan, or about two and one-half times less likely than average. 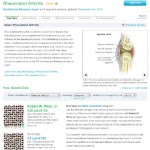 Tabs at the top of the figure allow migration to additional pages of information relevant to RA risk. Of those shown, the one I use most often is “Technical Report”; below I’ll provide specific information from it on my RA risk. Meanwhile, a glance at the panel in this figure titled Your Genetic Data shows that my average lifetime risk of RA is presently 0.98 (rounded up to 1.0 in the preceding figure), versus that of the average population risk (European mainly) of 2.4. Again, this is another representation suggesting I am at about two and one-half times less likely to develop RA over my lifespan than an average individual of European descent. Explaining how best to interpret this single piece of information would require a full post itself, and for now I will defer to a later post in this series. Next, however, I want to focus on the specific genetic findings used to establish this particular risk value for RA in my genotyping results.

How risk of RA is established with genetic results

Genetic results from 23andMe are illustrated in two separate ways, first by a summary figure and second by individual risk gene variant (or “allele”) tables.  The term “variant” implies more than one version of nucleotide base at a given location in the corresponding gene or locus. Such variants or alleles are often affiliated with different outcomes regarding both risk for developing RA as well as potential, specific disease manifestations once acquired.

First, the summary figure representing my genotyping results for RA is below. This figure shows 9 distinct genetic variants presently tested by 23andMe which are known to impact risk of developing RA from a particular type of research study known as “genome-wide association study” or GWAS. The details are explained in the adjacent legend. One of the nine variants, PADI4, is found only in Japanese populations, reducing the relevant number of genetic variants linked to RA for Europeans like myself to eight, presently. Of those 8, I happen to carry 7 genetic variants placing me at decreased risk of RA, versus one variant placing me at increased risk. The variants are not of equal weight regarding the amount of lifetime risk imposed on the holder; some have much more relevance to developing RA than others (discussed in the next post). Nevertheless, the overwhelming conclusion from these results is that my genetic profile suggests I am less likely than average to develop RA within my lifespan. 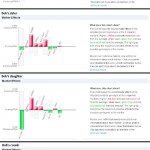 By comparison, the results for three female members of my family, all of whom are at increased risk of RA solely due to gender, are shown below. Although all are also clearly at increased genetic risk of RA with respect to me regarding the 8 relevant genetic variants tested by 23andMe, indicated by the red bars (involving both number of red bars as well as height) in the corresponding figures, none has been diagnosed with RA, while only one is above average age of onset (usually > 40 years old) and shows any possible symptoms (cousin).

Of course, everyone knows that phenotype (disease onset and manifestations) is a product of genes X environment (GxE), and that the relationship between these two variables with respect to any given disease is unique.  In the specific case of RA, the contribution of heredity to disease risk is shown in the figure below, and indicates that a genetic contribution to RA disease risk falls between one-half and two-thirds of the total risk, with environmental contributions (e.g. in the case of RA, smoking) accounting for the remaining one-third to one-half. 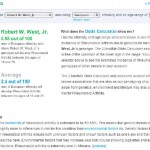 Greater detail regarding the results presented above is provided in table form by 23andMe, shown in the nine distinct but related tables in the figure (below). Each section presents a distinct gene or region or locus having a unique and quasi-independent effect on risk of RA. Where a specific gene is identifiable, as in the case of “PTPN22,” a biological target of RA for therapeutic purposes is available. By contrast, where a specific gene is not identifiable in affiliation with the corresponding genetic variant, as in the case of “HLA region”, the variant is currently useful for diagnostic but not therapeutic purposes. Importantly, the exact genetic variant involved at each gene/locus is provided, indicated as an “rs” number (rs = “reference SNP”; SNP = single nucleotide polymorphism) which can be used for investigative purposes at other online genetic analysis programs such as SNPedia as well as while exploring the original literature. So, for example, the genetic variant responsible for RA risk at the HLA region is designated rs6457617. Two other bits of information are provided for each variant: Genotype, discussed later, and Adjusted Odds Ratio, where a number lower than 0 indicates decreased risk (proportionately) while a higher number indicates increased risk.  The numbers in this table correspond to those in the respective summary figure above for me. 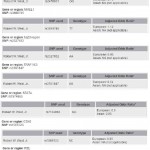 As stated in part 1 of this series, the above information is useful mostly as a foot-in-the-door approach to a discussion of RA genetics. The next post will describe in more detail the specific genes, variants, biological pathways and functions, and most importantly, describe present limitations with genetic approaches to diagnosing and treating RA. The reader will rapidly come to appreciate both the promises and perils of investing precious resources (time and money) in this particular approach to understanding and treating human disease conditions.

Note: I hope you’re enjoying this guest series on genetics and RA by Bob West. Stay tuned for more!

14 thoughts on “Direct to Consumer Genetics of Rheumatoid Arthritis (RA)”