Studying the effect of Rheumatoid Arthritis (RA) on tendons

Tenosynovitis is one of the common features of rheumatoid arthritis in the hand. It affects both the extensor and flexor tendons, sometimes leading to granulomatous involvement and tendon rupture. The commonest sites of rupture are well known but the areas of more general tendon involvement are less understood.

As recently as November 2012, rheumatologists from Japan presented “The Number of Ruptured Tendons As a Prognostic Factor for Reconstructing Extensor Tendon Rupture in Patients with Rheumatoid Arthritis” at the American College of Rheumatology (ACR) Scientific Meeting:

Even if not well understood, tendon involvement in Rheumatoid Arthritis is well established

Moroccan investigators have shown that tendon sheath involvement is common and that ultrasound is more sensitive to detecting it. They recommend further investigation because “Tenosynovitis is widely accepted to be common in RA and postulated to be the first manifestation of RA, but its true prevalence in early disease and in particular the hand has not been firmly established.”

The impact of tendon involvement in Rheumatoid patients 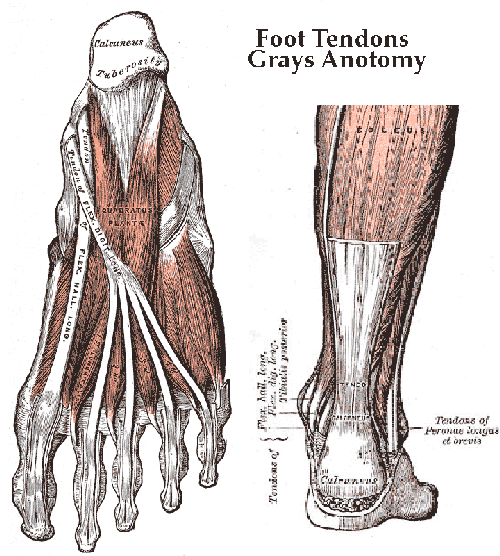 According to the American Academy of Orthopedic Surgeons, “Rheumatoid arthritis is not an isolated disease of the bones and joints. It affects tissues throughout the body, causing damage to the blood vessels, nerves, and tendons.” Tendons are actually the cause of much disfigurement caused by Rheumatoid disease. Such problems are more evident in hands and feet because the bones and muscles are smaller, but any tendon or supportive tissue can be affected. For example, trigger finger, a common problem with RA, is caused by a form of tenosynovitis. Surgeons can sometimes relieve pain or correct deformities caused by the effects of Rheumatoid disease on tendons: “To fix the bend in the toes themselves, the surgeon may suggest cutting a tendon or removing a small portion of bone of the toes to allow them to straighten.”

We’ve discussed the significance of tendonitis and tenosynovitis with regard to Rheumatoid disease activity (see list of articles below). Patients might notice symptoms like pulling, stretching, spasms, weakness, or cramping. From experience, I can attest to the rubber banded toes, and hands or feet that seem to possess a mind of their own. Like most Rheumatoid disease activity, the usage principle can be a factor.

We should not underestimate Rheumatoid disease by being fooled into thinking it remains in the synovial membranes of MCP joints.

That’s a common notion, but tendons are frequently involved in RA. In a poster session at ACR last fall, Italian investigators presented “US Examination of Wrists and Hands: A Comparison Between Rheumatoid Arthritis and Psoriatic Arthritis.” They used ultrasound to compare tendon involvement frequency between RA and PsA wrists and hands. They found no difference in tendon involvement frequency, but found more aggressive inflammation of the tendons in patients with RA who had tendon involvement (see image below). They reported “no other significant differences in the results of the two groups.”

Postblog: Combatting confusion like this is one reason RAW exists. Tendon involvement is on a recent list of symptoms dismissed as not related to Rheumatoid. When a rheumatologist is dismissive, an expert in the specific specialty is usually helpful (such as the orthopedic surgeons above or a spine doctor, eye doctor, or skin doctor).